Camp Bucca: Nine of Ten I.S Leaders Did Time in This 'Pressure Cooker For Extremism'

NEW DELHI: Between 2003 and 2009, Camp Bucca, in the vicinity of Umm Qasr, Iraq along the Kuwait border, served as a detention facility maintained by the United States military. The US military described Camp Bucca as a “model prison”, reorganising the detention facility and transferring a larger number of prisoners to it after the Abu Ghraib abuse scandal. The 100-acre facility housed 20,000 inmates in cinder block housing units. Inmates administered classes, competed in sports, and cigarettes, tea, and the opportunity to listen to radio and watch television were used as incentives to reward good behaviour. In the years it was operational, Camp Bucca channeled 100,000 detainees through its barracks. The most interesting aspect of Camp Bucca however, is the formative role the facility played in the rise of the Islamic State. 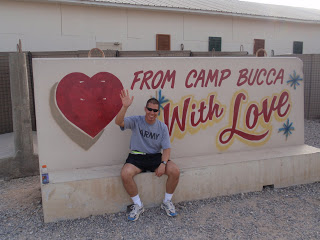 (A US soldier poses at Camp Bucca).

The group’s leader, Abu Bakr al-Baghdadi, it seems, spent five years at the facility. In 2003, when the US invaded Iraq and acquired Camp Bucca, Baghdadi was earning a degree in Islamic Studies in Baghdad. Those who knew him at the time described him as quiet and studious, and as an impressive football player. In an interview with The Telegraph, Abu Ali -- who knew Baghdadi as a teammate and from attending prayers at the local mosque, said, in reference to the militant leader, “He was the Messi [reference to Argentinian footballer Lionel Messi] of our team… He was our best player.”

Within a few years of the US invasion, Baghdadi was a prisoner at Camp Bucca, for reasons that remain murky. According to an article in Mother Jones, reports differ on whether on he was held as a "civilian internee" at the prison for 10 months in 2004 or if he was captured by US forces in 2005 and spent four years, or both. The reason why Baghdadi was held is also unknown. In fact, a controversial Red Cross report notes that a vast majority of Iraqi inmates, as high as 90 percent, were arrested “by mistake.”

Apart from Baghdadi, the Islamic State’s number two, Abu Muslim al-Turkmani, and number three, leader of foreign fighters, Abu Qasim were incarcerated at Camp Bucca. Abu Ayman al-Iraqi and Adnan Ismail Najm (now deceased), members of the Islamic State’s military council and both former officers in Saddam Hussein’s army, also served at Bucca. Haji Samir, aka Haji Bakr (now deceased), formerly a colonel in Iraqi army, too was detained at Bucca and on his release, joined Al Qaeda, going on to play an important role in the Islamic State in Syria. 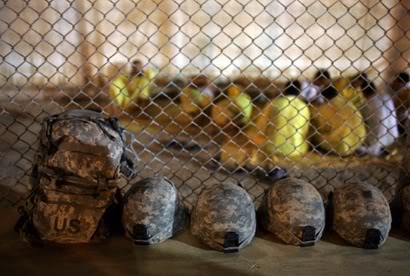 As the Islamic State made rapid advancements in Iraq and neighbouring Syria, James Skylar Gerrond, a former US Air Force security forces officer and a compound commander at Camp Bucca in 2006 and 2007, tweeted that he believed that the conditions at the camp created a “pressure cooker for extremism."

Gerrond is not the only one to suggest that Camp Bucca had a role in radicalising its detainees. In 2007. Maj. Gen. Douglas Stone, then deputy commander for detainee operations, told Newsweek that the role of facilities like Camp Bucca in radicalizing inmates was “a very real concern.”

In an article in the New York Times this month, military veteran Andrew Thompson and academic Jeremi Suri,, wrote, “Before their detention, Mr al-Baghdadi and others were violent radicals, intent on attacking America… Their time in prison deepened their extremism and gave them opportunities to broaden their following. The prisons became virtual terrorist universities: the hardened radicals were the professors, the other detainees were the students, and the prison authorities played the role of absent custodian.”

“Simply being a “suspicious looking” military-aged male in the vicinity of an attack was enough to land one behind bars. There were 26,000 detainees at the height of the war, and over 100,000 individuals passed through the gates of Camps Bucca, Cropper and Taji. Quite a few were dangerous insurgents; many others were innocent,” the Times piece continues.

A 2009 article in Al Jazeera quotes former inmates describing how Camp Bucca led to radicalisation. Adel Jasim Mohammed, a former detainee of Camp Bucca said, “Extremists had freedom to educate the young detainees. I saw them giving courses using classroom boards on how to use explosives, weapons and how to become suicide bombers… In 2005, an extremist was sent to our camp. At first, Sunnis and Shias rejected his teachings. But we were told that he was imposed by the prison authority… He stayed for a week and recruited 25 of the 34 detainees - they became extremists like him.”

In 2007, policies at Camp Bucca changed, and there was an attempt to separate the more extremist inmates from the more moderate. However, the damage was already done, with the facility for four years having served as a place to network, recruit and preach. Even after the reforms, extremism dictated terms.

“The compound’s “emirs” controlled the prison population. Detainees, for example, refused to watch television or play ping-pong, lest they face the judgment of the Shariah courts. Moderate detainees suffered repeated physical assaults from radicals. When they fought back, they were punished by the prison authorities,” the Times piece notes.

To complicate matters further, those managing the prison had little understanding of the local language or culture. A military report notes that detainees were organised along sectarian lines and inmates used Islamic law to settle disputes. “Inside the wire at these compounds are Islamic extremists who will maim or kill fellow detainees for behavior they consider against Islam,” the military report said.

The article in Mother Jones explains the unique setting of Camp Bucca: “Bucca.. thrust together Saddam Hussein’s Baathist secularists and Islamic fundamentalists, set the stage for something perhaps worse: collaboration. At the prison, the two seemingly incongruous groups joined to form a union “more than a marriage of convenience.””

In 2009, when Camp Bucca closed down, hundreds of its detainees were freed. The more extremist of the lot, of course, were transferred to different facilities. Again, barriers relating to language and culture ensured that there were errors in determining extremism. As the more radicalised inmates left the prison, they spoke of one thing -- revenge. As the Islamic State grew and began capturing territory in Iraq, it freed hundreds of inmates, who, in turn, swore their allegiance to the militant group, breeding a vicious cycle of extremism and radicalisation -- the seeds of which were sown by the US-run detention facilities in the country.