No Hurricane Aid If You Boycott Israel, Says Texas City 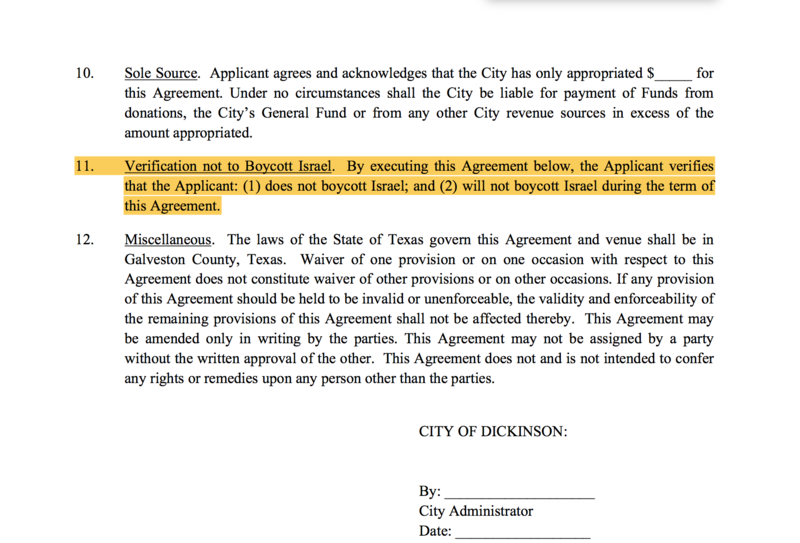 An official contract requires residents of Dickinson, Texas, to certify they won’t boycott Israel as a condition for receiving aid to rebuild after Hurricane Harvey.

A city in Texas is requiring residents to verify that they do not boycott Israel in order to receive aid to rebuild from the devastation of Hurricane Harvey.

Civil liberties defenders are calling the measure a violation of the US Constitution.

The Electronic Intifada has found that several major cities in Texas are also requiring similar verification from people who want to do business with them.

An official form for residents of Dickinson to apply for city aid to rebuild hurricane-damaged homes and businesses requires certification that the applicant “does not boycott Israel” and “will not boycott Israel during the term of this agreement.”

The Houston suburb of about 20,000 residents was one of the areas hardest hit by Hurricane Harvey. Ninety percent of the town was flooded and local authorities say that 7,000 homes and almost 100 businesses were seriously damaged.

“The First Amendment protects Americans’ right to boycott, and the government cannot condition hurricane relief or any other public benefit on a commitment to refrain from protected political expression,” Andre Segura, Texas legal director for the American Civil Liberties Union, said.

“Dickinson’s requirement is an egregious violation of the First Amendment, reminiscent of McCarthy-era loyalty oaths requiring Americans to disavow membership in the Communist party and other forms of ‘subversive’ activity.”

The ACLU said the measure appeared to be an effort to enforce a recently passed Texas law that requires all state contractors to certify that they are not participating in boycotts of Israel.

When signing that law, Governor Greg Abbott declared, “Anti-Israel policies are anti-Texas policies, and we will not tolerate such actions against an important ally.”

An examination of the websites of about a dozen other hurricane-affected Houston-area municipalities did not turn up similar measures to Dickinson’s.

But guidelines issued in September by the city of Galveston for contractors wanting to bid for neighborhood projects contain an Israel anti-boycott provision. The Galveston police also issued a tender for uniforms that requires bidders to verify they don’t boycott Israel. The cities of Austin and San Antonio have adopted similar provisions.

Texas is one of 21 states to adopt measures ostracizing or attempting to restrict the boycott, divestment and sanctions (BDS) movement for Palestinian rights.

This month, the ACLU filed a lawsuit on behalf of a teacher in Kansas who is being required to repudiate boycotts of Israel as a condition for taking on a state contract as a trainer.

Amid a national furor of the claimed right of Nazis and white supremacists like Richard Spencer to speak on college campuses, establishment media and politicians seldom criticize the growing censorship around Israel.

But journalist Glenn Greenwald commented that the move by Dickinson again demonstrates that “the greatest and most frequent threat to free speech in the West is the attempt to criminalize and outlaw activism against Israel.”

Drawing a contrast with the panic over often dubious claims of Russian interference in the 2016 US election, journalist Max Blumenthal quipped that the Texas municipality’s tying of aid to a recipient’s views on Israel amounts to “the kind of foreign meddling our elites tolerate.”

Currently, the US Congress is considering the Israel Anti-Boycott Act, which could impose prison and heavy fines on companies or their personnel accused of abiding by boycotts of Israel called for by international organizations.

The Israel Anti-Boycott Act currently has 266 sponsors in the House and 50 in the Senate.

Over the summer, the ACLU wrote to senators condemning the bill for violating constitutional free speech rights.

Due to sustained pressure from legal groups and activists, a handful of US lawmakers have pulled their supportof the bill.

The powerful Israel lobby group AIPAC has made passing the bill one of its top legislative priorities.