NEW DELHI: A report by the American Association for the Advancement of Science (AAAS), in collaboration with the University of Pennsylvania Museum of Archeology and Anthropology and the Smithsonian Institute, uses high resolution satellite imagery to examine the current status of Syria’s world heritage sites. Syria has been racked by a civil war and now, air strikes and military response to the advancement of the Islamic State. 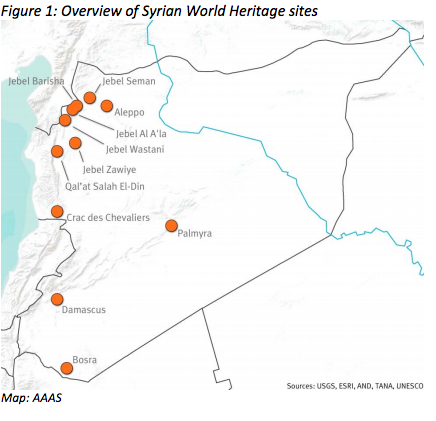 The report states that the purpose of the assessment was to determine the “current status of each site.” It concluded that five of the six world heritage sites in Syria exhibit “significant damage.” Damage was observed at every site except for the ancient city of Damascus.

The Ancient City of Aleppo

Aleppo has witnessed much violence. The report notes that “considerable damage was seen within the old city, including damage to the Great Mosque of Aleppo and the ancient Suq al-Madina covered market. Since then, the fighting in Aleppo has intensified, which has led to damage to multiple important historical sites throughout the ancient city.

Figure 2: Damage to the Great Mosque and the surrounding area 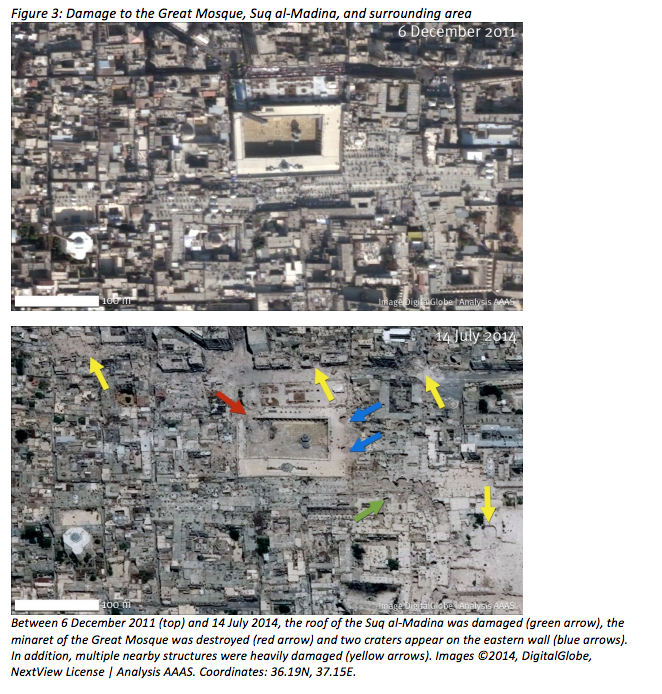 Much of the heaviest damage was concentrated in the area immediately south of the citadel. This area contains government buildings, such as the Ministry of Justice headquarters, a police headquarters, and the Grand Serail of Aleppo -- which was the main government building in the city under the French mandate. Other historical structures that were damaged and destroyed include the Hammam Yalbougha an-Nasry (late 15th century), the Khusruwiye Mosque (mid 16th century) and the Carlton Citadel Hotel (19th century).

Figure 3: Damage to the area south of the citadel 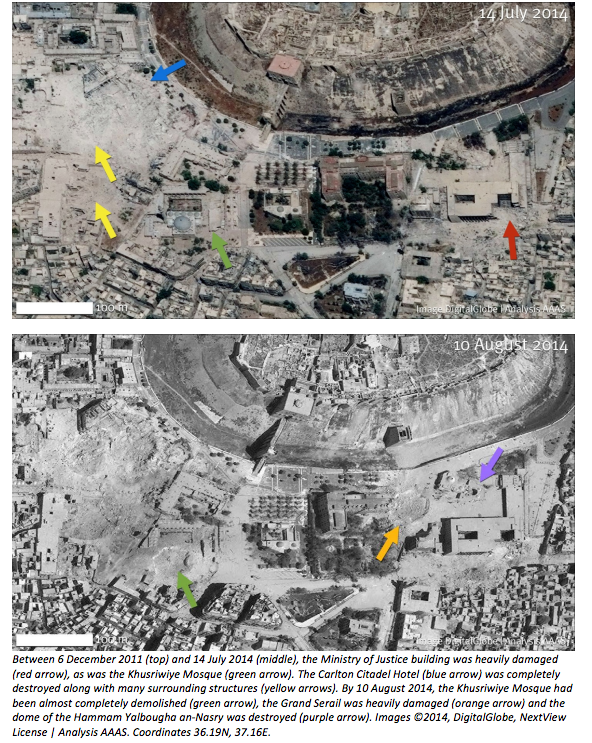 The Ancient City of Bosra

Bosra and its surrounding region in the Da’ara governorate have seen increasing violence during the conflict. Signs of this violence is evident in the imagery of Bosra, and include roadblocks, destroyed buildings and earthen fortifications in the modern city. Within the boundaries of the world heritage site, the Roman theater, often considered the primary attraction of the ancient city, showed no visible sign of damage. However, earthen ramp construction over a staircase seemed evident.

Figure 4: The Bosra Roman theatre and nearby sites 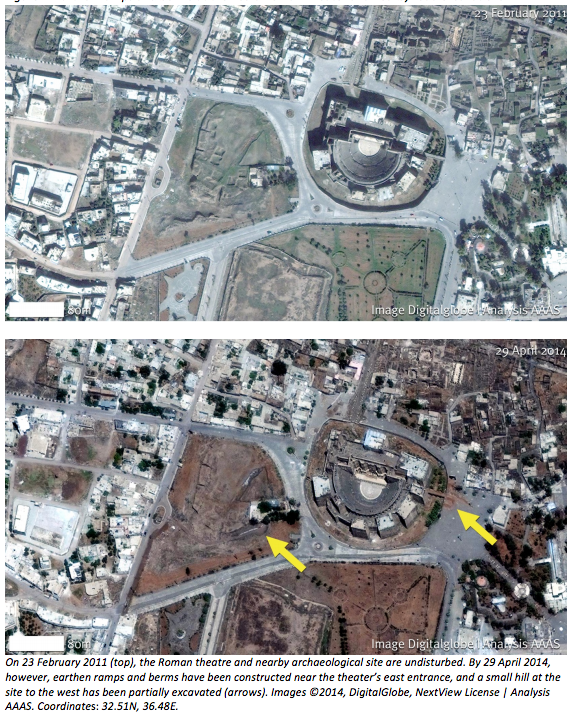 Further, in the northern portion of the heritage site, two small high-albedo areas are visible in a pattern that is consistent with mortar impacts. A hole observed in the nearby Al-Omari Mosque (AD 720) provides further evidence that this area was bombarded by mortars. 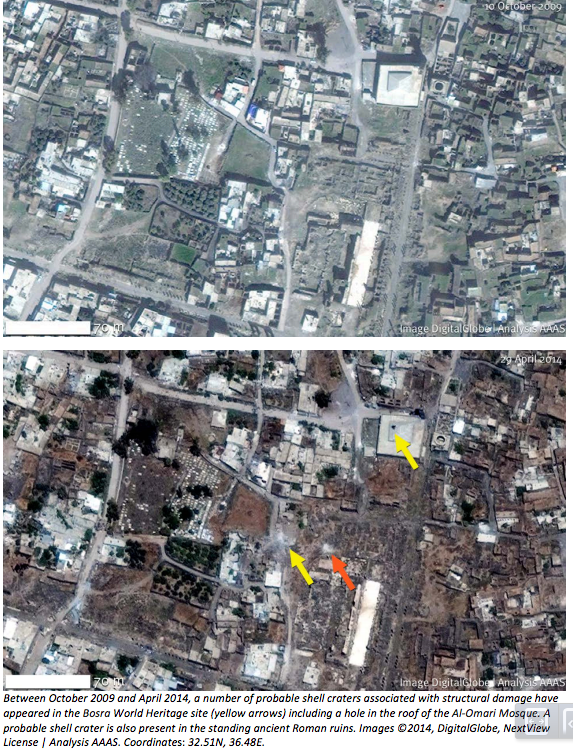 The Ancient City of Damascus

The report, whilst noting that the Syrian Ministry of Culture’s Directorate-General of Antiquities and Museums has reported mortar damage in the vicinity of the old city, satellite images employed in the report’s analysis “could not identify or locate this damage.” The ancient city of Damascus, fortunately it seems, has been protected from the violence that has impacted surrounding areas.

The Ancient Site of Palmyra

The ancient site of Palmyra and its surrounding archaeological area have all sustained significant damage, the report notes. The satellite images show new roads, flanked by earthen berms, cut through the Northern area of the Palmyra Archeological Park, and groups of military vehicles occupying fortified positions, as well as a parking area built atop the ancient city wall, which was destroyed by the construction.

Figure 6: Disruptions in the northern section of the Palmyra archeological park 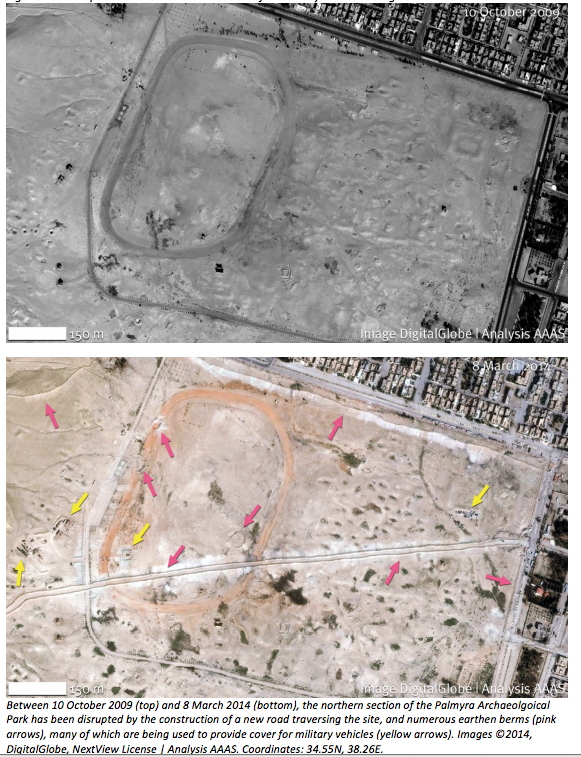 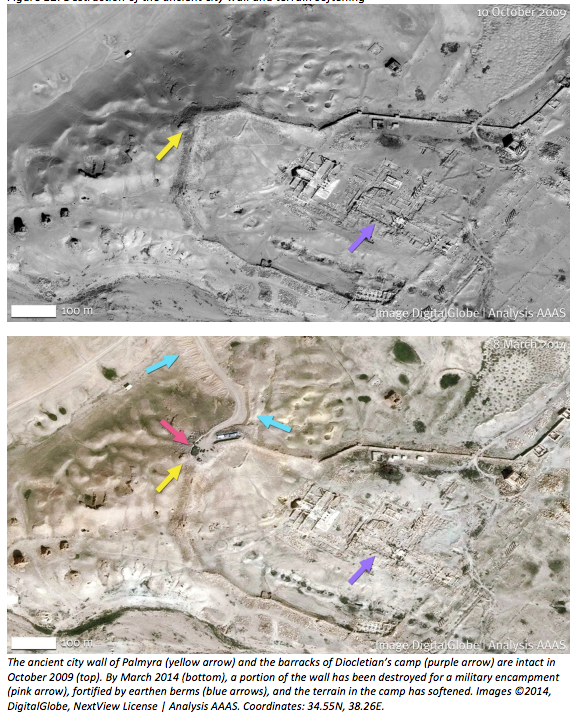 The Ancient Villages of Northern Syria

The ancient villages of northern Syria are also known as the “Dead Cities.” Marked by an abundance of standing archeological ruin dating back to 1st - 7th centuries, the villages are at risk because of their proximity to contested areas. Bab al-Hawa is a major border crossing between Syria and Turkey and the entry point for supplies to armed combatants throughout Syria.

Further, there is concern regarding the rehabilitation of Internally Displaced Persons (IDPs). World heritage sites in northwestern Syria have reportedly been used as locations to house IDPs as well as armed combatants.

Figure 8: Ground photos of a tomb from the site of Al Bara in the Jebel Zawiya Archaeological Park 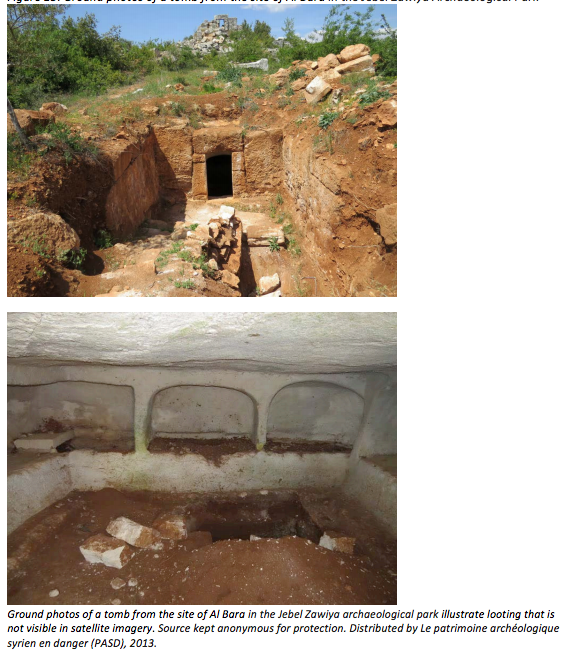 Satellite images also show changes to the archeological park. There seems to be a creation of two compounds: two inside the park and one outside it.

Figure 9: The creation of new compounds at Jebel Barisha 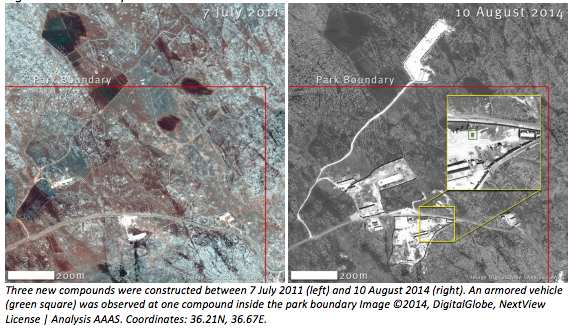 At the northern compound, 148 structures, possibly tents, were observed.

Figure 10: Tents at the northern compound 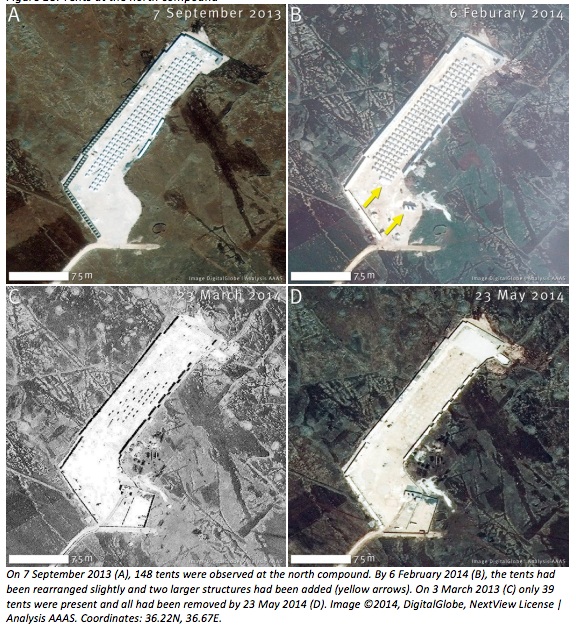 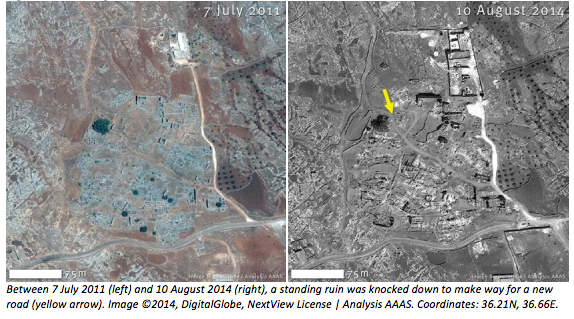 Satellite images indicate that Crac de Chevaliers suffered moderate structural damage. There seem to be craters that have penetrated the lower part of the structure, and some damage to the northern wall. Qal’at Salah El-Din seemed to suffer no visible damage, although a single structure, which may have been temporary, seems to have disappeared between 2010 and 2014. 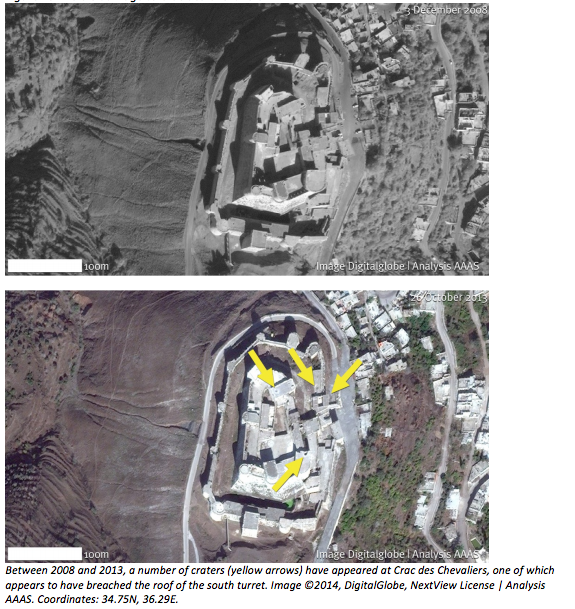