RAMALLAH: Denmark with this landslide vote has become the first European state to publicly commit to supporting the soon-to-be-issued UN list of companies operating in or with Israel's illegal settlement enterprise.

This sets an important precedent that help in pressuring other European national parliaments and the European parliament to make similar commitments to the UN list as a first step towards meeting Europe's obligations under international law and ending decades of deep European complicity in maintaining Israel's crimes against the Palestinian people.

The fact that the only Danish party to vote against this measure was the far-right, "borderline fascistic" Danish People's Party is no surprise. As Israel's international popularity plummets to new lows -- competing with North Korea's, according to a recent BBC poll -- far-right and fascist parties in Europe, the US, India and Latin America are increasingly becoming Israel's best, most reliable friends in the world.

One of the effects of "Trumpism" is that it has become sanitized to be openly anti-Semitic as long as you love and support Israel's far-right regime of oppression against the Palestinian people.

In this new Trump-Netanyahu era, one can indeed openly be an anti-Jewish bigot while upholding Israel as a model.

India's far-right ruling party can reconcile its Nazi-inspired anti-Semitic past (couched present as well, some argue) and current fascist ideology with its unprecedented love fest with Israel and its purchase of billions of dollars worth of "field-tested" Israeli weaponry.

The leader of the alt-right in the US can openly cheer Israel as the model and justify his group's white supremacy, anti-Semitism, Islamophobia and racism against all people of color as a pursuit of "white Zionism."

Israel can in this era overtly establish "unholy alliances" with neo-Nazi and other fascist European parties from France, Germany, Austria, Netherlands, Norway, Italy and elsewhere who look up to Israel's own fanatic regime as a model in racist exclusionary politics and, crucially, in getting away with total disregard for international law and basic human rights principles.

The following cartoon by John Brown in Haaretz quite brilliantly captures the gist of this new era: 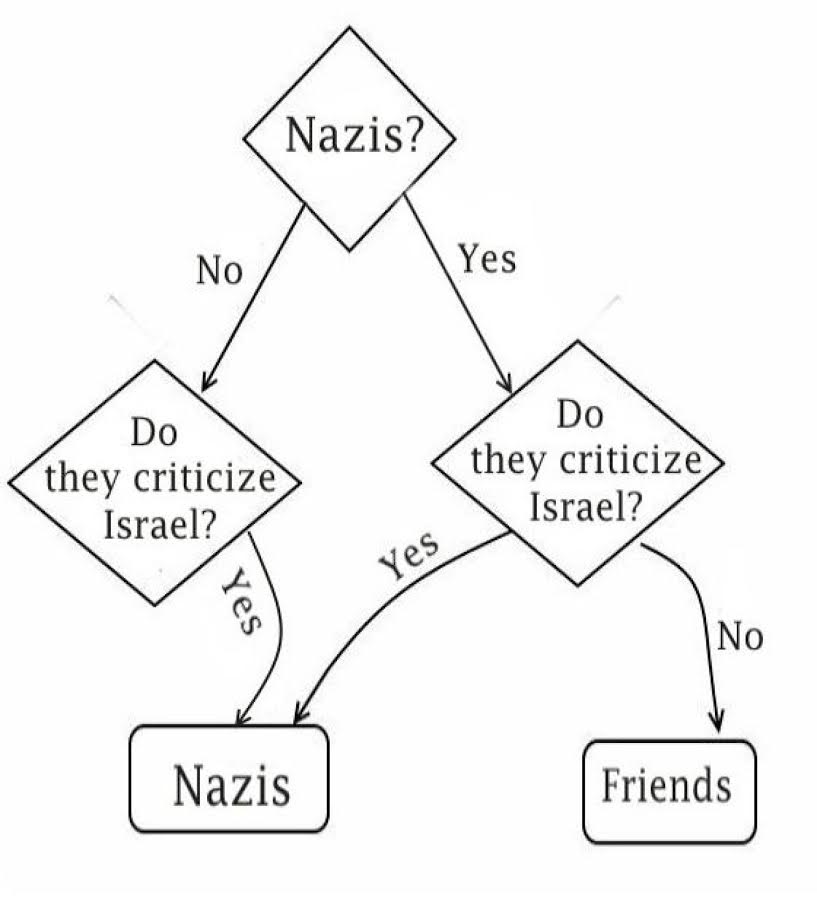 ​For an insightful analysis of this phenomenon of Zionist anti-Semitism, I highly recommend buying the collection of essays produced by Jewish Voice for Peace, On Antisemitism, and reading this article in the New York Times by Omri Boehm. Here's part of what he says:

"... by denying liberal principles, Zionism immediately becomes continuous with — rather than contradictory to — the anti-Semitic politics of the sort promoted by the alt-right. The idea that Israel is the Jews’ own ethnic state implies that Jews living outside of it — say, in America or in Europe — enjoy a merely diasporic existence. That is another way of saying that they inhabit a country that is not genuinely their own. Given this logic, it is natural for Zionist and anti-Semitic politicians to find common ideas and interests."

With enemies like these, it is much easier to make friends!