Journalist, Children Shot Dead by Israel: Who Is The Terrorist Now?

Nine Palestinians were killed on Friday as Israel ignored calls for restraint in its use of force against unarmed protesters in Gaza for the second week in a row. 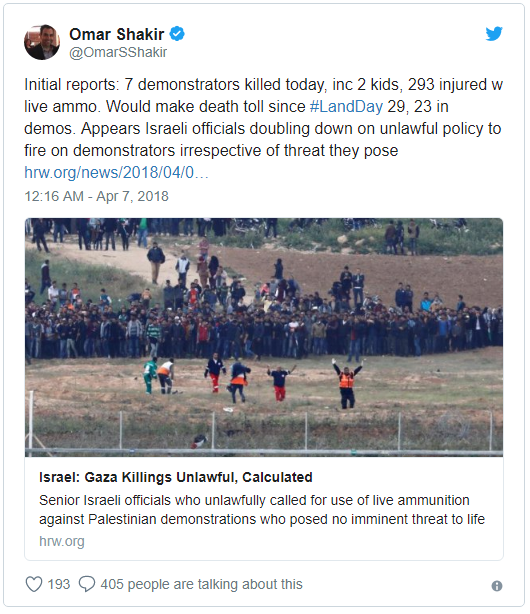 Journalist Yaser Murtaja, shot while wearing a vest marking him as a member of the press, was among those killed: 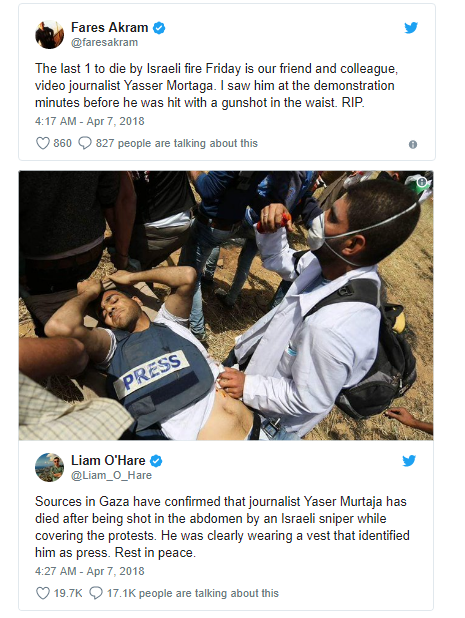 Two of those killed were children under the age of 18: Hussein Muhammad Adnan Madi, 13, shot in the stomach with live fire east of Gaza City, and Alaa al-Din Yahya Ismail al-Zamli, 15, fatally wounded east of Rafah. 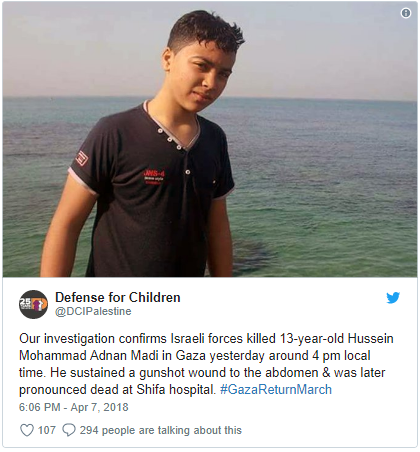 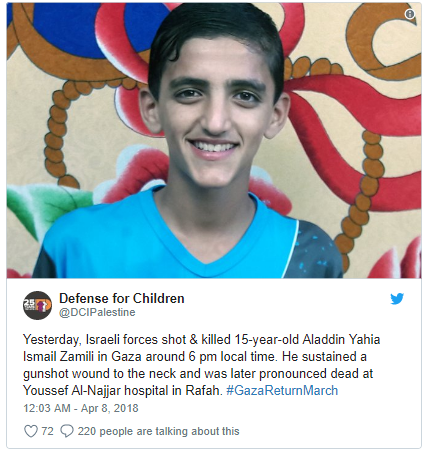 In Khan Younis, also in Gaza’s south, Usama Khamis Musallam Qudeih, 29, died after he was shot in the head by soldiers. 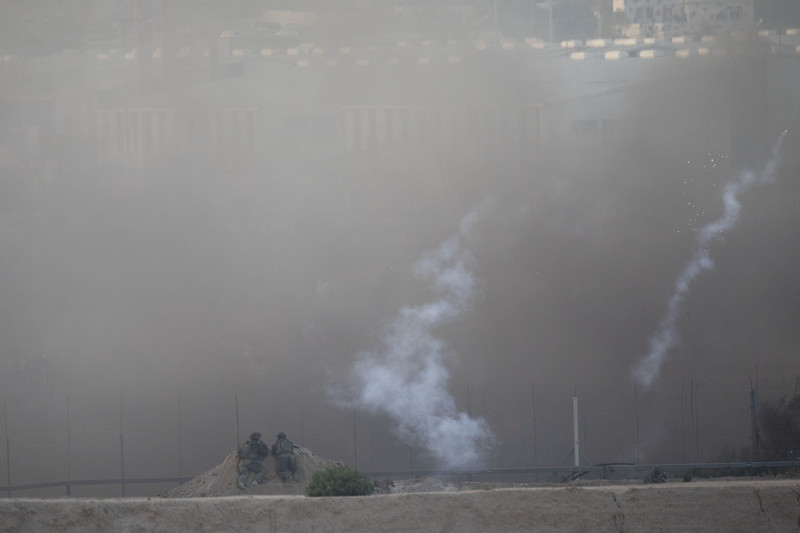 Photo taken from the Nahal Oz kibbutz in southern Israel shows soldiers using tear gas and live ammunition as Palestinians burn tires during a protest on the Israel-Gaza boundary on 6 April.

In central Gaza east of Deir al-Balah, two Palestinians died after they were shot in the head by soldiers: Ibrahim Ziyad Salameh al-Ar, 20, and Sudqi Talib Muhammad Abu Ateiweh, 45. Both men were from Nuseirat refugee camp.

Hamza Abd al-Al, 20, was also shot and killed in the eastern boundary of central Gaza.

In northern Gaza, Majdi Ramadan Mousa Shbat, 38, died after he was shot in the neck with live fire.

An eighth victim, Thaer Muhammad Rabaa, 30, died on Friday from injuries he sustained during the first day of the Great March of Return protest in northern Gaza, on 30 March.

A photo of Rabaa circulated on social media after his death: 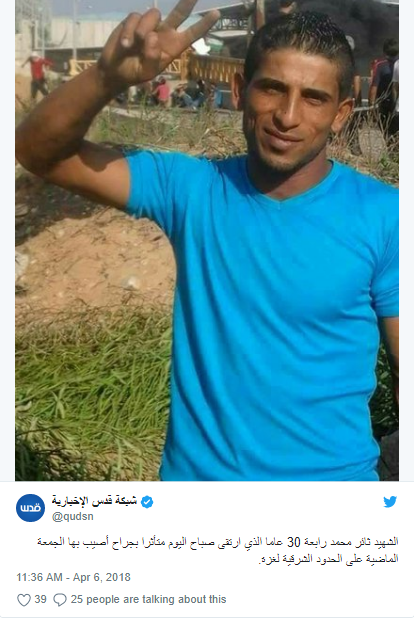 Israeli forces have killed 31 Palestinians in Gaza, including 27 during protests, since 30 March – which Palestinians mark annually as Land Day. Rallies are planned to continue through to Nakba Day, the 15 May commemoration of the 1948 ethnic cleansing of Palestine.

While there has been broad participation in the festival-like rallies, Israel has responded to them by deploying snipers with shoot-to-kill orders.

Three of those killed since 30 March were children, including 17-year-old Ibrahim Abu Shaar, whose age was confirmed by Defense for Children International Palestine on Friday: 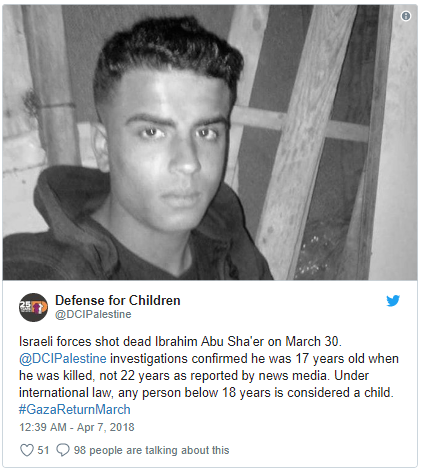 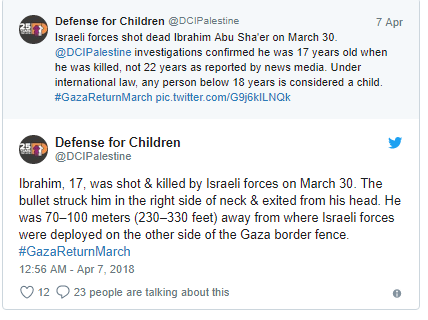 Palestinian outlets circulated “before and after” images claiming to show, on the right, snipers positioned on a hill before tires were burned and, on the left, an evacuated post after they were set on fire: 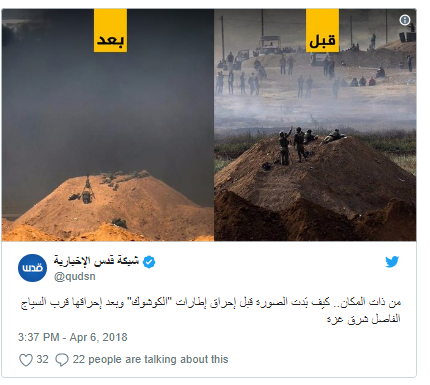 Israeli journalists reported that the military deployed giant fans and “the most powerful fire truck available in Israel, usually stationed in the oil refineries”: 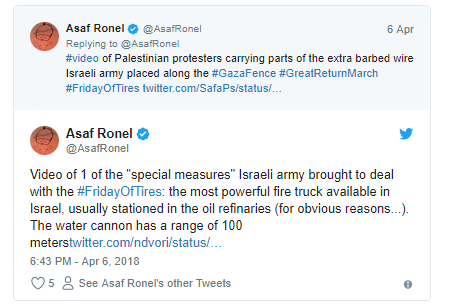 Photos from the protests circulated on social media show Palestinians improvising methods to protect themselves from tear gas fired by soldiers: 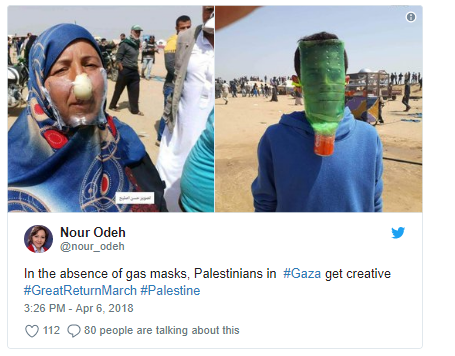 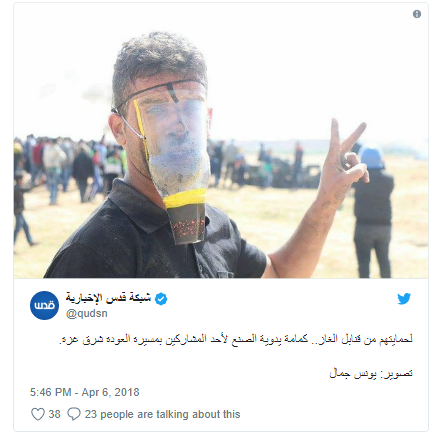 Despite these efforts, more than 1,300 Palestinians were injured – around 30 of them critically – by Israeli forces in Gaza on Friday. Nearly 500 were injured by live fire, the Gaza health ministry stated.

In addition to protesters, Israeli forces injured at least three journalists in Gaza on Friday: 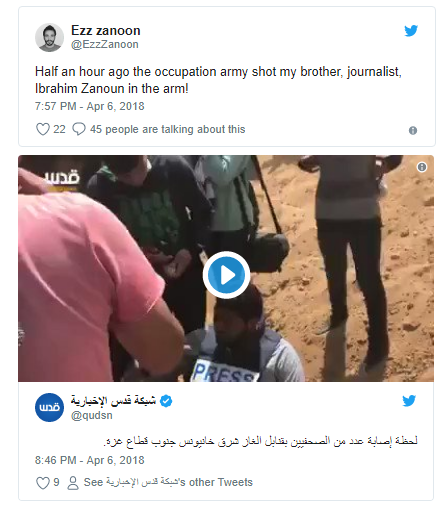 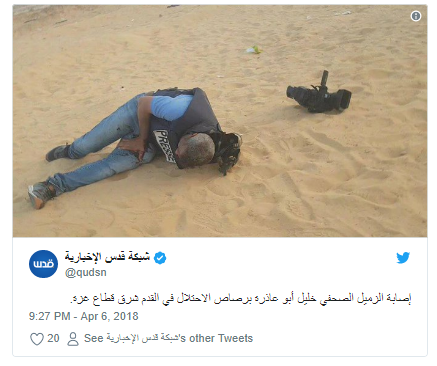 The Committee to Protect Journalists put out an advisory to reporters covering Friday’s protests, after 10 Palestinian journalists were injured during protests on 30 March.

“Journalists reported being targeted by both live fire and tear gas up to 500 meters from the Gaza-Israel border [sic] fence,” the watchdog group stated.

“This is despite Israeli authorities having set a 300-meter limit for approaching the fence, according to news reports.”

Palestinian paramedics set up medical posts ahead of Friday’s rallies, as more than 1,500 demonstrators were injured during last week’s protests – half of them by live fire. 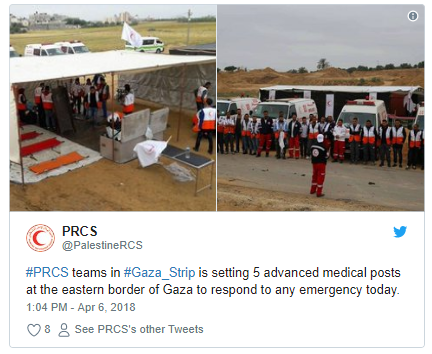 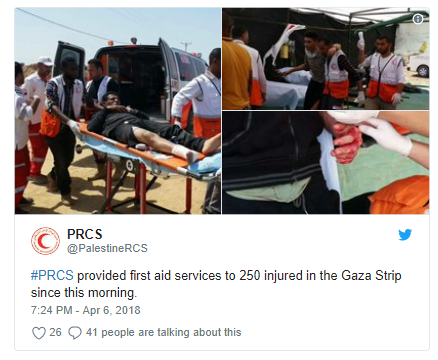 A photo from Friday shows a paramedic, his own leg bandaged, treating an injured protester: 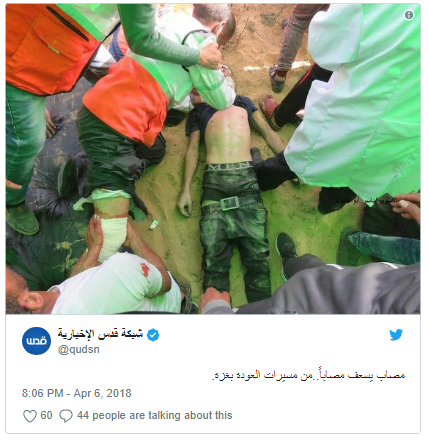 The hundreds of injuries over the past two Fridays of protest have further strained Gaza’s already embattled health system.

Government-run hospitals in Gaza “were overwhelmed by the number of injuries, with urgent needs reported for anesthesia and other essentials,” the United Nations Office for the Coordination of Humanitarian Affairs (OCHA) stated on Friday.

Gaza’s ministry of health “also reported that medical supplies needed for emergency and trauma management continue to deplete,” and replacements from its counterpart in the West Bank “are yet to arrive,” OCHA added.

“In a visit to al-Shifa hospital, the largest in Gaza, where a state of emergency had been declared, OCHA witnessed 115 injured in the operation rooms, departments of intensive care, orthopedics and trauma departments.”

The Palestine Red Crescent Society has “also warned of a shortage of medical supplies and of personal protective equipment for their 400-person team deployed across Gaza.”

Paramedics at the protests were overwhelmed by the number of injuries, with two of the Red Crescent’s posts unable to cope. 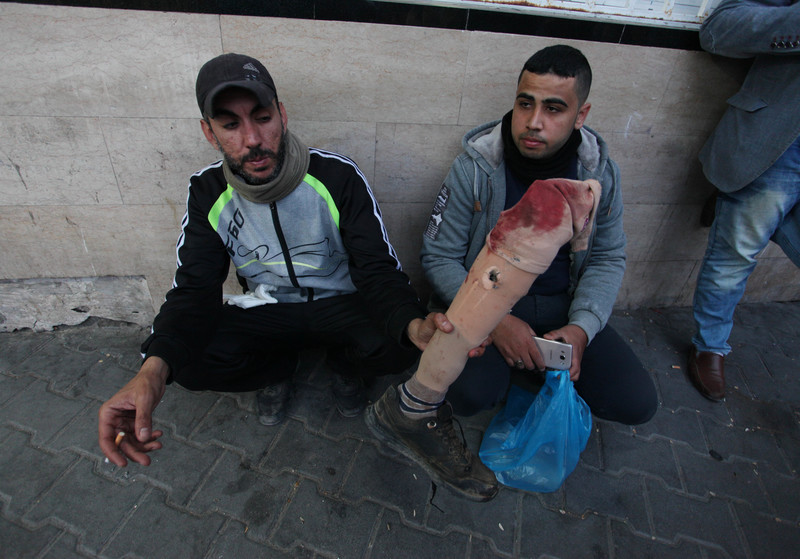 A Palestinian man carries Iyad al-Dawahidi’s prosthetic leg at Gaza City’s al-Shifa hospital after he was shot by Israeli forces during protests along the Israel-Gaza boundary, 6 April 2018. 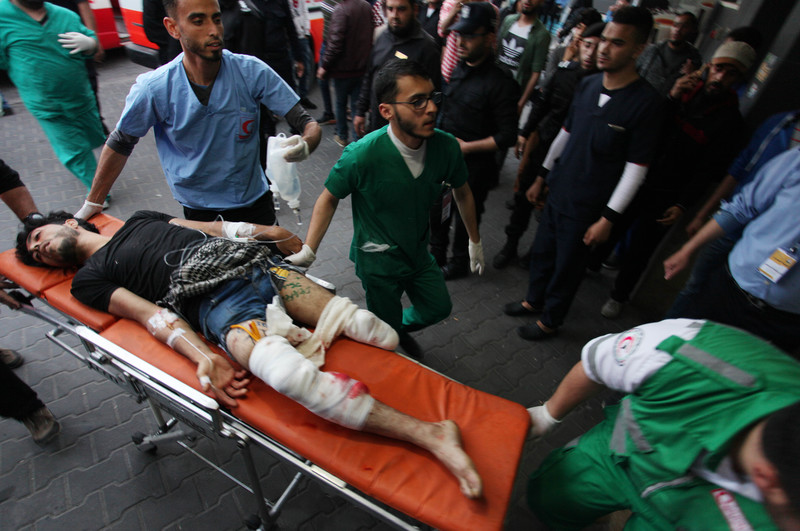 Iyad al-Dawahidi is taken to al-Shifa hospital for treatment after he was shot by Israeli occupation forces during protests at the Israel-Gaza boundary, 6 April.

On Friday Israeli officials once again openly admitted that they are wilfully targeting protesters, with military spokesperson Avichay Adraee stating that “Anyone who thinks he can hide from behind the lenses of our forces is wrong, we see you clearly”: 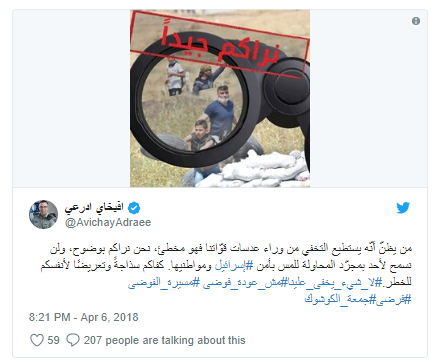 Embedded in Adraee’s tweet was an image that appeared to show Palestinian civilians, including a child, seen through binoculars or a scope.

The United Nations High Commissioner for Human Rights stated its “grave concern” for further violence ahead of Friday’s demonstrations.

The UN body stated that attempts by Palestinians to approach or cross the boundary fence “by itself certainly does not amount to a threat to life or serious injury that would justify the use of live ammunition.”

The UN stated: “In the context of a military occupation, as is the case in Gaza, the unjustified and unlawful recourse to firearms by law enforcement resulting in death may amount to a wilful killing, a grave breach of the Fourth Geneva Convention.”

As its use of deadly force against unarmed protesters has met with condemnation from Human Rights Watch and other groups, Israel has relied on the argument that it is defending its borders from “terrorists”: 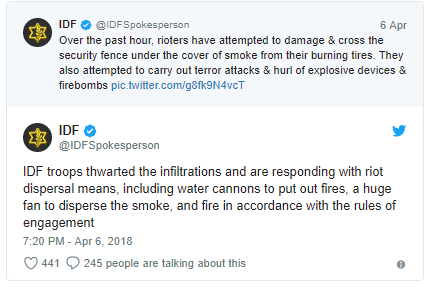 However, journalists, like Human Rights Watch, have pointed out that there have been no armed persons among the demonstrators:

Journalists have also pointed out that the Gaza-Israel boundary is not a border between two sovereign states, but an armistice line between an occupying power and the population living under its military rule:

It is hardly the first time that the Trump administration has demonstrated its callous disregard for Palestinian lives.

Eight Palestinians in Gaza were killed by Israeli forces in the month of December alone while protesting Trump’s recognition of Jerusalem as the capital of Israel.

The European Union also laid the blame on Palestinians, albeit more subtly than the US administration.

Having failed to condemn Israel’s premeditated slaughter last week, the EU put out a statement Thursday night urging Palestinians to “avoid any incitement to violence” and to “remain strictly nonviolent,” even though not a single Israeli has been reported injured as a result of the protests.

At the same time, the EU justified Israel’s use of force “when defending its legitimate security interests,” but urged that it commit violence against Palestinians with “proportionality.”

It remains to be seen if the EU, which brands itself as a champion of human rights, will consider this Friday’s death toll to be more “proportional” than last week. 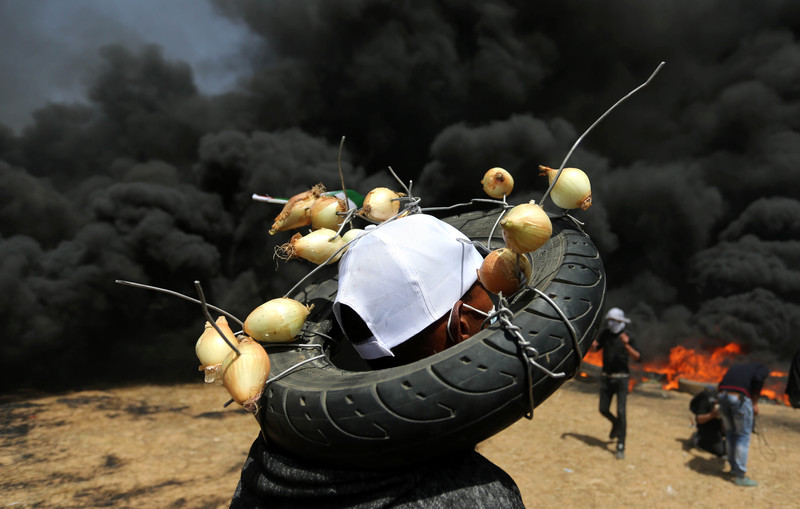 Fifty-one Palestinians have been killed by Israeli forces in the West Bank and Gaza so far this year, including Iyad Zabarka, a 30-year-old Palestinian citizen of Israel who was shot dead by soldiers in the West Bank while fleeing the scene after he reportedly crashed a stolen car during a chase with a private security company on Tuesday.

Five Israelis – three settlers and two soldiers – were killed by Palestinians in the West Bank during the same period.