This video shows two Israeli interrogators taunt and abuse Palestinian child prisoner Ahed Tamimiduring an interrogation at a police station in the Shaar Binyamin settlement in the occupied West Bank on 26 December.

During the interrogation, two Israeli officers shout at and threaten the 17-year-old, but she remains silent in the face of attempts to coerce a confession, including through sexual harassment and threats to arrest members of her family.

“You know Nour. You know Marwan. You know Osama. You know Marah. You know it all. We will take everyone if you don’t cooperate,” an interrogator says. “If you want to help them … it’s in your hands.”

Ahed’s lawyer, Gaby Lasky earlier this month filed a complaint with Israel’s attorney general over the sexual harassment of Ahed during the interrogation – though the office has done nothing about previous complaints.

The website Mondoweiss published a longer, 10-minute excerpt from the interrogation along with a transcript in English:

The interrogators appear to be showing Ahed a video on a laptop of her and her cousin Nour slapping and shoving two heavily armed Israeli soldiers on 15 December, after a soldier had shot and severely injured their 15-year-old cousin Muhammad Fadel Tamimi.

The interrogators at times lose their patience as Ahed remains impassive, refuses to answer their questions or make any confession.

Mondoweiss identifies one of the interrogators as an officer from Israel’s military intelligence agency Aman.

“When I think of my little sister, I see her here [in you],” he states. “She’s blonde as well. My little sister is blonde and her eyes are like yours, not like mine. Her looks… white! Like you.”

He also speculates about how Ahed would look when she goes to the beach and claims that Ahed’s mother had given him a message for her on how she should shower.

Ahed’s father Bassem Tamimi presented the video at a press conference in the West Bank city of Ramallah on Monday.

He said that the family was only able to obtain two hours of the interrogation footage, although some sessions lasted as long as 12 hours at a time during the first 10 days of Ahed’s detention.

“It hurts me to see her face these monsters and their abuse – but I am proud my daughter is strong and defiant,” Bassem wrote on Facebook on Monday, where he also posted excerpts of the video.

“This video is only a small glimpse of what she faced yet she is stronger than ever,” Bassem added.

At the press conference, Bassem said that the rounds of interrogation came after abuse including isolation, continuous transfers between prisons – a harsh form of physical abuse – and intimidation by soldiers, Mondoweiss reported.

Notably, the video shows Ahed being interrogated in isolation by two men, without the presence of a lawyer or guardian.

Ahed’s lawyer has noted that no women or interrogators specialized in dealing with minors were present either.

Human rights groups have documented serious, systematic abuses committed by Israel against the approximately 700 Palestinian children detained by its military each year.

An Israeli military court approved a plea deal in March that will see Ahed serve an eight-month prison sentence on top of a fine of nearly $1,500.

She was charged with assault and incitement after the video of the incident with the soldiers recorded by her mother Nariman circulated online.

Nariman and Ahed’s cousin Nour were also detained by the army and have also been sentenced to prison after accepting plea deals.

In the interrogation video, one of the Israeli officers threatens to “take every single one” of Ahed’s family members if she does not submit.

These were not idle threats and were in keeping with the signals coming from Israeli politicians.

Israeli leaders vowed revenge against the Tamimi family and enforced collective punishment on their entire village of Nabi Saleh because of their prominent role in the nonviolent resistance campaign to Israel’s theft of land for colonial settlements.

Israeli forces raided Nabi Saleh in February and arrested 10 members of the Tamimi family, six of them children.

The army declared the village a closed military zone to suppress demonstrations in support of those detained.

One of those arrested was Ahed’s cousin Muhammad Fadel Tamimi. Since the boy was shot, one third of his skull has been removed and he is awaiting major restorative surgery to put it back in.

Muhammad was also interrogated in isolation, without a lawyer or a guardian present, and coerced into a false confession that he fell off his bike instead of getting shot in the head with a rubber-coated bullet.

Towards the end of the video, the interrogator suggests that Ahed is forcing him to arrest other children through her silence.

There are currently 350 Palestinian children in Israeli military detention. 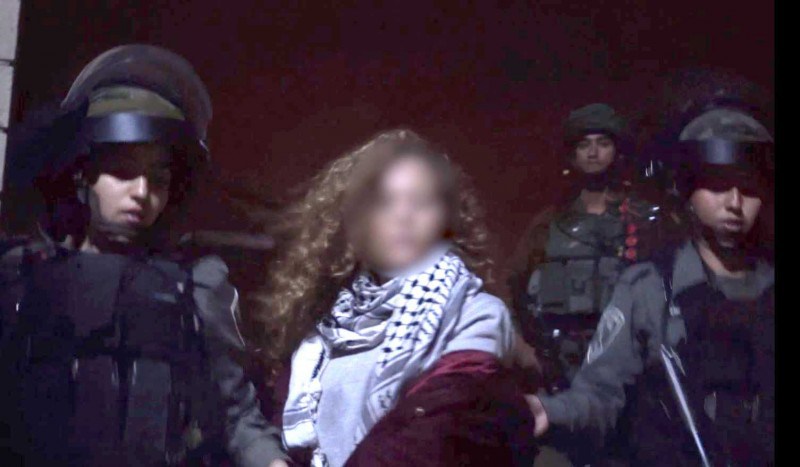