Palestinians Celebrate Release of Ahed Tamimi: 'I Won't Regret Something That is Not Wrong' 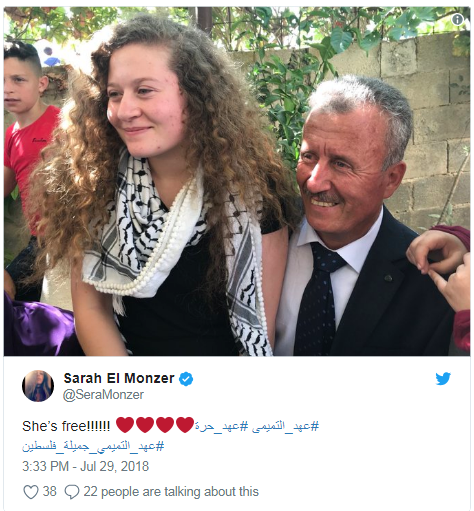 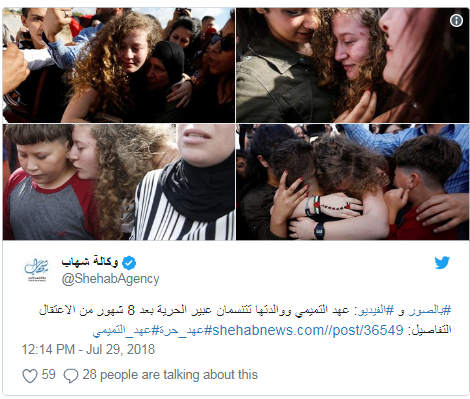 Ahed and her mother spent eight months in prison and paid fines totalling more than $3,000.

Ahed said she had no regrets for slapping an Israeli soldier, the action which brought down the revenge of Israel’s military against her and her family.

“I did nothing wrong that I should regret,” Ahed told Al Jazeera. “It was a natural reaction to the presence of a soldier in my home. The soldier came to my house, I didn’t go looking for him in order to hit him.”

“I won’t regret something that isn’t wrong,” Ahed added.

At a press conference following her release, Ahed said, “Prison taught me how to be patient, how to be in a group. It taught me to always love life, because when one is in prison everything feels more valuable.”

Ahed added that she faced many difficulties in prison.

“I am happy but my happiness is incomplete because my sister prisoners are not with me. I hope they will be freed quickly,” Ahed said.

She told the channel that she continued her studies in prison, including a course on international and humanitarian law. She added that she intends to study law because “nothing scares [the occupation] more than the truth.” 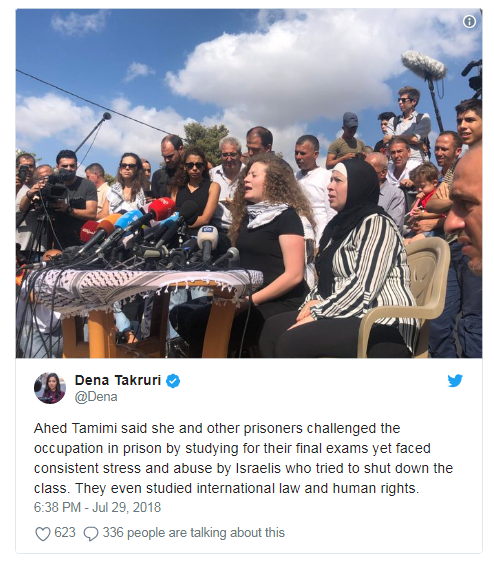 Turkish President Recep Tayyip Erdogan called Ahed to congratulate her on her release and to commend her on her “bravery and determination,” Turkish media reported.

Other politicians, artists and celebrities, including Lebanese Prime Minister Saad Hariri, expressed their congratulations to Ahed on Twitter: 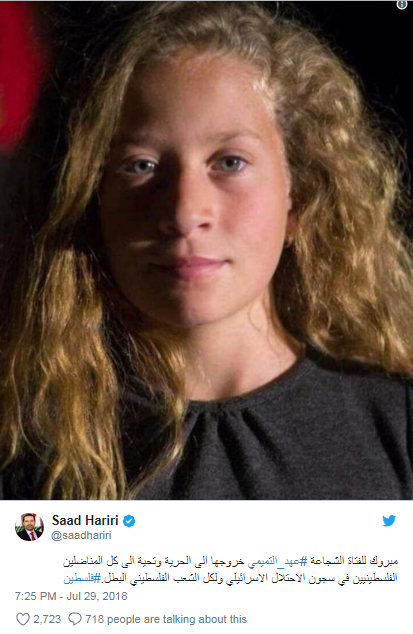 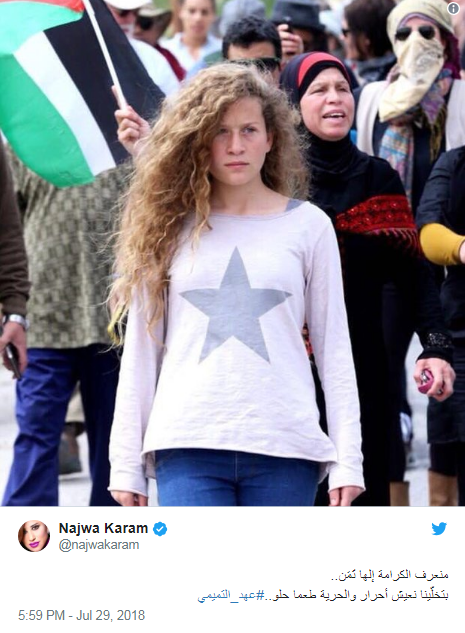 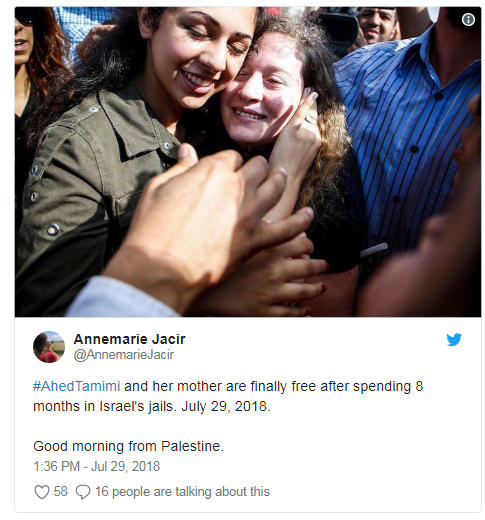 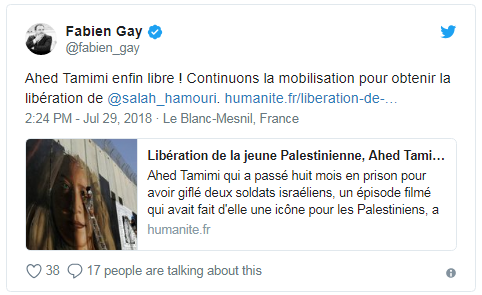 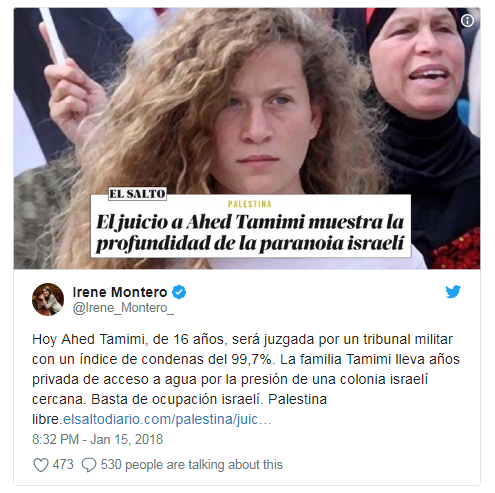 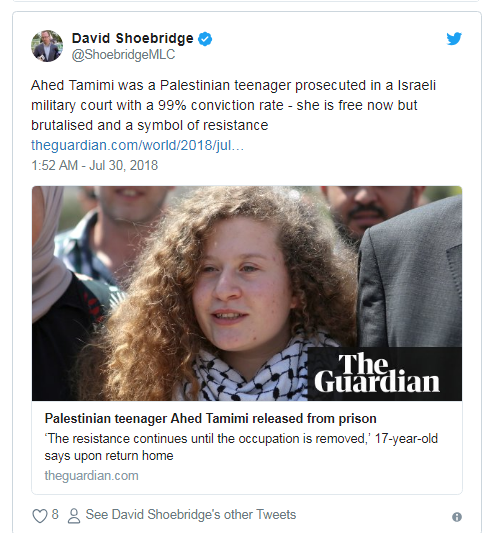 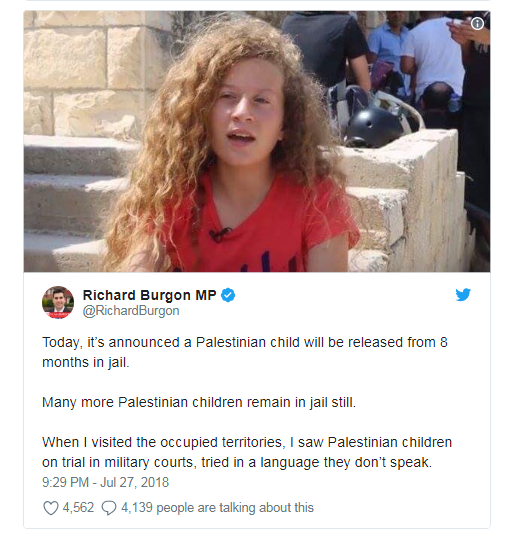 Mahmoud Abbas, leader of the Palestinian Authority in Ramallah, met with Ahed Tamimi on the day of her release.

Last week, defense lawyer Gaby Lasky announced that Ahed and her mother would be released on Sunday.

While family, friends and media waited for that moment early Sunday, Israeli authorities changed the release point several times, something many saw as a deliberately malicious act.

On Saturday, Israeli military forces detained two Italian artists and one Palestinian artist who painted a mural of Ahed on Israel’s West Bank separation wall in the days before her release. 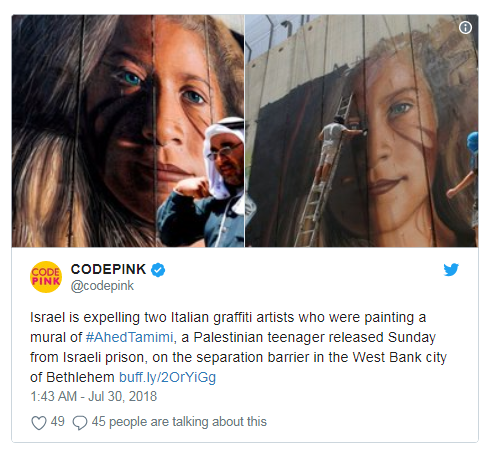 Israel released the artists on Sunday and ordered the two Italians to leave the country within 72 hours.

While Ahed is being celebrated as a symbol of Palestinian resistance in her community and abroad, many have noted that she is still a child – one of hundreds subjected to abuse and detention by Israeli occupation forces. 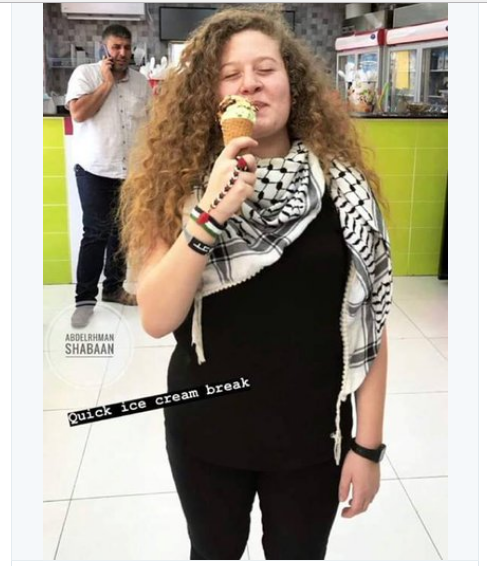 There are currently almost 300 Palestinian children in Israeli military detention, almost 50 under age 16.

Her case highlights the systematic abuses of Palestinian children that have prompted even US lawmakers to demand action.

Last week, Minnesota Democrat Betty McCollum spoke in the US House of Representatives to urge fellow lawmakers to co-sponsor the bill she introduced in November that would ban US military aid to Israel being used for the detention, abuse and torture of Palestinian children.

The legislation currently has the support of 29 lawmakers.

Ahed, who turned 17 while in prison, was charged with assaulting soldiers and incitement after a video recorded by her mother circulated showing Ahed and her cousin Nour slapping and shoving two heavily armed Israeli soldiers on 15 December.

Ahed was arrested in the middle of the night at her home in Nabi Saleh on 19 December.

Nour and Nariman were also detained by the army following the videotaped incident. Nour spent 16 days in prison and had to pay a fine of almost $600.

Muhammad was also detained by Israeli soldiers in February along with several other members of the Tamimi family, most of them children.

Muhammad was released after being forced to falsely confess that he was not shot in the head by Israeli soldiers, but that he fell off his bike.

In May, Israeli occupation soldiers detained Waed Tamimi, Ahed’s brother, from his home in Nabi Saleh.

Israeli soldiers beat and bruised Waed, 21 years old at the time, and he was hospitalized.

He remains in prison.

While Ahed and her family have been subjected to the iron fist of Israel’s military occupation and sham court system, no soldier has been held accountable for the shooting of Muhammad Tamimi, nor for the killings and injuries to residents of Nabi Saleh and other members of the Tamimi family.

Khater’s daughter, Bisan al-Fakhouri, posted pictures on social media of her mother embracing her younger brother before she was taken away: 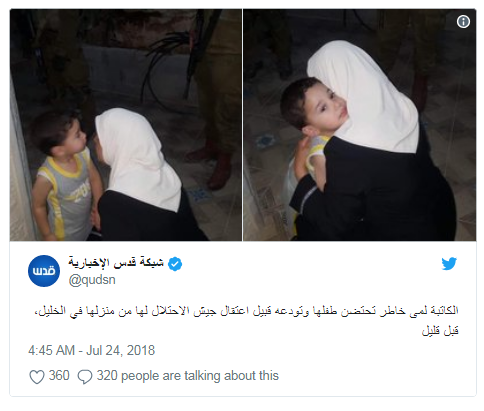 Israel is subjecting Khater to abuse during interrogations and sleep deprivation, her lawyer told the Ma’an News Agency.

Khater contributes to Al Jazeera, Quds News Network and Meem Magazine among others.

“We are concerned about the arrest of Lama Khater given Israel’s frequent use of legal measures, including administrative detention, to keep journalists in jail without bringing any charges against them,” Sherif Mansour of the Committee to Protect Journalists stated.

“Israeli authorities must explain immediately why they are holding her or let her go.”

Khater’s son was reportedly denied entry to a military court hearing and prevented from seeing his mother. 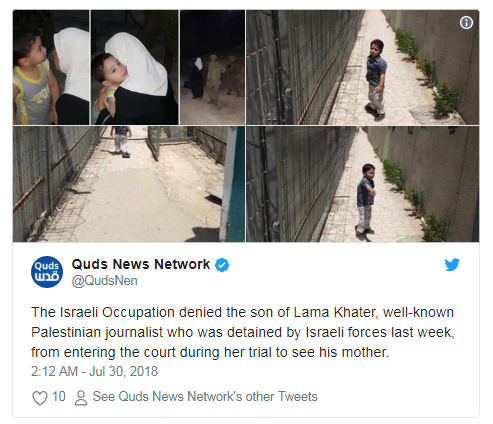