'Just Because You're Rich, Doesn't Mean You Get to Make People Suffer!'

ETP co-owns the Bayou Bridge Pipeline, which is currently under construction in southern Louisiana in the face of mounting opposition from the affected, led by the area’s indigenous peoples.

The BBP will transport crude oil from the Dakota Access Pipeline system, also built by ETP, to refineries in Louisiana. The protesters at Standing Rock two years ago, among whom were US military veterans, were met with police brutality but managed to briefly force a halt in the construction of that pipeline, pending an ‘environmental review’. However, an executive order passed by US President Donald Trump soon after he assumed office reversed the Obama administration’s decision, and the DAPL was completed in April 2017.

Both pipelines run under rivers for long stretches. The BBP will drill under the Bayou Lafourche river, which is a source of drinking water for over 300,000 people, according to a statement against the pipeline’s construction released by the Standing Rock Sioux tribe. It says that joint owners ETP and Sunoco Logistics Partner ‘have one of the worst spill records in the United States, being responsible for 317 pipeline incidents over the past 11 years’ that have caused over $64 million in property damage.

The BBP will also destroy about 150 acres of forested wetland and 940 acres of wetlands, the statement adds.

An explosion last week in a pipeline run by Enbridge Corp. in the Canadian province of British Columbia necessitated the evacuation of over a hundred members of the Lheidli T’enneh First Nation, according to reports. 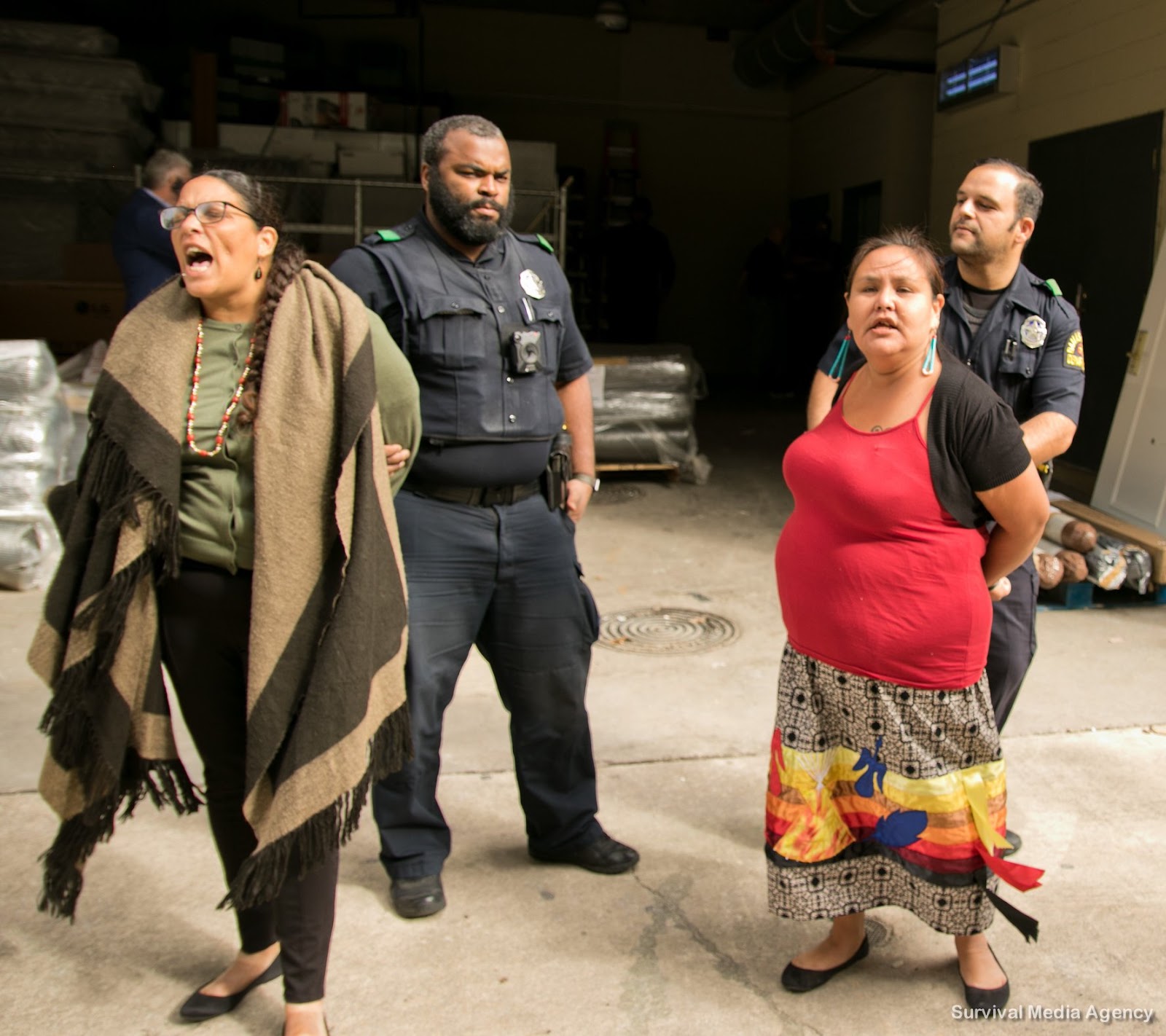 Foytlin and Locke were arrested after shutting down the ETP shareholders’ meeting in Dallas, Texas, but later released. They are water protectors, Locke from Standing Rock and Foytlin a member of the L’Eau est la Vie (Water is Life) resistance camp instituted to prevent the Bayou Bridge Pipeline’s construction in the Atchafalaya Basin, one of the largest wetlands in North America.

The camp is led by indigenous women. Members claim to have halted construction over 100 times so far. They have been forced to the ground and tased on several occasions by police. According to reports construction of the pipeline proceeds in spite of a court order last February requiring that an environmental assessment be completed first.

On Monday October 15, according to a L’Eau est la Vie press release, two boats carrying 15 water protectors and members of the media were intentionally sunk in St Martin Parish, Louisiana, by a patrolling ETP security boat that passed by them at ‘aggressive speed’, creating a large wake that capsized them.

Next day, Foytlin and Locke livestreamed their disruption of the meeting of ETP shareholders. In the video below, they can be seen telling fellow shareholders, ‘You people need to know about this. This is what you’re voting for. You are just as culpable as the company.’ CEO Kelcy Warren interjects, saying, ‘This isn’t the place for that.’ Foytlin responds, ‘This is exactly the place.’

As putative security personnel attempt to escort the pair of women out of the room, Locke tells shareholders, ‘They sank two of our boats yesterday. They’ve injured our children. They’re gonna act like they’re the innocent ones, but they’re not. You get to bother people and disrupt our lives, but we don’t.’

As she is forced out of the room, Locke cries out, ‘Just because you’re rich, doesn’t mean you get to make people suffer!’

As the meeting was shut down, over a hundred protesters marched into the hotel where it was being held. Banners protesting the pipeline and calling for CEO Kelcy Warren’s arrest were dropped from adjacent buildings. According to media reports Warren has recently come under scrutiny for saying indigenous protesters should be ‘removed from the gene pool’. 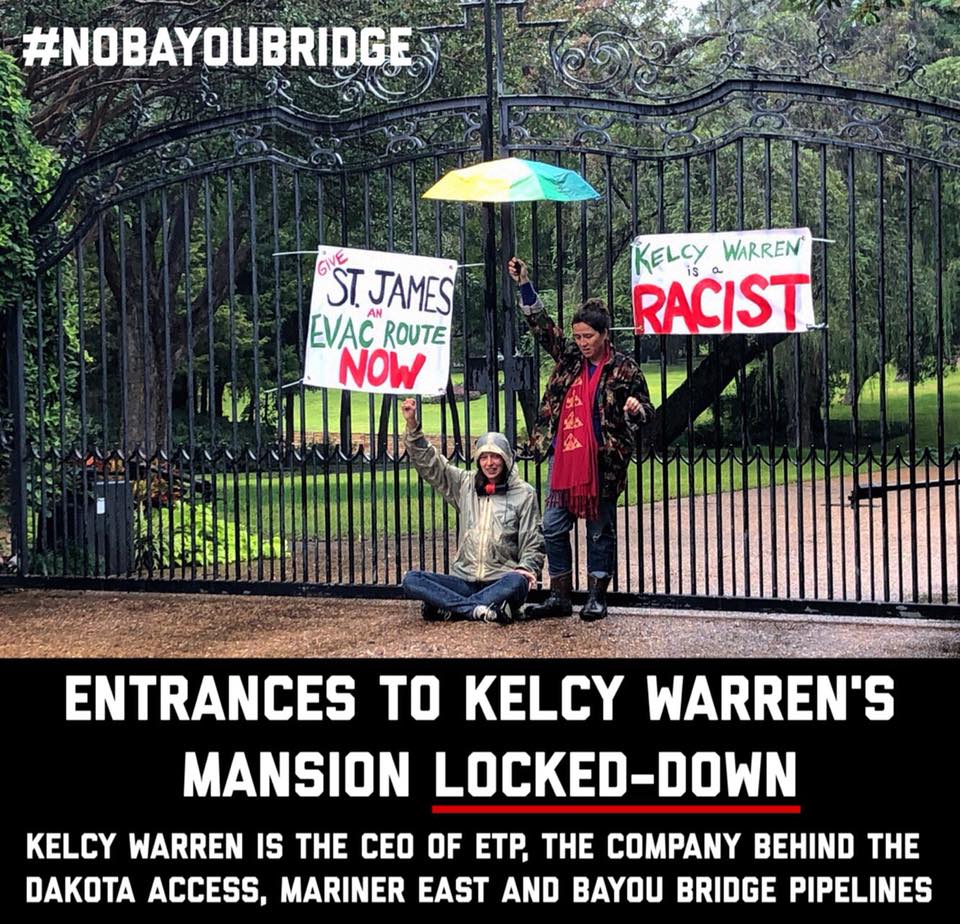 In statements to the public Foytlin said, ‘They’ve shackled grandmothers, used attack dogs on people, lied, stole, bribed, maimed, and poisoned, all over the lands. We won't never forget what ETP did at Standing Rock, nor what they have done to water protectors across the continent.’

When asked in the Dallas County Jail about any chronic medical conditions, Foytlin replied, ‘Colonisation.’

‘Thirty minutes later, I’m in to see the nurse,’ she relates. ‘“It says you have a chronic condition of colonization?,” she asks with a puzzled look. “Yea,” I say, “It’s when white people crawl up your ass and won’t go away.”’