NEW DELHI: As months of tensions between Israelis and Palestinian-Arabs in Jerusalem show no signs of abating, arsonists attacked a first-grade classroom at a Jewish-Arab school. The Hand-in-Hand bilingual school -- a rare symbol of coexistence in the city of Jerusalem -- was targeted by extremists, believed to belong to the Jewish right, on Sunday.

"Death to Arabs" and "There's no coexistence with cancer," were scrawled on the walls in Hebrew. Authorities reported that the assailants had piled up textbooks and set them on fire, badly damaging the schools first-grade classrooms.

"After I saw what was written, I realized it was not just a fire. They wrote 'Death to Arabs' and 'Kahana was right' — words which have a lot of meaning," the headmistress Nadia Knane told army radio. ‘Kahana was right’ refers to Meir Kahana, a virulently anti-Arab rabbi whose Kach party was banned but whose ideology still holds sway amongst Jewish extremists.

The attack drew widespread condemnation, with Israeli Prime Minister Benjamin Netanyahu vowing to act "forcefully" to return "the rule of law" across all parts of the city.

Israeli Justice Minister Tzipi Livni pledged to deal with such attacks with a “zero tolerance” policy. "I will work determinedly against everyone who acts against the law and expresses through violence the racist demon which has emerged in Israeli society — whether it is through hateful graffiti, arson or other forms of violence," the Justice Minister told reporters at the school.

Jerusalem's deputy mayor Rachel Azaria called the attack "a horrific crime perpetrated by people who want to destroy any place that creates real cooperation between Jews and Arabs". "We will not let them do this," Azaria added.

Israel’s Education Minister Shai Piron said it was a "violent and despicable incident" and "a serious affront to the fabric of Jewish-Arab relations".

Meanwhile, people gathered on Sunday in support of the school and its ideology, holding placards that read "Spread the light —together against terror,” "Light in a place of terrorism" and "We will continue together, without fear." 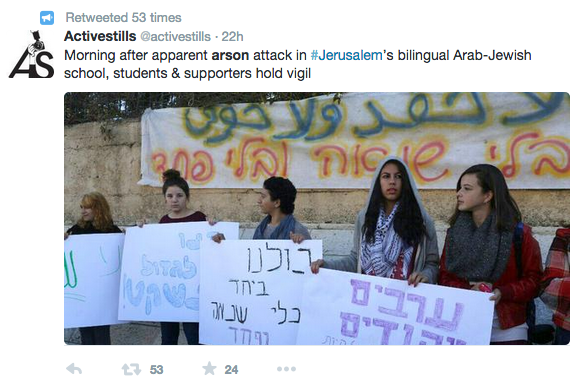 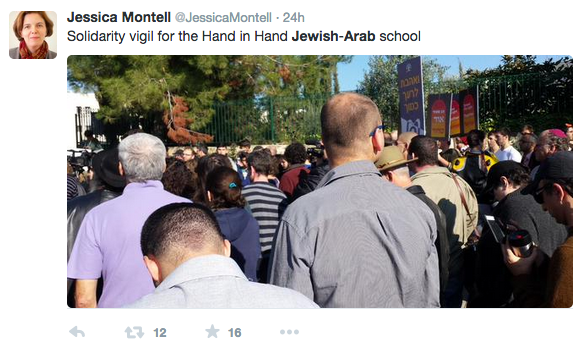 The school issued a statement that reads:

“Even if they manage to dirty the school’s walls, they will not manage to bring down our enterprise [of civil cooperation]. In addition… we invite the entire Israeli public to join us in the building of Jewish-Arab civil partnership in Israel.

We will continue to develop our educational and social project, where every day 1,200 students come to study, some 200 teachers come to teach, and in which thousands of family members are involved.”

Shuli Dichter, chief executive of the Hand-in Hand foundation told army radio, “In the past months, we've witnessed... a wave of racism [that] is dangerous, even physically dangerous," and added that it was time for the public atmosphere in the country to change.

The attack comes as tensions between Jews and Arabs soar over the the issue of access to the Al Aqsa Mosque, the city’s most contested holy site.

The incident also drew widespread condemnation across social media, with users taking to Twitter to call for coexistence and harmony.