'Terror Has No Religion': Attack on Two Mosques In New Zealand Kill 48

New Zealand declares shootings as an act of terrorism, citizens come out to embrace victims

NEW DELHI: 48 people have been killed, and at least 40 seriously injured, after shootings at two mosques in the city of Christchurch, New Zealand. The mosques targeted were Al Noor mosque, where 41 people died, and the Linwood Islamic Centre, where seven were killed.

A social media account believed to belong to one of the attackers featured an 87-page manifesto filled with anti-immigrant, anti-Muslim ideas. Brenton Tarrant, an Australian citizen, outlined his motivations prior to the attack on Twitter, including to “create an atmosphere of fear” and to “incite violence” against Muslims. The document was entitled ‘The Great Replacement.’ The attacker livestreamed one of the shootings, with New Zealand police urging people not to share the “distressing” footage.

New Zealand Prime Minister Jacinda Ardern described the attack as a “terrorist attack,” saying “Many directly affected by this shooting may be migrants to New Zealand, they may even be refugees here...They are us. The person who has perpetuated this violence against us is not.”

The twin attacks are the worst mass shootings in New Zealand’s history, with the political leadership quick to condemn the ideology behind the attack. “You may have chosen us but we utterly reject and condemn you,” Ardern said.

Condemnation has poured in, as has a outright rejection of “right wing extremism.” Australian Prime Minister Scott Morrison said, “New Zealand, like Australia, is home to people from all faiths, cultures and backgrounds. There is absolutely no place in either of our countries for the hatred and intolerance that has bred this extremist, terrorist violence and we condemn it.”

"This reaffirms what we have always maintained: That terrorism does not have a religion. Prayers go to the victims and their families," Pakistani Prime Minister Imran Khan tweeted. 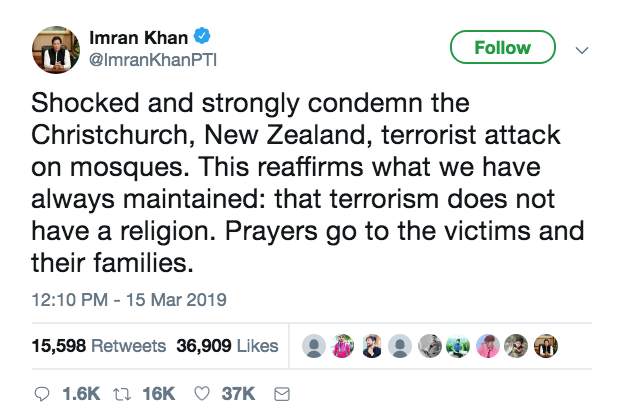 "Malaysia condemns in the strongest terms this senseless act of terror on innocent civilians and hopes that those responsible for this barbaric crime be brought to justice," a statement from Malaysia’s foreign ministry said.

"The government and the people of Indonesia convey deep condolences to the victims and their families," Indonesia’s Foreign Minister Retno Marsudi said in a statement. Six Indonesians had been inside the mosque when the attack occurred, with three managing to escape.

Turkish President Recep Tayyip Erdogan's spokesman condemned the "racist and fascist" attack. "This attack shows the point which hostility to Islam and enmity to Muslims has reached," Ibrahim Kalin wrote on Twitter. "We have seen many times Islamophobic discourse against Islam and Muslims turning into a perverse and murderous ideology. The world must raise its voice against such discourse and must say stop to Islamophobic fascist terrorism.”

London Mayor Sadiq Khan tweeted: “London stands with the people of Christchurch in the face of this horrific terror attack. London will always celebrate the diversity that some seek to destroy.” 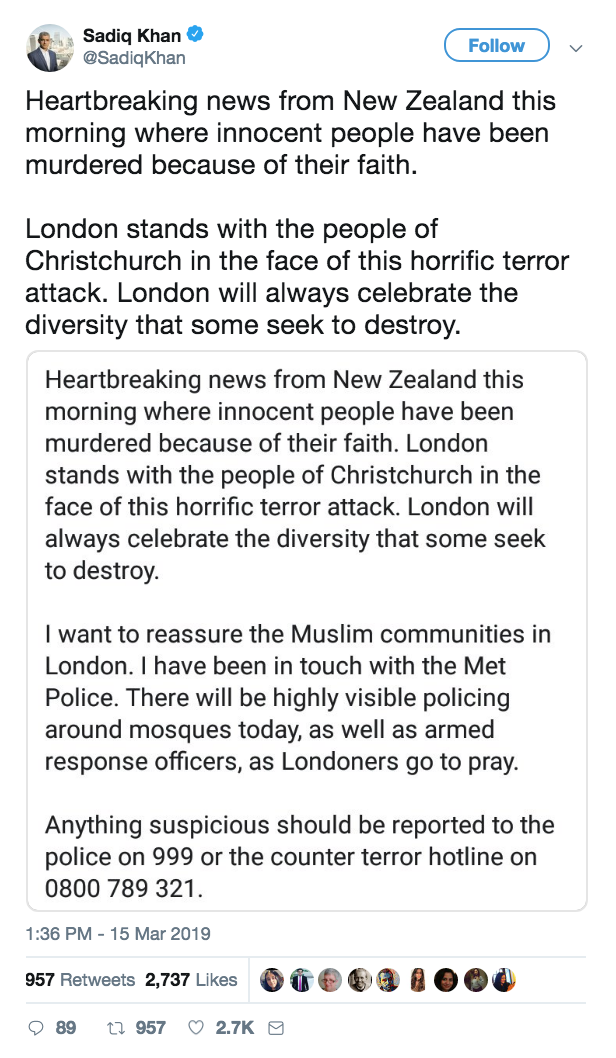 There is an outpour of condemnation on social media. All Blacks rugby star Sonny Bill Williams posted a tearful tribute. “I heard the news. I couldn’t put it into words how I’m feeling right now,” Williams said while in his car. “Just sending my duas [prayers] to the families,” he said.