Thanks To Ardern, New Zealand Today Soothes The Soul

Do an opinion poll anywhere: she is the compassionate leader the world is looking for.

Those who have rushed to psychoanalyze 28 year old Australian, Brenton Tarrant, for the outrage in Christchurch, New Zealand, mosques killing 50 people, are concealing the reality, possibly without their knowing it. This line of inquiry will not explain why Christchurch or Pulwama, Utrecht and now Birmingham happened.

When Phoolan Devi, the low caste “mallah” (boatwoman) shot dead 22 high caste Rajputs in the village of Behmai, 80 kms from Kanpur in UP on February 4, 1981, she had taken the law into her own hands. This she had done because no law enforcement agency had come to her rescue when the very same men had locked her in a room and taken turns, repeatedly, to rape her over weeks. It was gross injustice she was fighting.

During the British mandate over Palestine, Jews formed Haganah a secret, militant organization – guns, hand grenades et al – to protect Jewish enclaves against “Arab gangs”. Why was Haganah formed? Perceived injustice. In 1939 the British produced a White Paper restricting Jewish immigration. That is when the French built ocean liner, Patria, carrying nearly 2000 Jews to Mauritius was sunk off Haifa killing 267 people. Later, the same group – its offshoot Irgun – bombed the King David hotel in Jerusalem, killing 28 British soldiers. Both were ghoulish acts. But would Menachem Begin, Member of Haganah later Prime Minister have seen it this way? According to their lights, Begin and, indeed, the entire Haganah outfit were fighting British injustice.

April 13 will be the centenary of the Jallianwala Bagh massacre in Amritsar. Colonel Reginald Dyer’s character or a psycho analysis will not shed light on whether or not police action was required on a scale which killed 1,000 people. The official British figure was 379 dead. Lt. Governor of Punjab, Gen. Michael O’Dwyer justified military action on administrative grounds. This is not the way Udham Singh the nationalist saw the massacre. He turned up in the UK and shot dead Gen. O’Dwyer in March 13, 1940 at the Caxton hall, now Royal Society for Royal Affairs. It was injustice he was fighting.

In his trial Udham Singh said: “He wanted to crush the spirit of my people, so I crushed him. For full 21 years I have been trying to wreak vengeance. I am happy that I have done the job.” There are series of such incidents which the state would have considered acts of terror. The perpetrators have been celebrated as martyrs and patriot including the great Bhagat Singh. They were fighting an unequal battle against injustice.

During a visit to Libya, Hillary Clinton as Secretary of State appeared on global TV making a V sign and blurting out the unforgettable line, “I came, I saw and he died.” Even as she spoke this masterpiece of callousness, appeared on the screen images of Gaddafi screaming, being sodomized by a knife. Would this not have made the Libyan blood boil with sheer helplessness?

And not just Libya. Imagine the relentless destruction of Afghanistan, Iraq, Syria, all the 9/11 wars. Millions are killed. Begins the migrant trek to Europe which all but shuts its doors, forgetting that just the other day it was complicit in destroying their homes, their cities and villages.

The samples I have touched upon are of people experiencing injustice, suffocated and, presumably, waiting for their time. But the perpetrator of the Christchurch outrage is in a different category. He experienced no injustice. His phobia, like that of his fellow murderer from Norway, Anders Breivik, derives from the contemporary curse called the global media. They have been fed on the post Soviet Union, post 9/11 wars mentioned above. But they have seen these stories covered by a media which has mysteriously cast victims as villains. Jean Raspail’s novel “Camp of the Saints” shows destruction of Western civilization through third world immigration. This becomes Tarrant’s nightmare.

I was witness to the launch of the global media in Baghdad on January-February 1991. The Operation Desert Storm was covered live by Peter Arnett of the CNN. Not to comprehend the significance of this event is to miss out on the nature of International Affairs in the post-Soviet period. Remember, the Berlin wall fell in 1989; Soviet Union came down like melting ice cream in 1991. This was the first time in human history that coverage of a war was brought live into our drawing rooms.

The coverage divided the world into two hostile camps – the triumphant West and the defeated, demoralized Muslim nations. This critical division got amplified exponentially as the two Intifadas erupted, followed by the four yearlong Bosnia war bringing, once again the brutalities heaped upon Bosnian Muslims, day after day. The climax came with the 9/11 wars and the unbelievable fireworks over Afghanistan.

With each war and accompanying global coverage the West-Muslim divide widened. It was this atmosphere so thoroughly saturated with Islamophobia which shaped the minds of Breivik and Brenton Tarrant. Leaders like George W. Bush, Tony Blair and Australia’s John Howard cynically used this “othering” of the world’s Muslims as a strategy for western cohesion. Fear of terrorism, real or simulated, resulted in loss of status of foreign offices. Intelligence agencies acquired saliency.

In India, the sheer hypocrisy of the elite shrouded and thereby aggravated a corresponding division between non Muslims and Muslims stoked by our anchors. The new liberal economic policies of the 90s demanded a multiplication of TV channels. This coincided with accelerated communalization after the fall of the Babari Masjid in 1992.

Capitalism and communalism joined hands and set the national agenda conducive to the consolidation of Hindu nationalism. In the ranks of these nationalist it would not be impossible to find willingness to give a sympathetic quarter to Brenton Tarrant. But to Prime Minister Jacinda Ardern goes the credit for having taken the fierce current head on.

Do an opinion poll anywhere: she is the compassionate leader the world is looking for.

Donald Trump minimized the outrage and all but approved of Tarrant.

Thanks to Ardern, New Zealand today feels like a land for pilgrimage to sooth the soul. 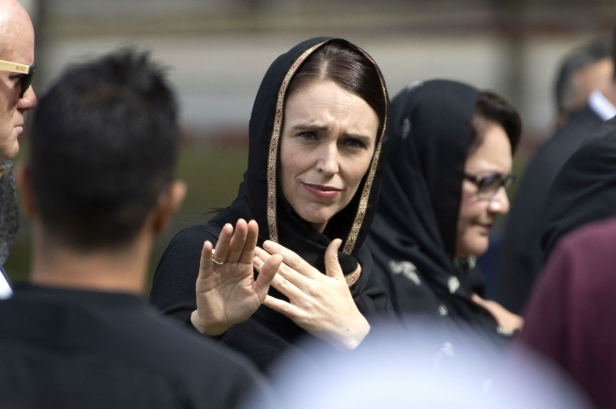