NEW DELHI: The United States’ Senate Intelligence Committee released on Tuesday a condensed 525-page summary of what was originally a 6000 page review that assessed the CIA's use of "enhanced interrogation techniques" in the post-9/11 era. The report concluded that the CIA’s harsh interrogation techniques did not work, were more brutal that previously revealed, delivered no information that prevented an attack, and were “deeply flawed,” often resulting in “fabricated” information.

The report outlines incidents such as a prisoner freezing to death after being left to sleep without pants on a cold, concrete floor; a prisoner was forced to stand in a “stress position” on broken bones; the wife of a prisoner was threatened with sexual assault by the CIA interrogators; amongst other brutal techniques.

The findings are clear. Sen. Dianne Feinstein writes in the report that the Committee’s finding reveal that "CIA detainees were tortured." "I also believe that the conditions of confinement and the use of authorized and unauthorized interrogation and conditioning techniques were cruel, inhuman, and degrading. I believe the evidence of this is overwhelming and incontrovertible," she writes.

The important takeaway is that the report notes that these techniques -- considered equivalent to torture -- were not necessary to “save lives” or deliver information that was not being solicited by other means. The CIA has thus far maintained that “enhanced interrogation techniques” are needed for exactly the above purposes.

In fact, the report goes a step further and says that false confessions obtained by brutal techniques led to dead leads. In short, the enhanced interrogation techniques adopted by the CIA either led to false information or to information that had already been obtained through alternative techniques.

A glimpse into the brutality of the techniques is evident through a few examples in the report.

Techniques used by the CIA "involved keeping detainees awake for up to 180 hours, usually standing or in stress positions, at times with their hands shackled above their heads." Other techniques included "rectal rehydration," "ice water 'baths,'" and threatening detainees with threats to harm detainees' families, including threats to "sexually abuse the mother of a detainee," according to the summary of the report.

The report notes that at times, detainees were kept in pitch-black freezing rooms "with loud noise or music and only a bucket to use for human waste." One such detainee "who had been held partially nude and chained to a concrete floor" died in Nov. 2002 from suspected hypothermia.

At least five prisoners were subject to "rectal rehydration" or "rectal feeding."

The waterboarding technique led to a prisoner nearly drowning.

A prisoner was tortured for months based on the false accusations of another prisoner. 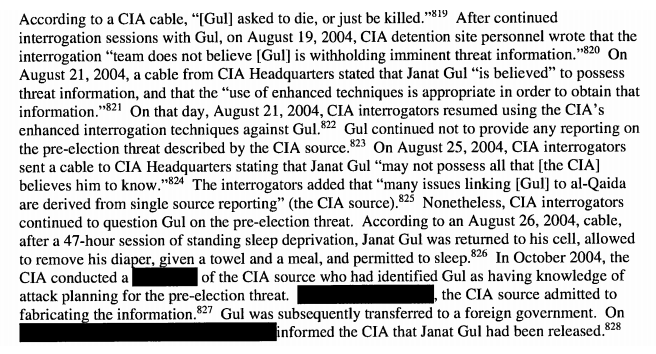 The techniques had deep psychological and physical consequences.

One prisoner, as a result of sleep deprivation, began hallucinating "dogs mauling and killing his sons."

The damning report notes that the CIA misled the White House, Congress, and other agencies. President George W Bush was not briefed on "the specific CIA enhanced interrogation techniques before April 2006," by which time, 38 of the 39 detainees on whom the techniques were used had already been in custody and interrogated. The CIA’s lack of records means that the number of detainees who faced these interrogation procedures could have been more.

Further, the report alleges that the CIA "provided extensive amounts of inaccurate and incomplete information" to the White House and security agencies. It states that the CIA wrongly stated that the “enhanced interrogation techniques were uniquely effective and necessary to produce otherwise unavailable intelligence that the U.S. government could not obtain from other sources.”