“Being Stranded Abroad is a Nightmare,” say Indian Students in the US

NEW DELHI: ‘’I came to Coralville, Iowa for my internship. I have been unemployed since the mid of March and since then I am struggling to pay my rent, my phone bills, my electricity bills and even buying groceries for daily needs is a tough task for me,” Abhiraj Panicker told The Citizen.

When universities and firms abruptly shut down in March because of the coronavirus pandemic, students who could afford to take the last-minute flight returned to their parents’ homes. However, many who had been living in college dorms were left to try to find new housing, far from home in a country under lockdown.

"If Air India can fly and charge exorbitant prices in the name of helping stranded Indians, then why doesn't India let private airlines fly? This is not a help, instead, it's robbing people, charging round trip fare for one way and still not letting the deserving people go," an Indian student, who lost a family member to COVID-19 and desperately wanted to return, told news agency PTI.

As their bank accounts dwindle, some students say they have had to turn to strangers for help. Others are couch surfing in the family homes of their friends or living in open garages.

“Shutting down of universities left a lot of people without jobs. For me, I got less shifts at work which led to not being able to pay rent and asking my parents for money. The Indian government did mention that students would get to go home on evacuation flights but I never really got contacted by the embassy for the same,” Sharma said.

Students who do not have jobs and have not been able to return home are struggling to pay rent and buy food supplies. Many students reportedly scheduled their flights to their hometowns in March, but the plan backfired when India closed its international borders in the wake of the pandemic.

A nationwide lockdown was announced by the Government of India on March 24 which resulted in a temporary ban on domestic and international air travel.

“I have my money invested in Delta Airlines. I cannot afford to invest another $1456 in Air India airlines on a one-way ticket and this happens to be the case for a lot of people,” Sharma stated.

A large number of Indian students are also witnessing their financial stability falling apart. While some come from families privileged enough to pay for their housing, many others had already been struggling to cobble together their rent and food.

“Being stranded abroad during a pandemic is a nightmare, especially when you are a student. Students often face a lot of emotional and economic vulnerability,” Simreen Kaur, an undergraduate at the University of Nebraska Lincoln, told The Citizen.

“During the time of a pandemic, the situation worsens so much that it tips many of us at the verge of depression, anxiety etc. Being away from your family, managing everything yourself, being worried about your visa status and even the health of your family back home all together combined with online classes is too difficult to handle,” Kaur said.

“The Indian embassy has been of little to no help at all. First of all, there has been no transparency in the Vande Bharat mission. How are we supposed to know of our possibility of getting the flight when we don't know how many people have applied and what criterion is taken into consideration while selecting passengers?” she asked, adding that despite repeated calls to the embassy, officials at the other end of the line were “least interested in listening to your problems” and in a hurry to cut the call.

“Just after one question, they interrupt and say "Okay ma’am? Okay thank you!", almost about to cut the phone. All other services were stopped and no economic help was given to the students who had lost their jobs and didn't have money for their daily expenditure. Really very disappointing,” Kaur stated.

A lot of students lost their on-campus or part-time jobs that helped pay their expenses and had to turn to food banks for help.

“I came to my aunt’s place in Baltimore from New York where I’m currently studying. That was supposedly for a week but now I’ve been here for three months,” said Jaskirat Panjrath, a graphic design student at Parsons School of Design, New York.

“The uncertainty came in many levels and it really bothered me. There is a lot of financial distress as well because of our on-campus jobs being laid off. For international students, our fee is very high, the amount of money we pay for the experience was not justified,” Panjrath said.

Arya Kodare, a sophomore at University of Toledo recalled, “My university declared a lockdown during our spring break and even then, we were not given any proper information whether the entire semester will be online or not. By the time we received confirmation by the university, India had started the lockdown.”

“We were fired from our jobs and we were told to move out of our housing immediately,” Kodare said. 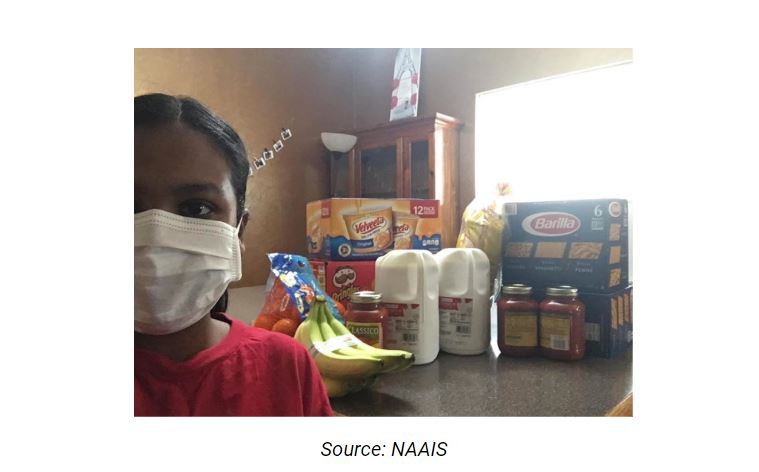 Sudhanshu Kaushik, Executive Director of the North American Association of Indian Students (NAAIS) told The Citizen, “One thing we need to stop doing is generalizing, we think every student who studies in the United States comes from well-off or privileged families. That's the generalization to a lot of people and that's not the case.”

“We're only thinking about privileged Indian students studying abroad. Think about the ones who took loans, sold their lands, or are on scholarships here because they got this chance to do so. The ones who were well off enough have already left or the ones who decided to stay knew they could manage. The plight of migrant workers is far greater for sure but that doesn't mean that empathy should be limited,” he said.

Kaushik added that the cost of living in the USA is already very high and made more difficult when the only source of income for many students has been taken away.

“We're helping students with immediate food relief, housing, legal aid and health knowledge; people aren't aware in terms of what their legal rights are. Landlords and other people are misusing them. As of now, it has been three months of rent. People are trying to find some kind of jobs, aid, or if they can get more money from loans. These are people from a variety of backgrounds, the lack of income and money has affected them,” he explained.

‘’The Indian embassy is trying but they are severely limited with the resources they have. And there's been a lot of lack of communication [and] genuine outreach too. Even though the diplomats on the ground are trying their very best. They are trying to get out there and be able to access the situation but again it's all about resources…,” Kaushik said, adding that many of the people he knows have not been able to meet or speak with anyone at the embassy.