During the month of June, Israeli occupation forces shot and killed a Palestinian motorist at a Jerusalem-area checkpoint in the West Bank in an apparent extrajudicial execution.

Ahmad Mustafa Erakat, 26, was driving a rental car on his way to pick up his mother and sisters from a beauty salon ahead of a family wedding when he was shot by Israeli Border Police at the Container checkpoint near the village of Abu Dis on 23 June.

Israel claimed that Erakat had intentionally rammed soldiers with his car.

Video of the incident shows the vehicle swerving toward the checkpoint, knocking a soldier to the ground and reportedly causing light injuries. The driver exits the vehicle and within seconds, he is shot while running backwards from the soldiers.

The footage indicates that Erakat posed no immediate threat and Israeli forces did not attempt non-lethal means of detaining him before shooting to kill.

Erakat’s family said he was “killed in cold blood.”

Israel is holding Erakat’s body, along with the remains of more than 60 other Palestinians recently killed by its occupation forces.

Last year, Israel’s high court approved withholding the bodies of slain Palestinians so they may be leveraged in political negotiations.

Erakat is the fourth Palestinian killed so far this year in what Israel claimed were car-ramming attacks.

Human rights groups have long accused Israel of a shoot-to-kill policy. Investigations by those organizations frequently reveal Israel’s claims of attacks to be flat-out lies.

Also during June, Rami Saad al-Ghalban, 43, died from injuries sustained during Great March of Return protests along Gaza’s boundary with Israel in August 2018.

An independent UN commission of inquiry found that Israel’s use of lethal force against protesters warrants criminal investigation and prosecution and may amount to war crimes and crimes against humanity.

Two dozen Palestinians have died by Israeli fire so far this year. One Israeli, a soldier, was killed in the context of the occupation during the same period.

Meanwhile in June, two infants in Gaza died after being denied access to medical treatment as Israel’s siege on the territory entered its 13th year.

“Israel’s permit system, an integral part of the illegal closure of Gaza, is an arbitrary and unnecessary measure that unlawfully preconditions urgent and lifesaving care for thousands of Palestinians,” human rights groups stated.

The babies died after the Palestinian Authority curtailed its dealings with Israel, including coordinating permits, in protest over the latter’s plans to formalize its annexation of occupied West Bank land.

Human rights groups called on Israel’s defense ministry to allow travel from Gaza “irrespective of coordination with the Palestinian Authority.”

The number of confirmed coronavirus cases in the West Bank and Gaza Strip spiked in the second half of June.

The total number of COVID-19 cases quadrupled from nearly 700 on 16 June to more than 2,700 as of 30 June, “one of the highest rates of increase reported worldwide during this period,” according to the UN monitoring group OCHA.

“Six people died, bringing to 11 the cumulative number of fatalities” in the Palestinian territories, OCHA added.

All new cases were recorded in the West Bank, with Hebron, its most populous city, the epicenter of the recent outbreak.

OCHA attributed the surge “to the relaxation of restrictions and lack of compliance with public health regulations on the part of the population in previous weeks.”

The Palestinian Authority announced a five-day full lockdown on the West Bank beginning 3 July to curtail the spread of the virus.

Coronavirus cases were on the rise in Israel as well, with its health minister stating that the country is “at the start of a second wave.”

There have been more than 26,000 confirmed cases of the coronavirus in Israel, more than 300 of them fatal.

The global number of coronavirus deaths passed the 500,000 threshold in late June, a quarter of those fatalities occurring in the United States. Staff from Gaza’s health ministry pray during the funeral of Rami al-Ghalban, who succumbed to wounds sustained during protests along the boundary with Israel in 2018, Khan Younis, southern Gaza Strip, 2 June. (Ashraf Amra / APA images) A Palestinian preschool teacher plays with a child at a kindergarten newly opened following a nearly three-month closure as part of measures to prevent the spread of COVID-19, Gaza City, 2 June. (Mahmoud Ajjour / APA images) Israeli forces demolish Palestinian-owned shelters south of Yatta village near the West Bank city of Hebron on 3 June. The structures were ordered demolished on the pretext that they were built without a permit, which are all but impossible for Palestinians to obtain in the some 60 percent of the West Bank under full military rule. (Mosab Shawer / APA images) Palestinian children fly kites to mark Naksa Day in Gaza City on 4 June. The annual commemoration marks the anniversary of Israel’s occupation of the West Bank and Gaza Strip in 1967. (Mohammed Zaanoun / ActiveStills) A protester holds a sign depicting George Floyd, a Black American killed by a police officer, and Iyad Hallaq, a Palestinian man with autistic traits killed by Israeli police, during a demonstration against Netanyahu’s plan to annex parts of the West Bank, held in Rabin square, Tel Aviv, 6 June. (Keren ManorActive / Stills) A mural on Israel’s annexation wall in the West Bank city of Bethlehem depicts George Floyd, a Black American who was killed by a police officer, 9 June. (Abedalrahman Hassan / APA images) 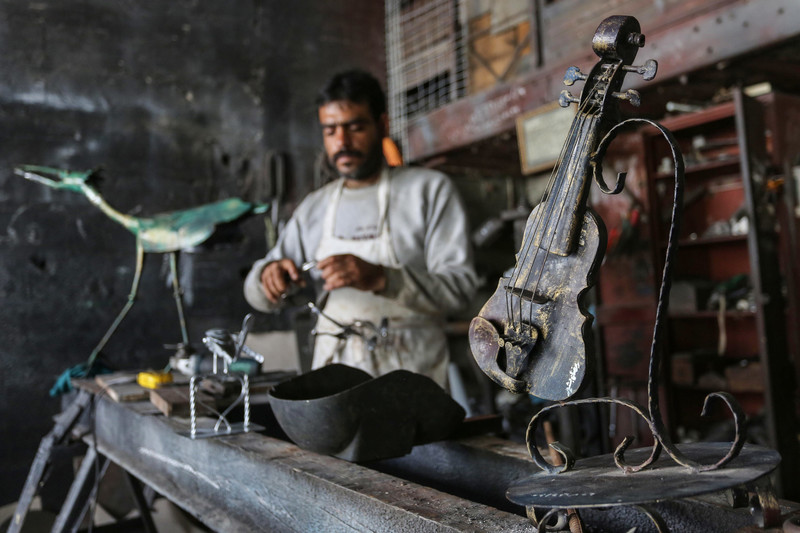 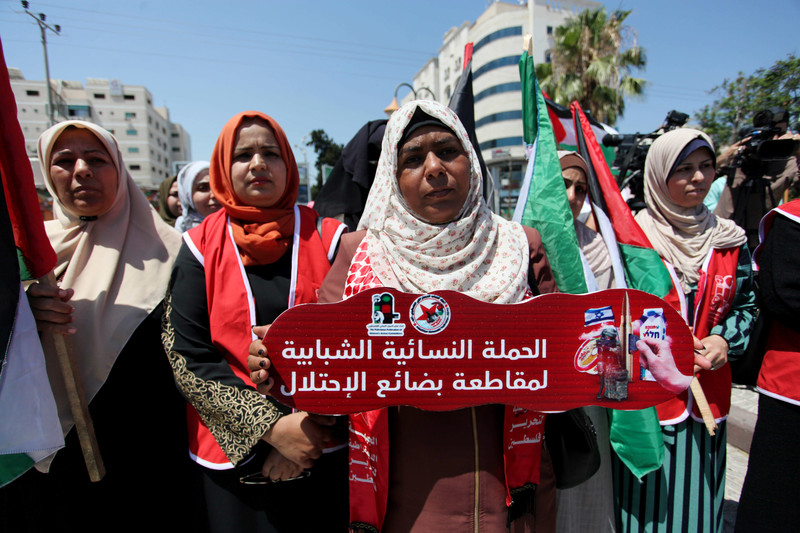 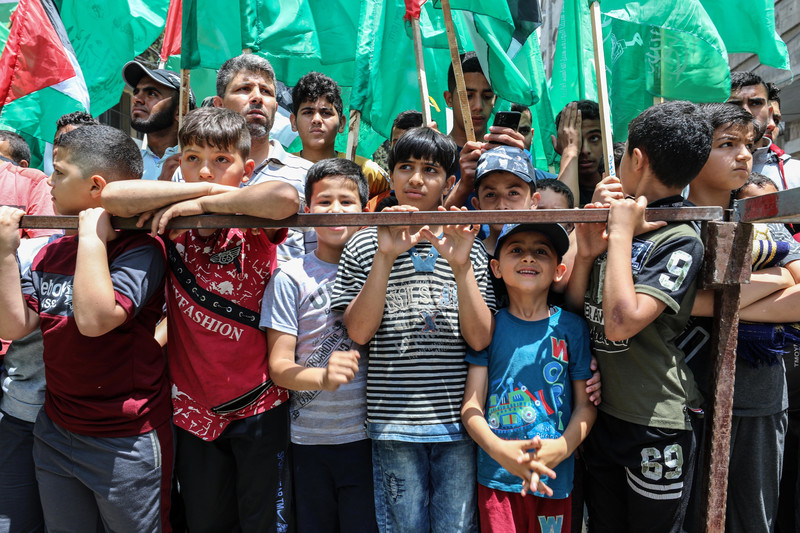 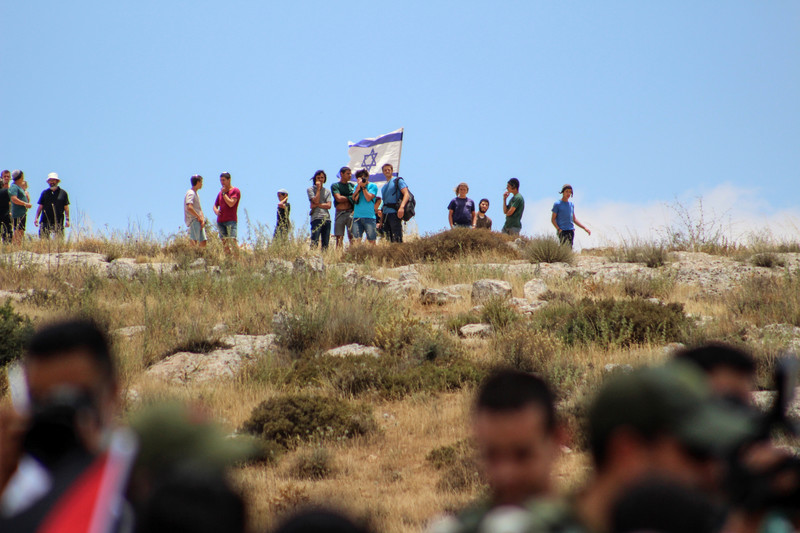 Israeli settlers watch from a hilltop as Palestinians argue with occupation forces during a protest against annexation in the village of Susiya, south of the West Bank city of Hebron, on 19 June.(Mosab Shawer / APA images) 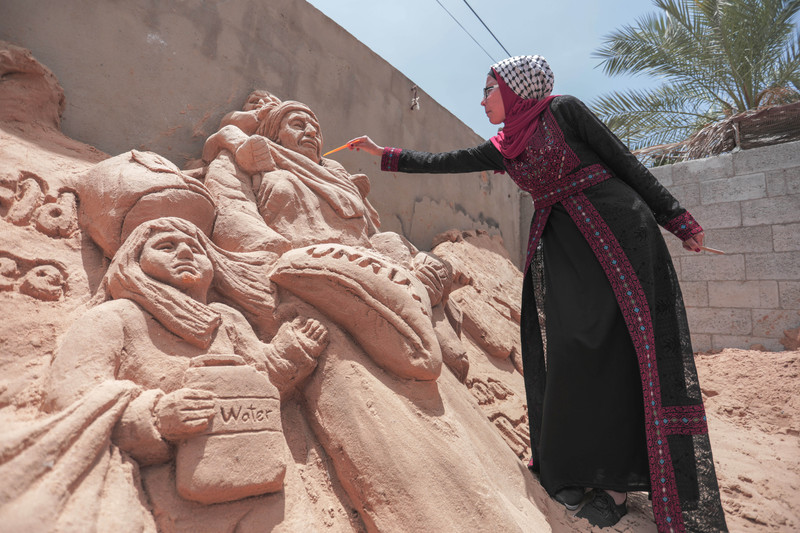 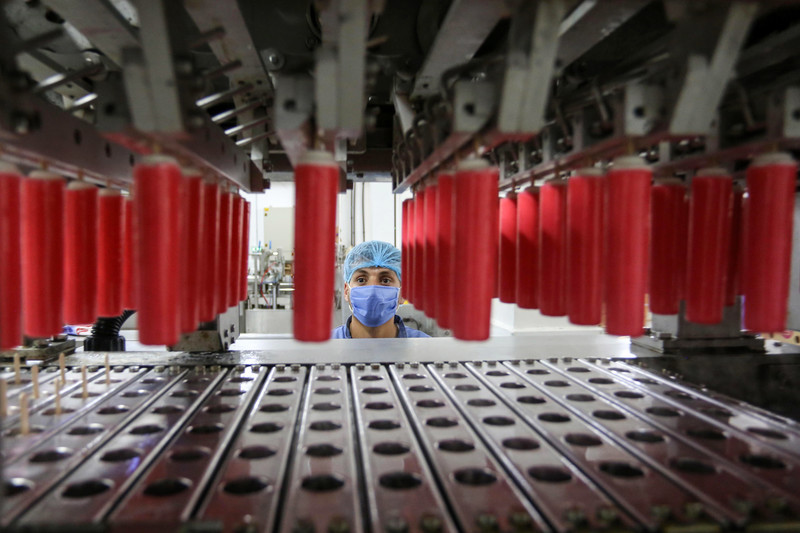 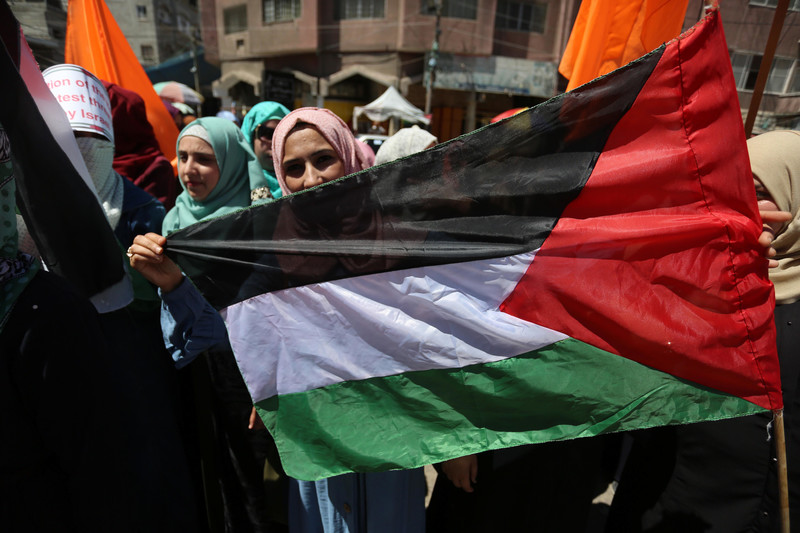 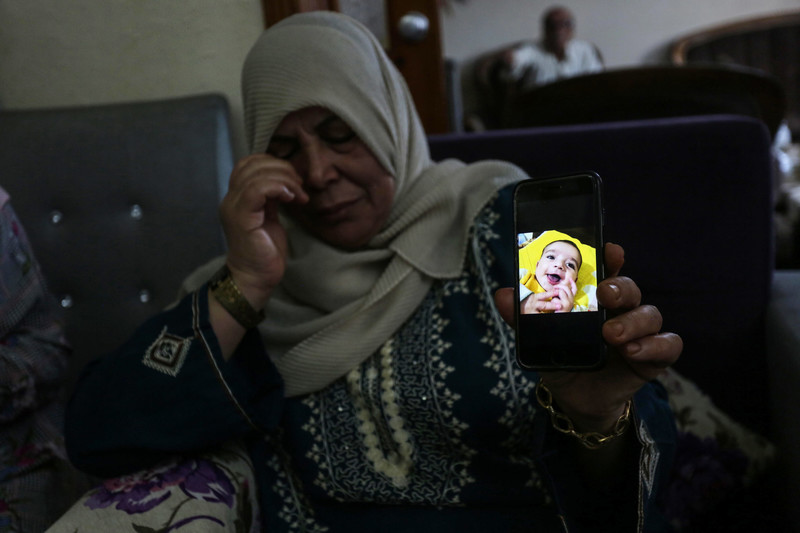 The grandmother of Omar Yaghi displays a photo of the infant on 23 June, several days after the 9-month-old died from heart failure while his family waited for an Israeli permit for travel outside Gaza for life-saving medical treatment for the child. (Ashraf Amra / APA images) 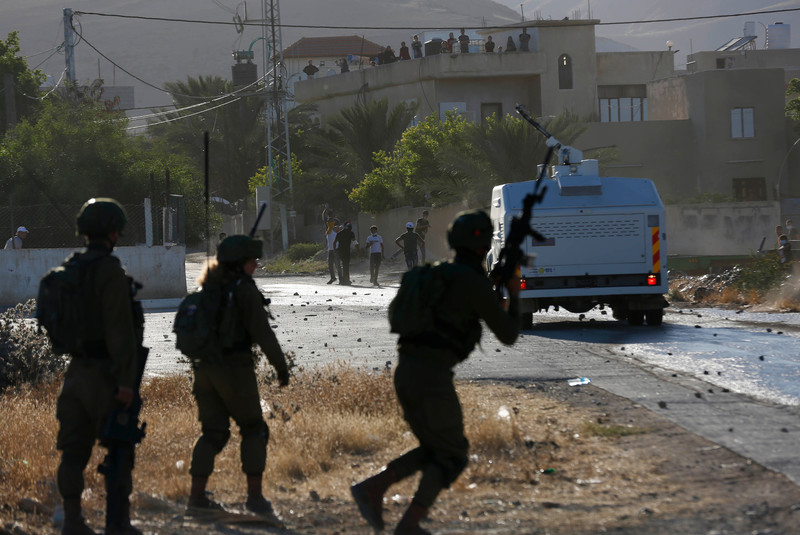 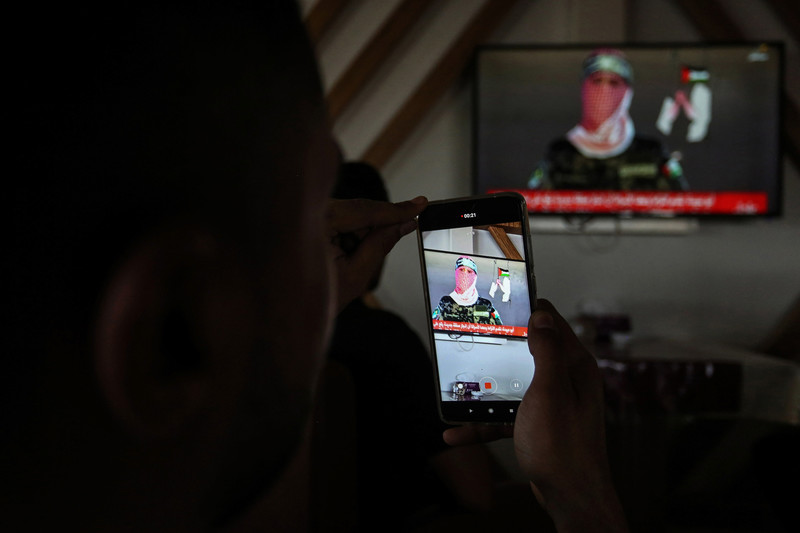 Palestinians in Khan Younis, southern Gaza Strip, watch Abu Obeida, spokesperson for the armed wing of Hamas, deliver a speech in which he warned that Israel’s extension of sovereignty to parts of the West Bank would be considered a “declaration of war,” 25 June. (Ashraf Amraundefined) 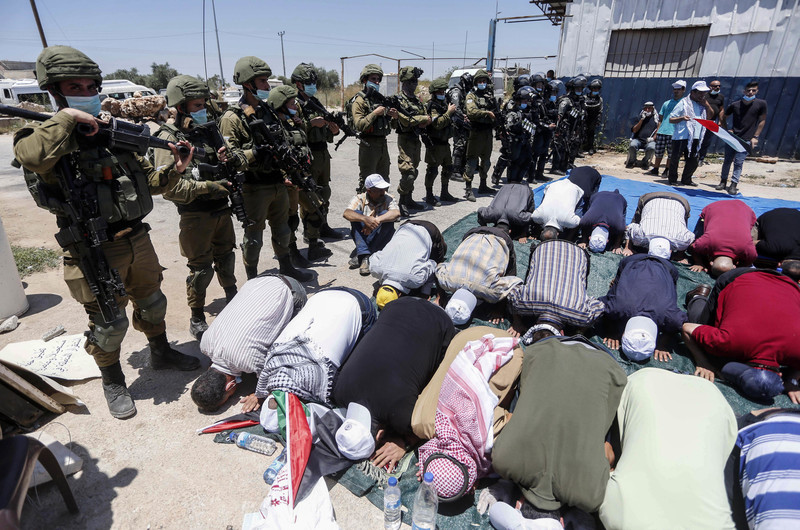 Israeli occupation forces stand by as Palestinians perform Friday prayers during a protest against annexation in the village of Haris, near the West Bank city of Nablus, 26 June. (Shadi Jarar’ah / APA images) 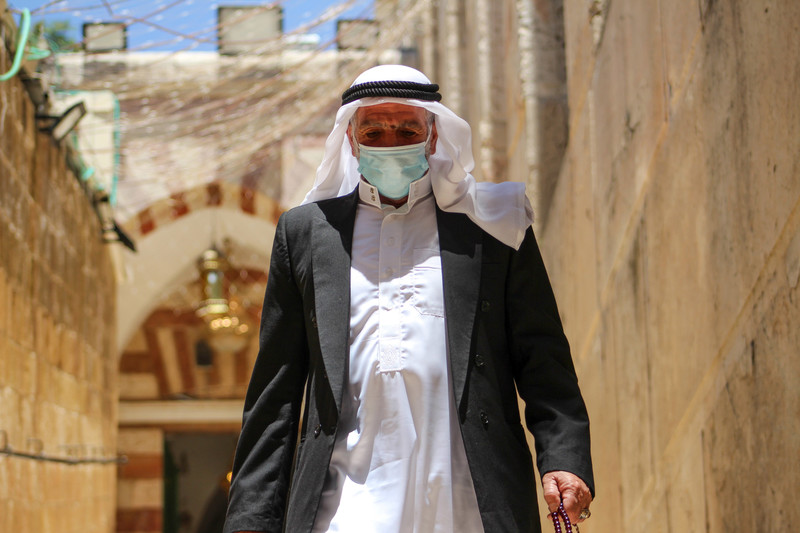 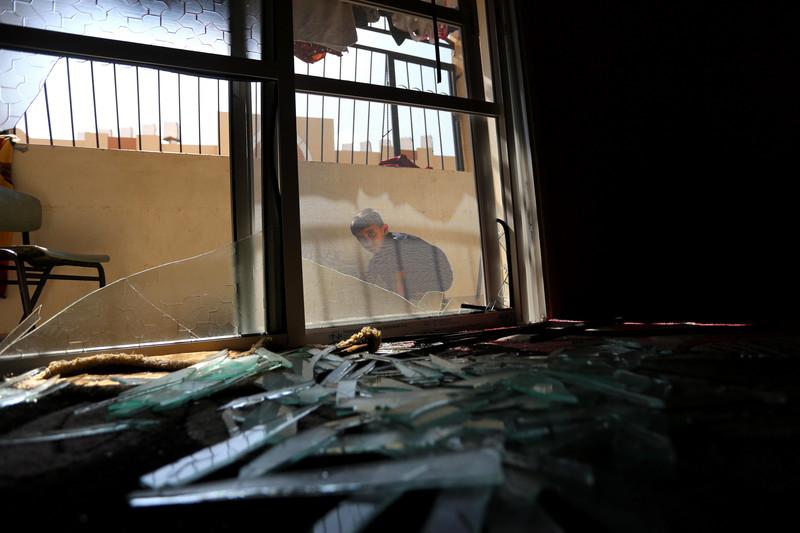 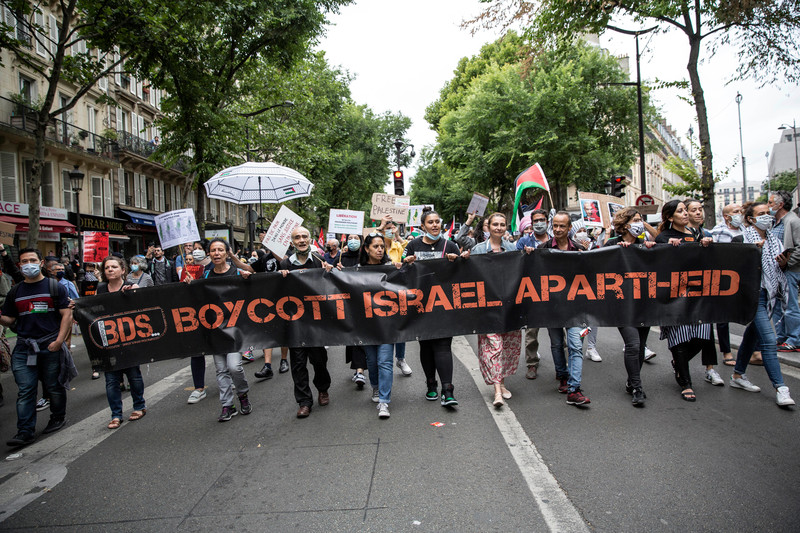 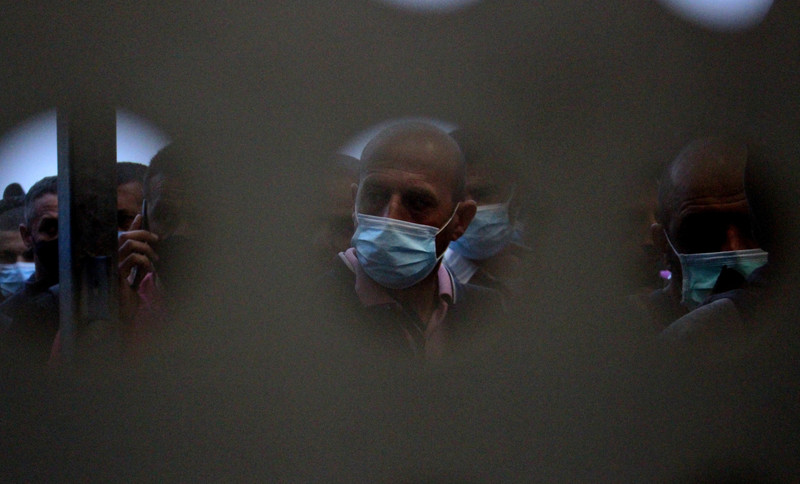 Palestinian laborers queue to enter Israel via the Mitar checkpoint in the West Bank city of Hebron on 28 June. Palestinians who work in Israel are believed to be a primary vector for the spread of COVID-19 in the West Bank. (Mosab Shawer / APA images)