Anti-Racist Iconoclasm is Bigger Than Gandhi

Many statues have been toppled or tarred in recent times: to better understand this phenomenon, the historian Enzo Traverso suggests, we need to institute “a critical culture of remembering the past” rather than erasing or damning it—including the recent past of “anti-racist iconoclasm” that has toppled figures from Leopold II to Gandhi.

Best known for his works on totalitarianism and the Holocaust, Traverso also touches on the “Islamophobic iconoclasm widespread in India,which he sses as “ a manifestation of racism”. 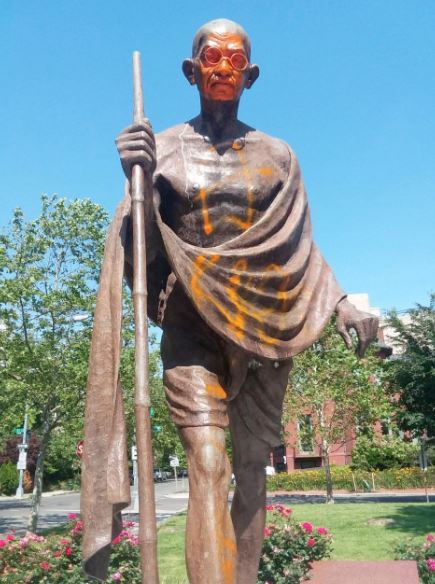 Political powers have long tried to erase history to establish their rule. Will the iconoclasm of Black Lives Matter activists propagate intolerance or bring more solidarity to the anti-racist cause?

The antiracist movement has very quickly taken a global dimension. At such a time, exhaustive knowledge and comprehension of all episodes of toppled statues —which are sometimes very different from each other in terms of the lives they led and the context they ruled in —is almost impossible. This antiracist iconoclasm is not purely spontaneous and does not mirror a “natural tendency.” It has been prepared by many activities and years of reflection about the legacy of slavery and colonialism in the world. Rather than propagating intolerance, it expresses a powerful criticism of intolerance and racism.

I think that toppled statues should not be destroyed; they should rather be conserved into museums, properly exhibited, contextualized and explained.


Merriam-Webster recently reworded their definition of racism to include “systematic oppression”. What does the phrase mean?

In many countries, repeated episodes of police violence against Blacks and other stigmatised minorities were depicted as exceptions or transgressions of an ideal democratic rule. In fact, all inquiries prove that they have a repeated and systematic character, and have permanently been tolerated or encouraged by legal authorities. In this sense, “systematic oppression” is an appropriate definition.


A variety of statues have been toppled or trashed. How does it compare with attempts to obliterate or falsify history, like with the Holocaust, or demolishing historical monuments like the Babri Masjid?

The above cases differ vastly in the scope of history. Anti-racist iconoclasm raises a fruitful debate on the past and its legacy in the present: “working through the past” (correcting the past mistakes) is an inescapable duty for a democratic society. This is different from denying the past, which is the meaning of many anti-Semitic initiatives that thrusted on damaging the sites of the Holocaust.

Unfortunately, I am not familiar enough with Indian politics to formulate a careful assessment of the Indian episodes. Having said this, I do think we should be able to clearly distinguish between anticolonial iconoclasm in the United Kingdom (or against the monumental vestiges of British colonialism in India itself) and Islamophobic iconoclasm widespread amongst the Hindu majority (and sometimes encouraged by the nationalist government), which is a manifestation of racism.


What can the role of governments be in shaping mass consciousness in a liberal way? How can the culture of collective thinking be shaped?

I think memory policies should mirror a public debate that affects our democratic societies. Ruling regimes should take up their own responsibilities in recognising the past, opening archives, commemorating victims (including the victims of crimes perpetrated in the name of the states themselves, under previous political regimes, as in Germany).

I don’t believe in shaping memory into a codified and official memory policy sponsored by ruling powers that inevitably celebrates them. Such policies exist only under totalitarian governments. Rather a critical culture of ‘remembering the past’ should be in place.


What is the role of scholars in educating the masses, helping contextualise historical artefacts?

Scholars can play a very important role in explaining and comprehending history since they don’t have any monopolistic relationship with the past. History is not their property where they have high stakes, history belongs to everyone.

Scholars, like mediators, can help us understand the process that forged our present and read the layered past. We cannot ask them anything more, this much is enough, and this is extremely essential to understand.