The United Arab Emirates and Israel have agreed to full normalization of relations, bringing their decades-long clandestine dealings proudly into the open.

The so-called “Abraham Accords” sealing the deal were brokered by US officials.

President Donald Trump on Thursday tweeted a joint statement from the three governments. 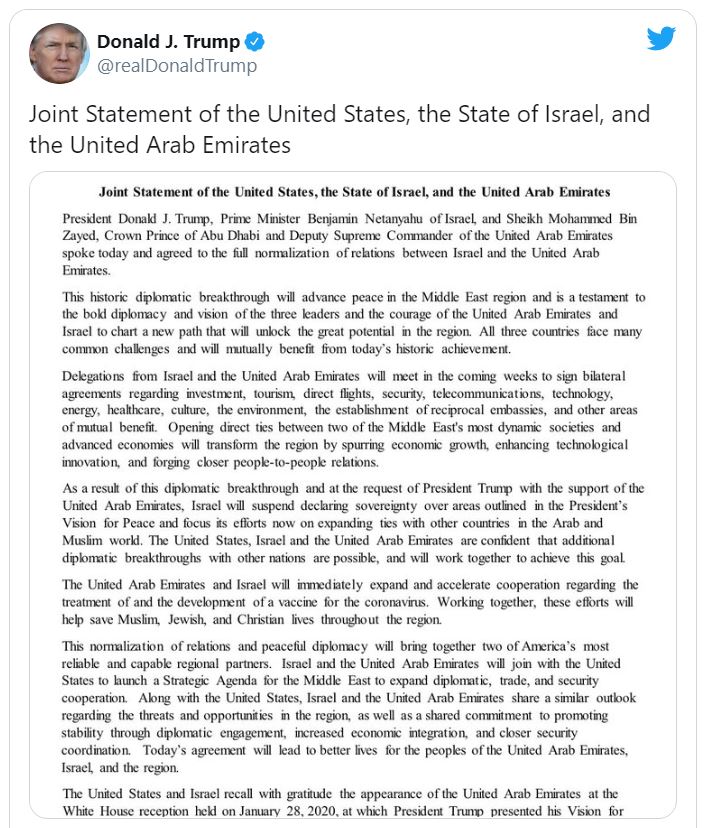 The deal is named for “the father of all three great faiths,” David Friedman, the US ambassador to Israel, told reporters at the Oval Office on Thursday.

Religious and cultural tolerance is often used by Arab states and Israel to mask their efforts to normalize ties.

Painting conflict in the region as stemming from a lack of understanding among religions is also a way to obscure its true origin: Israel’s violent dispossession of Palestinians and ongoing military occupation and steady ethnic cleansing of their land.

In exchange for normalization, Israel agreed to suspend plans to annex large swaths of the occupied West Bank “and focus its efforts now on expanding ties with other countries in the Arab and Muslim world,” according to the joint statement.

However, this is spin.

In reality, it was the United States that put Israel’s annexation plans on ice weeks ago.

In fact, Prime Minister Benjamin Netanyahu reaffirmed his commitment to annexation shortly after the announcement of the agreement.

The UAE is merely using the American-imposed freeze as an opportunity to bring its secret ties with Israel dating back to the 1990s into the open.

These secret relations have included military and intelligence cooperation and even joint military exercises.

The ground for Thursday’s announcement was laid in recent years with athletic competitions and business cooperation.

Just weeks ago, an Emirati firm struck a deal with two Israeli arms giants, supposedly to fight the coronavirus pandemic.

But the public relations messaging focusing on Israel’s agreement to suspend annexation allows the UAE to claim falsely that it achieved something for Palestinian rights, when the opposite is the case.

Relations between Israel and Gulf States including Saudi Arabia and the UAE are founded on a mutual enmity towards Iran.

Liquidating Palestinian rights and bypassing the Palestinian issue is seen as key to building up this anti-Iran alliance under American oversight.

Annexation, moreover, would only be a formal rubber stamp for what Israel has been doing on the ground for decades: stealing land, forcibly displacing Palestinians and building colonies in flagrant breach of international law.

This violent colonization has never ceased and will not stop as a result of this agreement.

The United Arab Emirates, therefore, asked for and received nothing from Israel on behalf of Palestinians in exchange for normalizing ties.

Dumping Arab Peace Initiative
The Emirates is following in the footsteps of Egypt and Jordan, which signed peace treaties with Israel in 1979 and 1994 respectively.

But the UAE is also departing from the Arab consensus that any further normalization of ties with Israel had to come in the context of an overall peace deal.

This was the essence of the so-called Arab Peace Initiative launched under Saudi auspices and adopted by the Arab League summit in Beirut in 2002.

According to that initiative, Arab states would establish normal relations with Israel only in the context of a “comprehensive peace” based on the establishment of a “sovereign independent Palestinian state on the Palestinian territories occupied since the 4th of June 1967 in the West Bank and Gaza Strip, with East Jerusalem as its capital.”

The logic was that the prospect of normalization would be an incentive to Israel and that it should not receive payment in advance.

Arab states nonetheless continued to normalize ties with Israel, but until Thursday’s announcement, none went as far as full, formal relations.

With the United Arab Emirates breaking even the minimal commitment to Palestinian rights contained in the Arab Peace Initiative, it is likely more Arab governments will follow in its path to Tel Aviv.

“We are already discussing this with other nations,” Trump reportedly said on Thursday. “So you will probably see others of these.”

The president did not mention which nations those might be, but Saudi Arabia and Bahrain in particular have been cozying up to Israel in recent years.

Israel has been seeking non-aggression pacts with Gulf states.

A report in the Palestinian newspaper Al-Quds Thursday said Oman, Bahrain and Sudan were likely to be next in line to normalize ties with Israel.

The report, by the newspaper’s correspondent Said Arikat, cited an “informed source” in Washington who declined to be named.

All three of those countries have sent signals favoring normalization with Israel. In 2018, Oman receivedNetanyahu on a high-profile visit.

Negotiations were reportedly underway in recent weeks but the deal was sealed in a phone call on Thursday between Abu Dhabi’s Crown Prince Mohamed bin Zayed Al Nahyan, Netanyahu and Trump.

Israel and the Emirates are expected to open embassies and exchange ambassadors soon.

In the coming weeks, according to the joint declaration, Israeli and Emirati delegations will sign agreements on “investment, tourism, direct flights, security, telecommunications, technology, energy, healthcare, culture” and the environment, among other areas of “mutual benefit.”

The US and Israel thanked the UAE in the joint statement for being represented when Trump and Kushner revealed their “Peace to Prosperity” plan at the White House in January. 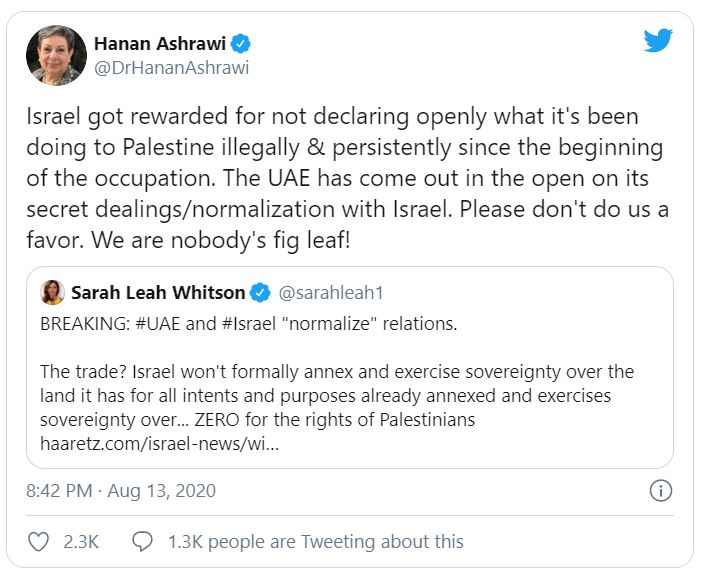 “Israel got rewarded for not declaring openly what it’s been doing to Palestine illegally and persistently since the beginning of the occupation,” Hanan Ashrawi, a member of the Palestine Liberation Organization’s executive committee, tweeted.

“The UAE has come out in the open on its secret dealings/normalization with Israel,” she added. “Please don’t do us a favor. We are nobody’s fig leaf!”

Palestinian Authority leader Mahmoud Abbas said he rejected the agreement, calling it a “betrayal of Jerusalem, al-Aqsa mosque and the Palestinian cause.”

Ashrawi and Abbas made no mention, however, of the Palestinian Authority’s long-standing cooperation with the Israeli occupation army and intelligence, to the detriment of Palestinian rights.

What may seem “historic,” in the words of Netanyahu, is only the natural conclusion of years of barely concealed normalization.

Much like Israel’s annexation plans, the agreement between Israel and the UAE merely formalizes what has been happening on the ground for decades.

Cover Photograph: President Donald Trump, surrounded by Israeli and Emirati officials, announces the agreement to establish full diplomatic ties between Israel and the UAE, in the Oval Office in Washington, on August 13.Doug MillsConsolidated News Photos