Dr. Mohsen Fakhrizadeh, Iran’s top nuclear scientist, was assassinated on November 27, 2020. His car, which was passing through Absard, a town about 70 kms east of Tehran, stopped as a booby-trapped vehicle exploded; gun men appeared; his bodyguards exchanged fire with them, and Iranian officials have said that ‘three to four’ of the attackers were killed. Fakhrizadeh was helicoptered to a hospital where he died.

We need to understand this dastardly act in context. A timeline might help:

The IAEA (International Atomic Energy Agency) comes out with a report stating that Iran has enriched 2442.9 kg. as opposed to 202.8 kg as stipulated in the JCPOA (Joint Common Programme Of Action). The report added that Iran had moved a centrifuge or two from Natanz uranium enrichment facility to an unknown place. (Having dealt with the IAEA in the past, this writer thinks that the U.S. mission in Vienna might have played a role in the timing of the report.)

President Trump discusses ‘options’ with Vice President Pence, Secretary of State Pompeo, Acting Defence Secretary Christopher Miller, and Chairman of Joint Chief of Staff General Mark Milley. Trump wanted to bomb Natanz. He was advised against it. Trump’s advisors argued that any such act “could easily escalate into a broader conflict.” Apparently, Trump accepted the advice.

“Any action against Iranian nation would certainly face a crushing response.”

“The real tools of creating a nuclear weapon are capacity, smart people, and money. These are the things that help you build out a nuclear programme.” (Italics added.)”

Trump tells the media that he would leave the White House if the Electoral College votes against him. He added, “but I think that there will be a lot of things happening now till January 20.”

The obvious question is: What might have happened between the 16th and the 27th of November, and who might have ordered the killing? We do not know as yet who paid for the 62 men involved in the assassination. But we have good reason to conclude that the Mossad did it. The Times of Israel reported:

“Top Iranian nuclear scientist Mohsen Fakhrizadeh, described by Western officials as the “father” of Iran’s atomic weapons program, was reportedly in the crosshairs of Israel’s Mossad spy agency for years before his assassination on Friday outside Tehran.”

After the 2015 nuclear deal was signed, Netanyahu has been claiming, and even more vociferously so, after Trump became President, that Iran had re-started its nuclear weapon programme under the code name “Amad” and that Fakhrizadeh was the chief of that project.

On April 30, 2018, barely a fortnight before Trump was to declare his decision to walk out of the deal, Netanyahu gave a long presentation to the media claiming Iran lied about nuclear weapons. In what he called ‘a great intelligence achievement,’ he showed a shelf of documents he claimed Israel had lifted from ‘a dilapidated’ building in Tehran. The material weighed half-a-ton – included 55,000 pages, 55,000 files, and 183 CDs. The media, however, was not invited to examine the material.

Netanyahu shared the material with the U.S. and the IAEA. Trump applauded Netanyahu. The Secretary of Defence Jim Mattis made it clear that he was not taking Netanyahu’s claims seriously and that the JCPOA should be upheld. It is well known that Mattis was opposed to Trump’s decision.The interested reader may listen to Netanyahu below:

In Ancient Rome, when lawyers found it difficult to figure out who might have committed a murder, they asked Cui bono? (Who benefits?). The answer is clear in the present case.

Now comes the question of capability. The full list of Iranian nuclear scientists assassinated by the Mossad is available only with the dreaded spy agency – and perhaps also with the CIA. The Guardian (November 27, 2020) has given details of Iranian scientists killed recently:

“In 2010, Masoud Ali Mohammadi, an expert on particle physics, was killed by a remote-control bomb strapped to a motorcycle as he was leaving his Tehran home. Later that year, another scientist Majid Shahriar, died in a similar manner when attackers rode up alongside him and stuck bombs to his car. In 2011, Darioush Rezaeinejad, an academic whose affiliation to the country’s nuclear activities is disputed, was shot by gunmen riding on motorcycles. A year later, Mostafa Ahmadi Roshan, the deputy head of Iran’s uranium enrichment facility at Natanz, was killed in a magnetic bomb attack while he was driving his Peugeot 405 to work.”

In this context it is worthwhile recalling two incidents. First, it’s widely believed that the Mossad arranged for the killing of Yahya El Mashad, head of Iraq’s nuclear programme, in a Paris hotel room on June 14, 1980. He had gone there for official work. A maid found him dead – he had been stabbed and bludgeoned to death. The only person to have seen him alive, a prostitute called Marie Express, who had accosted him at the airport and later tried to see him in the room was run over by a car a few days later. Second, the Mossad is also believed to have blown up the cores of a reactor that France was about to send to Iraq in 1979.

Could we therefore conclude, tentatively, that Israel has organised this dastardly attack? Could we also conclude further that Trump had approved the plan? For Trump, facing the disaster of an electoral defeat he is psychologically unable to accept, it might have been some consolation to see Israel carry out such an attack.

Coming to the timing, was it a parting gift from Netanyahu to Trump – who has done more than any other U.S. President for Israel, or more accurately, for Netanyahu?

There is more to this. Trump and Netanyahu had a serious purpose, to provoke Iran to take military action against Israel/U.S. forces in Iraq or elsewhere, and then to strike hard at Iran so that Trump could project himself as the Commander-in-Chief protecting America and its closest ally, Israel, and smashing to smithereens enemy Iran.

The Trump-Netanyahu plan has misfired. Iran has not fallen into the trap. Ayatollah Khomeini has not ordered a military strike against Israel or the U.S. His words were carefully chosen.

“All relevant administrators must seriously place two crucial matters on their agendas: First, to investigate this crime and firmly prosecute its perpetrators and its commanders, second to continue the martyr’s scientific and technological efforts in all the sectors where he was active.”

Many in the Israeli media and their Western counterparts have deliberately misinterpreted the words to mean that the Ayatollah wants ‘to retaliate.’ President Rouhani charged the US and its ‘mercenary’ –meaning Israel– but made it clear that Iran would not retaliate immediately.

“They are thinking of creating chaos, but they should know that we have read their hands and they will not succeed.”

The Trump-Netanyahu team might do more before January 20, 2021. Iran could respond positively and resume compliance with the JCPOA if Biden agrees to suspend the sanctions. Later, Iran, the U.S, and other interested powers can sit together and discuss security in the region. Iran might agree to accept obligations – provided others also do the same.

On the other hand, if Biden starts by asking Iran to agree to accept limits on its ballistic missiles programme and activities in the region before suspending sanctions, Iran might refuse to talk and choose to tighten its relations with China –which has offered to invest $400 billion– and with Russia.

In conclusion, the real target was the Biden presidency. Trump and Netanyahu wanted to make it as difficult as possible for Biden to re-join the JCPOA. They have not yet succeeded.

With regard to Fakhrizadeh’s assassination, there is a deplorable shortage of moral outrage in our world. At times to understand what has happened, we need to think contra factually. Imagine Iran had arranged to kill a nuclear scientist – Israeli or American? How they would have reacted? How many statements of condemnation would have been splashed across the media in the very first hour?

In the current case, the European Union waited for a full day, perhaps to see whether Israel takes responsibility, to come out with a tepid statement from a spokesperson of its chief diplomat. London, Berlin, and Paris are calculatedly silent. Is there an international community? Israel has done it again and again as it knows that given the support of the West its impunity is irresistible.

Ambassador K.P.Fabian is retired from the India Foreign Service

(Also published in the Madras Courier) 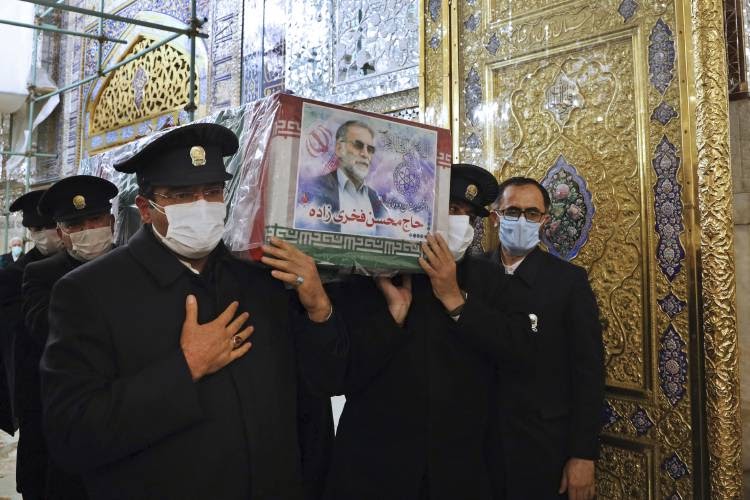