This Is the Season to Hate the Chinese

The dam on the Brahmaputra

Bogus concerns about Damming the Yarlung Tsangpo/ Brahmaputra at its Grand Canyon.

This is the season to hate the Chinese. China has done much to bring this upon itself. Its actions in Ladakh is deliberate and inexcusable. This also gives an opportunity to an ever-growing band of China baiters, Tibetan propagandists, New Delhi’s pro-western lobby and a long list of ever-incensed “patriots” to add half-truths and untruths to the narrative.

Depsang, Galwan and Pangong will pass, but the untruths in the narrative will stay for a very long time and blight our understanding of issues. This is the season when the lunatic fringe emerges from the woodwork. The RSS wants a ban on Chinese imports. Yet another bunch blamed China for the Assam floods.

The alleged diversion of the Brahmaputra (Yarlung Tsangpo in Tibet) at Zhangmu is often cited by as yet another clear sign of Chinese perfidy and the risks it poses India. Now we have another concern to stir up the pot a bit.

Last Monday, Chinese state media reported the country could build up to 60 GW of hydropower capacity on a section of the Brahmaputra, citing a senior executive. Yan Zhiyong, chairman of state-owned Power Construction Corporation of China, speaking at an industry conference, said plans to dam the river were a "historic opportunity". This is not a confirmation but an old pipe dream.

India has formally been telling the Chinese that any project they undertake, should not cause an adverse impact on India. The Chinese have given an assurance that they will keep India’s apprehensions in mind. But that was at another time. India should be concerned if the Chinese built a dam at the so-called "great bend", where the Yarlung curves southward before entering India and where the river gains substantial volume of water. This region, however, is also geologically unstable, making potential dam construction challenging, possibly a challenge too big for the Chinese too.

The Chinese have built a much smaller dam on the river at Zhangmu. This is a gravity dam on the Yarlung Tsangpo River just northwest of Gyaca in the Tibet Autonomous Region of China. It is a part of the Zhangmu Hydropower Project and supports a 510 MW power station. This became operational on 13 October 2015.

The Zhangmu dam is a run of the river project, just like the dams India is building on the Jhelum and which Pakistan vigorously contests, that is well within the rights of an upper riparian state. The bottom line here is that the upper riparian may use the water but not divert it. But the narrative internalized in India is full of jingoism and ignorance, as is in many other matters relating to relations with neighbors, and has caused so much of quite unnecessary controversy in India

At the political level, the government which could ill-afford to be impervious to public opinion, however ill- informed it may be, responded by appointing an Inter- Ministerial Expert Group on the Brahmaputra. This expert group only recently expressed concern about China keeping a lower riparian ignorant about its activities and plans. This is a well-founded concern as China has made a practice of shrouding in secrecy even the most normal and often innocuous.

Some years ago a landslide at Parechoo near the India-Tibet border had backed up the Sutlej into a huge lake that if it suddenly broke loose would have caused havoc downstream in Himachal. India kept asking for details but it elicited a stony silence from China. Mercifully nature resolved this amicably. India naturally wants to be fully informed about Chinese and nature’s activities having a bearing on it near the India-China border.

But we have yet other concerns. There is no water sharing agreement. But is this important? Writing on this, a consultant at our MEA, cautions us on three counts: “First, China's attempt to build infrastructure in Tibet and improve its connectivity with the Chinese mainland has been one of China's major strategies, not only in terms of military preparedness but also to overcome the challenge of regional disparity. Second, China has been working on improving infrastructure and connectivity with the frontier states along its border. Finally, the Brahmaputra is a major lifeline for India's northeastern region. If the situation continues unabated, it will have long-term implications for India.”

Lets examine these. Should not the improvement of infrastructure with its own territory be the concern of every government? Are we to keep complaining about every road or bridge, lest military vehicles use them? Our first two concerns are not really serious. Then there is the concern over the Brahmaputra waters. We need to familiarize ourselves with some realities.

Many Indian and international security experts have been warning of the coming of “water wars” between the two countries. A few years ago the late BG Varghese, an acknowledged expert on the India-Pakistan-China water disputes and myself made a presentation on this subject at the well-known think-tank, the Center for Air Power Studies (CAPS). We showed that India and Bhutan together generate about 86% of the system’s input.

China accounts for almost half the basin area, but it actually contributes a fraction of the system’s input of waters. The narrow Yarlung Tsangpo actually becomes the mighty Brahmaputra only after it enters India at the Great Bend. Yet the water wars narrative persists.

The supporters of this narrative believe that China already has a plan to divert the Brahmaputra River – more specifically, the western route of China’s South North Water Diversion Projects. Writing about this Zhang Hongzhou, of the S. Rajaratnam School of International Studies (RSIS), Nanyang Technological University, Singapore unambiguously states, “This is a misperception. It is the Grand Western Water Diversion Plan (GWWD), which was proposed by Chinese water expert Guo Kai. It was to divert water from the upstream sections of six rivers in southwest China, including upstream Mekong, the Yarlung Tsangpo River, and the Salween, to the dry areas of northern China.”

It was only an idea. And it will be no more than an idea.

It is the deepest canyon in the world, and at 504.6 kilometres is slightly longer than the Grand Canyon in the United States. As the gorge bends around 7800 metre tall Mount Namcha Barwa and cuts its way through the eastern Himalayan range. Its waters drop from about 2,900 metres (9,500 ft) near Pei to about 1,500 metres (4,900 ft) at the end of the Upper Gorge where it is joined by the Po Tsangpo river.

The river continues through the Lower Gorge to the Indian border at an elevation of 660 metres (2,170 ft). The river drops at an average of 10 metres every kilometre making it a raging torrent all along the canyon.

Now imagine the physical challenge of damming this canyon. The Three Gorges Dam is a much smaller engineering feat, and if it is meant to also provide water to Yunnan the water has to be lifted a few thousand metres and monumental cost. Even in China a cost-benefit analysis will its unviability apparent.

Equally significant is the contribution from Bhutan, which accounts for 6.7 percent of the total basin area but generates 21 percent of the system output. Other experts estimate that only 14 percent of the Brahmaputra’s flow is generated in China, the other 86 percent comes from India.

The utilization rate of water in Brahmaputra River is very low. Professor Pranab Kumar Ray, Director, Centre for Hydro-Meteorological Research, Kolkata writing in “Rivers of Conflict or Rivers of Peace” a paper published by the ORF, estimates that the utilizable water of the Brahmaputra system is a mere four percent of the total discharge.

This being a reflection of the very high speed of the discharge and its sheer volume. This is to say, even a 10 percent or 20 percent reduction in the water flows of Brahmaputra River would be unlikely to cause water scarcity of any nature in the Indian part of the basin.”

Quite clearly the “water wars” scenario in patently bogus as far as the Brahmaputra is concerned. We need to think of ways to harness more of the mighty Brahmaputra for power and agriculture to serve the people of India (and Bangladesh) rather than to let 96 percent of it to just run into the Bay of Bengal. We need to work with Bangladesh closely rather than just keep pointing fingers at China. 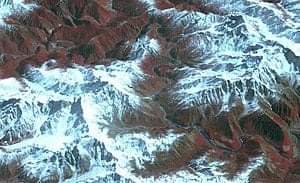 Cover Photograph 1 is the Yarlung Tsangpo Grand Canyon which is the longest and deepest canyon on land. 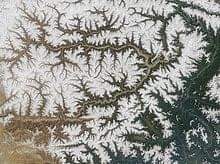 Cover Photograph 2 shows the Yarlung/Brahmaputra as it turns into India. Yet it gathers about 86% of its water after it enters India.