On December 26, 2020, the government of Tunisia had extended for six months the state of emergency that had been imposed in 2015 following at attack on the Presidential Palace that had been claimed by the Islamic State. The state of emergency had been repeatedly extended and had given exceptional powers to the country’s security forces. Measures that enabled control of the press and placed a ban on strikes and meetings leading to “disorder” had formed part of the emergency regulations. The extension of the emergency had come in for criticism from human rights groups who said that the measures taken had led to widespread human rights violations.

Tunisia was the fountainhead of the 2011 Arab Spring—the mass uprising of peoples in many Arab countries against the failure of established regimes to meet the peoples’ aspirations. But while many of the Arab Spring countries had descended into civil war like Yemen and dictatorships like Egypt, the Tunisian political forces had relied on dialogue and cooperation that had enabled democracy to survive. The Jasmine revolution as it was known in Tunisia had forced strongman Zine al-Abidine Ben Ali to flee. A new constitution had been framed that provided for civil liberties and women’s rights while limiting the power of the armed forces. Hundreds of new newspapers were launched, along with political parties and civil society groups. Tunisia emerged as a centre of Arab political change and reform, with think tanks and democracy promotion groups from abroad turning it into their headquarters.

The first post revolution elections were held in 2011 which brought the moderate Islamic Ennahda party to power. Tunisia had gone through several elections since then with the last one held in 2019. But the outcome of the elections had created a bitterly divided Parliament with parties unable to form a government for months. The first candidate for Prime Minister Habib Jemli, put up by the largest party the Ennahad, had failed to secure a vote of confidence. Then the newly elected President Kais Said, using his prerogative, had named Elyes Fakhfakh, a former Tourism Minister to form the Government. Fakhfakh was able to win the vote of confidence and formed the government.. But effective governance had been hindered by continuous bickering over cabinet seats with the result that important decisions for the country’s benefit failed to be taken.

Fakhfakh’s government lasted only till July 2020. He resigned when he lost a vote of confidence moved by Ennahada on the grounds that he owned shares in companies that had received state contracts suggesting a conflict of interest. He was succeeded by the Interior Minister Hichem Mechichi whose government was also considererd fragile.

The shenanigans of the political parties had created a sense of disaffection amongst the people as they saw the promises of the Jasmine Revolution remain unfulfilled. The people were today being forced to face the sober reality that economic stagnation, corruption, and political and cultural polarisation had not been addressed. There had been a spate of public protests in recent weeks across Tunisia’s poorer southern regions including Sidi Bouzid where a street vendor’s suicide had sparked off the Arab Spring. Today large posters had appeared on the walls reading “..We prepared the way for freedom, but you drifted away from it,” and “Slogans must be turned into action.”

Observers had commented that the anger today was greater than in the past when there had been hope that things would change for the better after the introduction of real democracy. There had been strikes, road blockages and protests in recent weeks as people demanded jobs, more investment, better work conditions, and improvements to crumbling public services. Salaries had been devalued by inflation, while political instability had crushed hopes for fundamental reforms. Corruption remained unchecked. There was a growing feeling that something had gone wrong with the revolution and that peoples’ dreams and aspirations remained unfulfilled—a point of view endorsed even by people like Attia Athmouni, a retired philosophy teacher who had helped lead the uprising. Jobs and Dignity-key promises of the revolution- remained just promises.

Human Rights Watch in a report published in February 2020 had urged the Tunisian government to make human rights a priority in the country, and asked the government to protect fundamental rights in eight key areas: ending criminal prosecutions for peaceful speech, arbitrary arrests by the police, abuses under the state of emergency, violence against women, the persecution of homosexuals, achieving accountability for past human rights violations, and reforming its judicial and security sectors. Despite democracy there was still a remnant of authoritarianism exemplified by restraints placed on free expression under the emergency decrees.

There had been calls in Jendouba for Prime Minister Hichem Mechichi was met with cries of to resign when he visited the city. Tunisia’s national unemployment rate was over 20 percent, disproportionately hitting young people in the interior areas and reports indicated that more and more Tunisians were trying illegally to leave the country while visions of jihad were again luring alienated, jobless youth in a country from where large numbers had earlier gone to join Islamic State.

The coronavirus pandemic was hurting even more than expected. Tunisia had had 4000 deaths. According to a World Bank report the economy had contracted by 21 per cent. Tourism revenues had declined 47 per cent and exports were down by 27 per cent as of the middle of this year. Government debt had soared, limiting potential public spending. The country was talking to the International Monetary Fund for financial assistance, and also with China-led development banks.

The fragility of the current government was evident when the courts called for the detention of Nabil Karoubi, the leader of the Heart of Tunisia party, on the charge of financial corruption. His was the second-largest party in Parliament, and one of the three supporting the current technocratic government. A presidential candidate, he had spent most of last year’s presidential campaign in jail for the same charges, which he called politically driven. A breakup of the pro government parliamentary coalition would weaken the government of Hichem Mechichi, which was already facing unprecedented economic hardships and protests in many regions.

Tunisia was also being drawn into the dispute over Turkey’s gas exploration in the East Mediterranean. France which was opposed to Turkey’s moves was seeking to use its old colonial clout to persuade Tunisia to oppose Turkey. But French influence was waning as even in Parliament a resolution had been moved, but did not succeed, to get France to apologise for atrocities committed during colonial rule. French language and culture continued to dominate with a knowledge of French required for many jobs.

But there was some resentment that the French were stymying the blossoming of Arab culture with many appreciating that Tunisia’s President spoke in Modern Arabic. Rached Ghannouchi, intellectual leader of the Ennahda party which won the post-revolution elections in 2011, had criticized the French “pollution” of Tunisia’s culture and Arabic language. Many Ennahada leaders spoke English having lived in exile in the United Kingdom.

One option for the country’s future was described by an observer as a continuous revolution and protests citing the example of Algeria and Sudan where mass uprisings had ousted entrenched leaders there last year.

The other more worrisome option for some observers was the possibility that secular Tunisians might end up voting for new populist pro-authoritarian groups, reportedly backed by countries like the UAE, which were propagating that the revolution was a mistake and that it was better to return to the type of strongman rule exemplified by Egyptian president Abdel-Fattah el-Sisi rather than stick to a messy democracy. 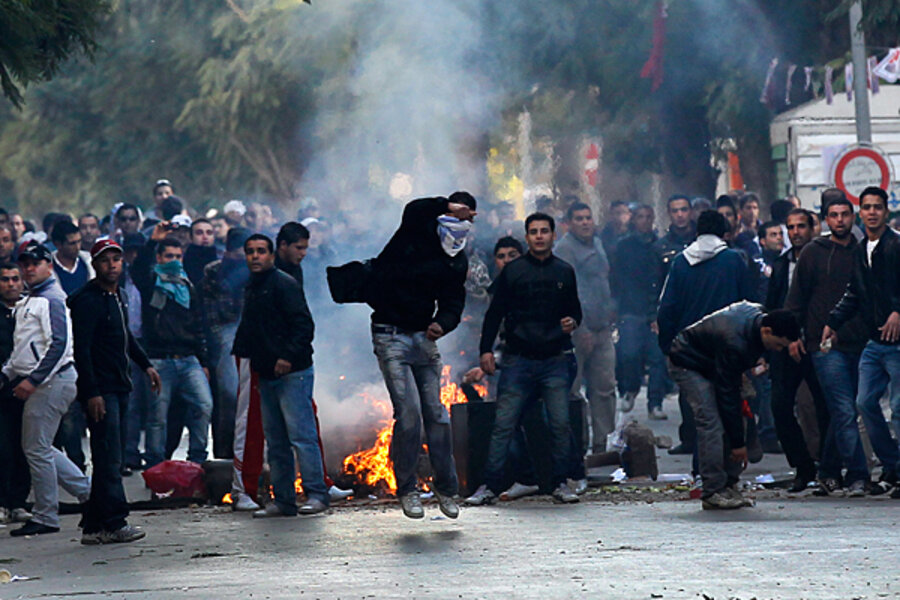