“My crown I am, but still my griefs are mine. You may my glories and my state depose but not my griefs; still I am king of those.” (King Richard in William Shakespeare’s Richard II)

For the outside world Trump Impeachment 2.0 can only appear as a kangaroo trial. A better way for the American lawmakers would have been to pass a law that the US shall never ever promote “colour revolution” abroad or at home. The US has destroyed so many countries by inciting their peoples to besiege established governments and force them to capitulate to drag them into its orbit. Are they to be called “insurrections”?

On top of it, president-elect Joe Biden is reportedly all set to reward one of the US’ most successful promoters of insurrections abroad in modern times by appointing her as the new Undersecretary of State for Political Affairs in his administration — Victoria Nuland.

Nuland has been photographed distributing sandwiches to the ‘insurrectionists’ camping in tents on Kiev city square in the winter of 2013-2014 and she has been caught on tape abusing the European Union for impeding her project. All that doesn’t seem to perturb Biden or Nancy Pelosi. What rank hypocrisy!

This ongoing project to impeach President Donald Trump for a second time in a little over a year is farcical. This will be the first time in the 231-year history of the United States that a president has been impeached twice in his term.

What happened in Washington, DC, on January 6 was by no means an insurrection. Of course, US citizens were behind the Capitol Building siege. But the parallel ends there. There was no way they could have usurped power in America last Wednesday. In fact, even the vandalism was entirely due to the ineptness of the security personnel deployed there.

The BBC has carried a factual/analytical report on what Trump had said at the “Save America” rally organised to challenge the election result near the White House. The explosive quotes are as follows: ‘We won this election, and we won it by a landslide’ / ‘We will stop the steal’ / ‘We will never give up. We will never concede. It doesn’t happen’/ ‘If you don’t fight like hell you’re not going to have a country anymore’ / ‘Peacefully and patriotically make your voices heard’ / ‘We are going to the Capitol.’

Were they so very incendiary as to destroy the US political system? Can Trump be removed from office or banned from politics for saying the above? The BBC sought the opinion of the eminent American legal scholar and professor of law at the University of Baltimore, Garrett Epps. Prof. Epps concludes, “In the end, I think it’s a jury question.”

In the best case scenario, the jury should be the American people. In the proposed impeachment, on the other hand, this case can be dismissed by the 100-member US senate body, which will sit as a jury presided over by the chief justice of the Supreme Court. The outcome of that trial will be known only after Biden’s inauguration.

The Democrats dearly hope that unlike a year ago when the Republican vote rallied solidly behind Trump, this time around, the political mood may change now that he is out of power. In the House of Representatives yesterday, 10 Republican members broke ranks to support the impeachment resolution. (Liz Cheney, the third-ranking Republican in the House and daughter of former Vice-President Dick Cheney, was the most notable defection.) Reports suggest there might be similar happenings during the impeachment on the Senate floor. Axios reports that even Majority Leader Mitch McConnell reserves judgement until the trial is concluded.

In reality, what is on trial is “Trumpism”. The odds are stacked against Trump. He’s been silenced from the omnipotent social media, including his pet Twitter account. But the public opinion polling suggests that he still has a significant well of support within his party. The Democrats who fear Trump may rise like a Phoenix out of the ashes in 2024, are hoping to to deliver a lasting knockout to him, banishing him from America’s public life, stripping him of his right to contest elections in future. This is the real agenda of the political game playing out in Capitol Hill.

What happened to American exceptionalism? In the most recent years, many other western democracies have faced such a quandary of the alienated public being drawn toward the heady cocktail of populism and nationalism of the sort Trump patented — in Germany, France, Spain, Italy, Austria, Sweden, Finland, Estonia, Poland, Hungary, Slovenia, Greece. Indeed, nationalism has been a recurring feature across Europe’s political spectrum and there has been a recent boom in voter support for right-wing and populist parties, out of anger and frustration with the political establishment over perceived dilution of national identity, economic deprivation and inequality, etc.

But Europe preferred to take the democratic route to meet the challenge. Germany’s is a case in point. Angela Merkel didn’t panic. And the latest poll by the Kantar research institute suggests that in just a year, the far-right populist AfD has dropped from first to third position in eastern Germany — the party’s longtime stronghold. On the other hand, far-right has also become the “new normal”, the ruling party in Austria, Poland and Hungary.

Fundamentally, if the European option is not open to the US, that is because of its skewed democracy where politics is disconnected from the masses and is conducted by cabals within the two parties’ establishments.

Herein lies the danger. What is the guarantee that another Trump will not arise from outside the cabals that preside over politics in America and reaches out to the people directly? The fact of the matter is that Trump’s support base still remains the envy of any American politician. Seventy million Americans voted for him last November. That massive support base will feel further disenfranchised or disempowered by what the cabals are perpetrating on the Capitol Hill.

The real paradox is that the “mob” who besieged the Capitol building was largely drawn from the American middle classes — the petite bourgeoisie or the ‘transitional class,’ as Karl Marx described them, in whom the interests of the major classes of capitalist society — the bourgeoisie and the proletariat — meet and become blurred, and which is located between these two classes in terms of its interests as well as its social situation.

The concentration and centralisation of capital in America has eventually thrown the petite bourgeoisie into the ranks of the increasingly immiserated working class (proletariat), but it continues to defy not only the elimination but also the neat categorisation into the proletariat.

The values the petite bourgeoisie represents — of entrepreneurship at the grass-roots level, self-help, individualism, family, and careful husbanding of resources— are such that despite being buffeted by recessions, loss of jobs and unemployment and mounting bankruptcies, it continues to provide a stereotyped model of past virtues. This class is progressive only in a limited sense.

Make no mistake, this class is here to stay in America and if the post-pandemic economic recovery does not go brilliantly well or is mismanaged, its ranks will swell further. That is going to be Biden’s real challenge even if Pelosi were to dispatch Trump into political wilderness. 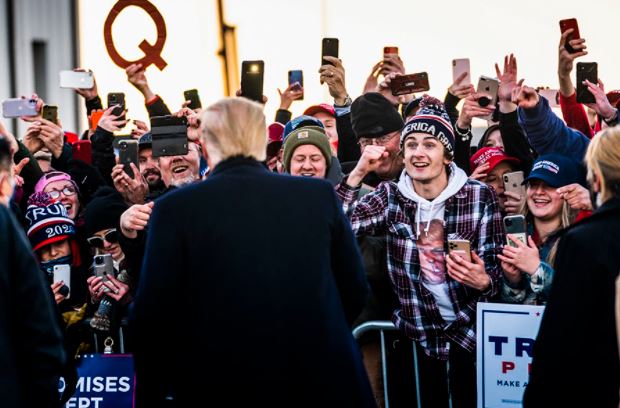