Grim Prospects for Sri Lanka at the UNHRC in Geneva

COLOMBO: In all likelihood, Sri Lanka will face a tough resolution at the March session of the UN Human Rights Council (UNHRC) in Geneva, as the draft sent to the Sri Lankan Foreign Ministry by the Office of the High Commissioner for Human Rights (OHCHR) for comments, shows.

Admittedly, what Colombo has received is only a draft of the OHCHR’s case against Sri Lanka. It is to be modified with the comments of the Lankan government. And what will emerge eventually might be milder, having taken into account the rebuttals of the Lankan government based on its case that the allegations of war crimes are essentially unsubstantiated and one-sided. Nevertheless, the final document is expected to be against Colombo.

One of the main reasons for this will be the Gotabaya Rajapaksa government’s tough posturing on the rights issue and its forthright opposition to meddling by foreign governments and agencies like the UNHRC in its internal affairs. Colombo has told the OHCHR in no uncertain terms that it will no longer co-sponsor any resolution against itself.

Such an assertion, by itself, could weaken any chance of a compromise. Earlier, co-sponsorship had led to a significant dilution of the resolution, cushioning Lanka against hard demands on sensitive matters like setting up accountability mechanisms with foreign participation.

The second factor toughing the resolution will be the Tamils’ unity. For the first time, the Tamil political parties in Sri Lanka have given a joint list of demands to the international community. These demands are the most radical, to date. They have demanded that Sri Lanka be hauled before the International Criminal Court (ICC) which means taking its case to the UN Security Council.

The third factor is the heightened role of the Tamil Diaspora ensconced in Western democracies. The well-to-do and well-connected Diaspora is not only lobbying with the powers-that-be in various Western countries but are also financially backing the Tamil parties back home in Sri Lanka. According to Tamil political sources, money is no issue and over 500 websites and blogs propagate the Tamils’ case worldwide.

The fourth factor is the change of guard in the White House. Donald Trump, who cared little for human rights, has been replaced by Joe Biden who has put promotion of human rights on top of his agenda. He will bring the US back into the UNHRC. He will play a key role from behind the scenes if the US is not yet a member. Western nations will be US proxies in the council.

The current draft resolution says that it is “vital that the Human Rights Council takes further action on Sri Lanka for three important reasons: Firstly, the failure to deal with the past continues to have devastating effects on tens of thousands of survivors — spouses, parents, children, and other relatives — from all communities who continue to search for the truth about the fate of their loved ones, to seek justice and are in urgent need of reparations.

Secondly, the failure to advance accountability and reconciliation undermines the prospects for sustainable peace, human and economic development in line with the 2030 Agenda and carries the seeds of repeated patterns of human rights violations and potential conflict in the future.

Finally, the trends highlighted in this report represent yet again an important challenge for the United Nations, including the Human Rights Council, in terms of its prevention function.”

The draft points out that “by withdrawing its support for resolution 30/1 and related measures, and by repeatedly failing to undertake meaningful action across the full scope of that resolution, the (Lankan) government has largely closed the possibility of genuine progress being made to end impunity through a domestic transitional justice process.”

It goes on to state that the members have the option of referring Sri Lanka to the International Criminal Court. They can investigate and prosecute international crimes committed by all parties in Sri Lanka before their own national courts, including under the principles of extraterritorial or universal jurisdiction, it added.

“The High Commissioner encourages Member States to work with OHCHR, victims and their representatives to promote such avenues for accountability, including through opening investigations into possible international crimes, and to support a dedicated capacity to advance these efforts.”

“Member States can also apply targeted sanctions, such as asset freezes and travel ban against State officials and other actors credibly alleged to have committed or be responsible for grave human rights violations or abuses, as well as support initiatives that provide practical benefits to victims and their families,” the draft said.

However, UNHRC resolutions are not mandatory. Principally, they serve to name and shame recalcitrant countries. Member States’ actual policies or executive decisions will be based on political, economic and geo-political factors and compulsions and not on the resolutions per se.

Nevertheless, a tough resolution helps twist a recalcitrant State’s arm and wrest various concessions from it in the political, economic and geo-political sphere. The March 2021 resolution on Sri Lanka may be made to hang like the Sword of Damocles on the country. It could be used to squeeze various kinds of concessions from it.

An important factor in this regard will be the attitude of the Biden Administration. President Biden will put moral pressure on Sri Lanka while abjuring abrasive threats. India’s stand too will be a critical factor. India is a regional power and Sri Lanka’s immediate and only neighbor. It has issues with Sri Lanka, the most important of which is its bid to get the Colombo Port’s East Container Terminal (ECT).

India wants a foothold in the port for geo-strategic reasons because the Chinese are already operating a terminal there. But the Sri Lankan government is under pressure from the nationalist (anti-Indian) lobby not to give it to India. Currently there is an uneasy stalemate on this matter.

In addition, India has political issues with Lanka. There is a strong move in Sri Lanka to dilute or do away with the system of devolution which was introduced in 1987 as a result of the India-Sri Lanka Accord of that year to solve the Tamil question.

Indian Foreign Minister, Dr.S.Jaishankar, had personally conveyed to the Lankan President last month, Delhi’s view that Sri Lanka should abide by the devolution system as contained in the 13 th. Constitutional Amendment in its own interest.

If India-Lanka relations deteriorate, India’s support for Sri Lanka in international forums will be in doubt. Sri Lanka can, of course, turn to China and Pakistan for succor and these two countries will definitely come to the island nation’s aid. But this may further exacerbate tension with India. And China might use Sri Lanka’s vulnerability to wrest more economic and geopolitical rights than it already has. 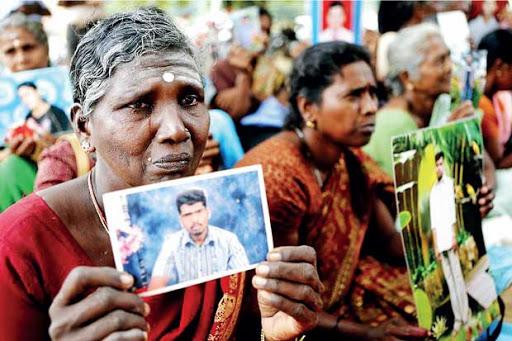