Since November 2020, Ethiopia has been locked in a brutal internal conflict. The fighting has been taking place between the forces of Ethiopia’s Nobel Laureate Prime Minister Abiy Ahmed supported by his erstwhile foe turned ally the President of Eritrea Isaias Afwerki --- and the formidable forces of the Tigray People’s Liberation Front (TPLF) which set up its own Parliament and Government.Ethiopia, the largest country in Africa, has a federal structure and a multi ethnic composition.

The Ethiopian government had placed a ban on the internet and telecommunications as well as on the entry of organisations like the International Committee of the Red Cross, NGOs, the media and humanitarian organisations. Reports suggest that more than 50000 people have fled the Tigray region. Testimony from those fleeing the conflict suggests that widespread massacres and rapes have occurred at the hands of the Ethiopian forces.

With conscription compulsory in Eritrea nearly 100000 Eritreans were said to have taken refuge in camps in Tigray and were now fleeing to Sudan. Pramila Patten, the UN’s special representative on sexual violence in conflict has said that there have been reports of soldiers exchanging commodities for forced rape and individuals being forced to rape their own family members.

According to the UN’s special advisor on the prevention of genocide, reports indicate that the Ethiopian government is said to be targeting civilians based on their Tigray ethnicity both within the region and outside. Ethiopia had refused an independent investigation about human rights saying that the government could itself monitor the situation.

Of Muslim and Christian parentage and mixed ethnicity Abiy came to power in Prime Minister Abiy Ahmed came to power in 2018. He broke apart the powerful ruling coalition of the ethnic and region-based parties of the Ethiopian People's Revolutionary Democratic Front, which had governed Ethiopia for 30 years and was acknowledged to have been repressive and regressive. He merged the ethnic and regional parties and created a new party called the new Prosperity Party. The TPLF refused to join the new party as the Tigray leaders saw his moves as a means to weaken the federation and their dominant role.

Abiy’s government welcomed opposition figures home from exile, and released others from prison, including some who had been sentenced to death. He also signed a peace treaty with Eritrea with whom the former government had fought a border war. His actions earned him the distinction of being seen as a reformer and he was awarded the Nobel Prize for Peace.

The Prime Minister postponed the elections originally scheduled for August 2020 citing the coronavirus pandemic. He said the elections would take place in 2021 but no date was specified. The Tigray leadership rejected the postponement and said that the failure to hold elections as scheduled made Abiy an illegal ruler.

Arrest warrants were issued for Gebremichael and other leaders. Ethiopia’s parliament appointed Dr Mulu Nega as the Chief Executive of the Tigray Regional State. Once the conflict began Ethiopia began offering a 10 million birr ($260,000) reward to anyone with information on the location of fugitive leaders of the TPLF who the military said had taken refuge among civilians.

The current fighting began on November 3, 2020. The TPLF forces-whose numbers had been estimated to be 250000-attacked the Northern Command bases and headquarters of the Ethiopian National Defense Force (ENDF) in Tigray Region.

The swift attack was reported to have allowed the TPLF to effectively incapacitate the northern command of the national army and seize a sizeable portion of the national army’s arsenal. There was apprehension that having declared Abiy an illegal ruler and having taken armed action the TPLF might decide to march on the capital Addis Ababa.

The Federal Government was left with few options—capitulation; negotiation with a powerful TPLF; or launching an offensive. The third option became viable when Eritrea, which had had an armed conflict with the former Ethiopian government dominated by the TPLF, from May 1998 to June 2000, decided to side with Abiy. Eritrean President Isaias Afwerki saw this as an opportunity to take revenge on the Tigrayan leaders who, as the dominant force in the pre-Abiy government, had seized Eritrean territory.

Till 2019, Ethiopia continued occupy the territory near Badme, including the town of Badme. On 5 June 2018, the ruling coalition of Ethiopia (Ethiopian People's Revolutionary Democratic Front), headed by Prime Minister Abiy Ahmed, had agreed to fully implement the peace treaty signed with Eritrea in 2000 with peace declared by both parties in July 2018.

Addressing the Ethiopian Parliament PM Abiy Ahmed said that Eritrea had fed, clothed and armed retreating Ethiopian soldiers when the TPLF first attacked them and seized their bases in Tigray. He said this made it possible for them to return to fight the TPLF. He said that that Eritrean people had shown they “a relative standing by us on a tough day,".

Both Ethiopia and Eritrea had denied a US State Department report that Eritrean soldiers were involved in the fighting in Tigray. Mr Abiy had informed UN chief António Gueterres, that there were no Eritrean troops in Tigray, except in territory that Ethiopia had agreed to hand over following a the peace deal between the two nations that he had been instrumental in concluding in 2018.

The fighting had gone on for several weeks with the Federal Government announcing that they had seized control of the Tigray region’s capital city of Mekelle. Abiy said that the war was over on November 28 after Mekelle was taken but The TPLF stated in late November 2020 that it would continue fighting, until the 'invaders' were driven out.

Abiy had reportedly taken recourse during this period to oppressive measures reminiscent of the former regime such as the full shutdown of internet and phone communications and denial of humanitarian access to affected areas. Although Abiy’s political survival might have necessitated such moves they, coupled with the reports of massacres and rapes by his forces, had somewhat tarnished his image of a reformer who would transform the Ethiopian polity.

With the TPLF determined to continue the fighting there is a lurking possibility that Ethiopia will face both economic and ethnic problems particularly if Abiy decides to adopt the authoritarian route. Ethiopia’s government had expelled an analyst with the International Crisis Group, William Davison without giving any formal reason.

Warning letters to the news agency Reuters’ Ethiopia correspondent and to the BBC and Deutsche Welle stations had also been issued. On the economic front the European Union had postponed nearly 90m euros in budget support payments to Ethiopia. Major conflict could also hinder foreign investment in Ethiopia’s economy, which had achieved nearly double-digit annual growth for years before the coronavirus hit and was liberalizing, with multinationals particularly eyeing the telecoms sector.

PM Abiy had not agreed to calls by the United Nations, the African Union and others for a ceasefire and talks. The TPLF had said it would not negotiate with the federal government. Sudan’s Prime Minister Abdalla Hamdok said he and Abiy had agreed to hold an urgent meeting of a bloc of East African countries, the IGAD, to resolve the crisis.

But so far the stalemate continues and there are fears that the continuing tension could exacerbate ethnic conflict and that, if not ended quickly, it could paralyze the Ethiopian government and possibly destabilize the Horn of Africa. 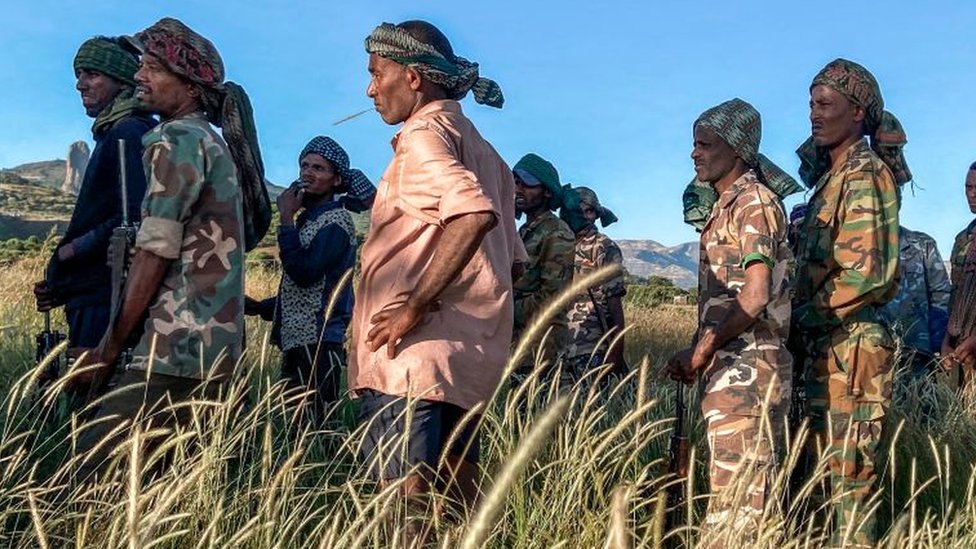