COLOMBO: Reacting to signals from the Sri Lankan government that it is opting out of the May 2019 trilateral Memorandum of Cooperation (MOC) between Sri Lanka, India and Japan to build and run the East Container Terminal (ECT) at the Colombo Port, the Indian High Commission said on Monday that it expects all parties to adhere to the MOC.

“ I would like to reiterate the expectation of the Government of India for the expeditious implementation of the trilateral Memorandum of Cooperation (MOC) signed in May 2019 among the Governments of India, Japan and Sri Lanka for the development of ECT with participation from these three countries,” a statement issued by the spokesman of the High Commission said.

“The commitment of Government of Sri Lanka in this regard has been conveyed several times in the recent past, including at the leadership level. The Sri Lankan cabinet also took a decision three months ago to implement the project with foreign investors. All sides should continue to abide by the existing understandings and commitment,” the spokesman added.

When asked if India would accept a reported suggestion from a government minister Dr.Nalaka Godahewa, that foreign entities could build the West Container Terminal (WCT) instead of completing and running the ECT, the spokesman said that the Indian mission had not been informed about any such proposal.

Last weekend, Dr. Godahewa, who is the State Minister for Urban Development and Coast Conservation and is a key member of the think tank Viyathmaga close to President Gotabaya Rajapaksa, said that he and Dr.Priyath Bandhu Wickrama had talked with the protesting port workers’ unions and that he agreed with them that the government should develop the East Container Terminal on its own.

Godahewa pointed out that this was in the election manifesto of the ruling Sri Lanka Podujana Peramuna (SLPP).

The unions had been insisting that the ECT should not be given to any foreign entity. They pointed out that the ruling party had mentioned it in its election manifesto. The unions were backed by leading Buddhist monks as well as a number of political parties both within the ruling coalition and outside.

After meeting the unions, Dr. Godahewa met President Gotabaya on the same day and briefed him about the “sensible and positive nature” of the union’s proposals. Dr. Godahewa highlighted that unions’ proposals were aligned with the President’s pre-poll Vistas of Prosperity and Splendour policy statement.

“We want everyone to not misunderstand and interpret our position as being against foreign investment in other development projects. On the ECT issue, we are very clear that it should be developed by our Government.”

Dr. Godahewa told The Island daily that as per the original Asian Development Bank’s proposal, the government was to develop the ECT on its own. However in May 2019, the previous government had agreed to let India and Japan participate in it albeit as minority stakeholders. Dr. Godahewa said that the government could engage those (foreign investors) interested in investing in the proposed West Container Terminal and added that President Gotabaya and the trade unions were on the same page as regards that.

According to Shipping expert and CEO of Shippers’ Academy, Rohan Maskarola, it makes no sense to prevent India or any other country from participating in the development of the ECT while inviting foreign entities to build the West Container Terminal, if keeping national assets in Sri Lankan hands is the goal.

Maskarola also pointed out that it would take a minimum of 18 to 20 months to build a container terminal from scratch (as in the case of the West Terminal). But the partially completed ECT can be made fully functional in a shorter period.

While no work has been done on the West Terminal, the Indian firm Adanis have already ordered equipment for the ECT in the expectation that it would be one of the stakeholders in that terminal.

In the meanwhile congestion in Colombo port is mounting and will mount, Maskarola warned. Already many vessels are by-passing Colombo.

Shipping experts also point out that the unions which are so vociferous in opposing Indian involvement in the ECT (though the Indian stake would be only 15% as per the original plan), they observed stony silence when the government gave a Chinese company 85% stake in the CICT and handed over Hambantota port to a Chinese company on a 99 year lease.

The trilateral MOC signed by Sri Lanka, India and Japan said that based upon the discussions held respectively between Prime Minister Narendra Modi and President Maithripala Sirisena in Delhi on 11 March 2018, and between Prime Minister Shinzo Abe and President Maithripala Sirisena in Tokyo on 14 March 2018, the Governments of India, Japan and Sri Lanka collectively (‘the three Governments’) confirmed their commitment to cooperate as follows:-

The three Governments share the view that it is of great geo-strategic importance for India and Japan to be stakeholders in the operation of the East Container Terminal (hereinafter referred to as ECT) located in the Colombo South Port. Considering the long-standing goodwill and cooperation among the three Governments, the Government of Sri Lanka invites Indian participants concerned and Japanese participants concerned to take a 49% stake collectively in the Terminal Operations Company (hereinafter referred to as TOC) that will be set up with the exclusive and explicit purpose of providing the equipment and systems necessary for the development of the ECT and managing the ECT for long periods.

The stake of 51% of the TOC belongs to the Government of Sri Lanka under the Sri Lanka Ports Authority (SLPA).

The Government of Japan will endeavor to sign the Exchange of Notes to provide the Yen loan under highly concessional conditions to the Government of Sri Lanka at the earliest possible date to enable faster capacity expansion at the ECT through the participation of Japanese companies, which could cover payments made by the SLPA prior to the provision of the said loan for quick placement of ship to shore cranes and rubber-tyre gantry cranes.

Soon after the signing of the MOC, opposition arose from the leftist Janata Vimukthi Peramuna (JVP), Buddhist monks, and assortment of nationalists against handing over the port to India and Japan both of which were in alliance with the US.

The US is looked upon in Sri Lanka as an overbearing and invasive power highlighting alleged war crimes in the UN Human Rights Council (UNHRC) to the detriment of Sri Lanka.

Although the campaign was sometimes couched in general nationalistic terms without mentioning India, the target was India. 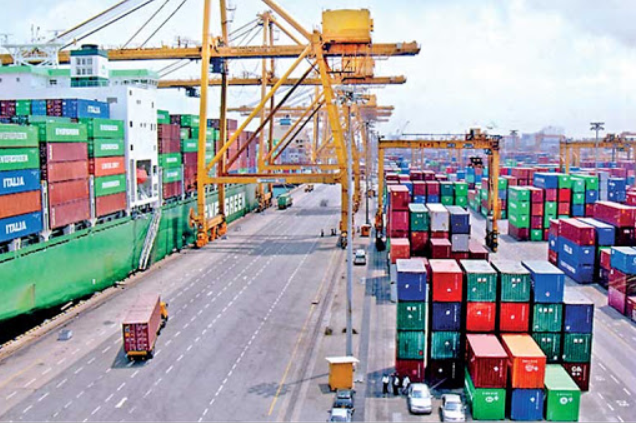