COLOMBO: Indian Foreign Minister S.Jaishankar’s current foray into the Maldives is meant to further enhance India-Maldives economic ties which have been growing exponentially since the exit of the pro-China Abdullah Yameen regime in 2018.

According to a Maldivian government spokesman Miuvan, Jaishankar would oversee the signing of a number of MoUs and symbolically hand over 100,000 COVIDSHIELD vaccines during his two- day sojourn.

The MoUs would be on: the Second Amendatory Dollar Credit Line Agreement; the Geydhoshu Fish processing plant in N. Kendhikulhudhoo; Cooperation in the Field of Sustainable Urban Development; Cooperation and Collaboration in Broadcasting; and the Letter of Intent between the Fahi Dhiriulhun Corporation and the Export-Import Bank of India.

Earlier, India had given a credit line of US$ 800 million for seven projects such as: Development of an international port at Gulhifalhu; Establishment of water supply and sewerage networks across 34 islands spanning 16 atolls; Development of roads and storm water drainage along with reclamation works in Addu atoll in southern Maldives.

Last August, India had offered an EXIM bank credit of US$ 400 million, for the Greater Male Connectivity Project (GMCP). India had also committed a US$ 100 million grant for the same. The GMCP is expected to overshadow the Maldives-China Friendship Bridge between Male and Hulumale as the most visible infrastructure project in the Maldives. The GMCP is meant to showcase India’s expertise in conceptualizing and implementing a complex infrastructural project of this scale.

Last September, India established a cargo ferry service between Male and Tuticorin and Cochin in India. Referring to this service, Hamid Ghafoor, the former International Spokesman of the ruling Maldivian Democratic Party (MDP), said that it has made Indian goods cheaper in the Maldivian market. The Maldives imports a lot of goods from India.

In addition, India will aid the construction of ports in North, Central and South Maldives and with cargo ferry services between them to benefit the common man. According to Ghafoor, the GMCP would be more meaningful than the Male-Hulumale bridge built by the Chinese because it will connect Male with three other islands, Villingili, Thilafushi and Gulhifahu over 6.7 km of sea, taking much of the pressure off the main capital island of Male for commercial and residential purposes.

India-assisted projects in the region include water and sewerage projects on 34 islands, a reclamation project for the Addu island, a port in Gulhifalhu, airport redevelopment at Hanimaadhoo, and a hospital and a cricket stadium in Hulhumale.

After the defeat of the pro-China President Abdullah Yameen in the 2018 Presidential election, India had entered Maldivian economic development with a bang, committing loans and grants totaling over US$2 billion for infrastructure projects. India had also extended budget support amounting to US$ 250 million.

Comparing Indian aid with China’s, Maldives parliament Speaker Mohammad Nasheed had once tweeted that the “super low cost assistance” announced by India came in sharp contrast to the “eye-wateringly expensive commercial loans that leaves the nation mired in debt”. The Chinese loans totaled US$ 1.4 billion which was 53% of the country’s total debt.

An Indian Ocean archipelago of 1,192 coral islands, the Maldives’ geographic location near major sea lanes, including the East-West shipping route for oil, gives it immense strategic significance. It has, therefore, drawn the attention of India and China besides the US.

Historically, the Maldives had been in the Indian sphere of influence. But the situation changed radically when Abdulla Yameen became President in 2013 and hitched his country to emerging China. He virtually delinked it from India though he continued to receive Indian aid.

While the opposition MDP depended on India and the West to challenge Yameen’s dictatorial regime, Yameen depended more and more on China giving the latter more and more projects and running up a huge debt in the bargain.

India wondered if the Maldives, like Sri Lanka, would hand over strategic assets like ports to the Chinese as the Chinese could take over such assets if the host country was unable to pay back the borrowed money.

Given the intense international campaign waged by the MDP chief and former President Mohammad Nasheed, the Yameen regime was named and shamed internationally for its arbitrary, corrupt and dictatorial ways. Yameen’s stock within his own country fell because of this and he was defeated by Ibrahim Solih of the MDP at the end of 2018 poll.

However, the change of regime did not quite mean exclusion of China from the Indian Ocean archipelago. The Ibrahim Solih Presidency has adopted a pragmatic policy of accepting aid from all. The criteria for acceptance and rejection of foreign aid is now based on rational and nationalistic calculations rather than preconceived notions and biases, which was the case when Yameen was in power. In effect, what has happened is a course correction to achieve a balance between China and India so that the Maldives gets the best of both the worlds.

On January 26 this year, the Chinese Vice Foreign Minister Luo Zhaohui co-hosted the 7th round of China-Maldives diplomatic consultations with the Maldivian Minister of State for Foreign Affairs Ahmed Khaleel via video link.

Luo Zhaohui said that both sides would need to attend to poverty alleviation, food security and public health and help post-pandemic economic recovery by facilitating the resumption of work and production in the Belt and Road cooperation projects, promote the early entry into force of the China-Maldives free trade agreement, and explore the resumption of tourism cooperation after the pandemic.

Maldivian Minister Ahmed Khaleel said that his government attaches great importance to its relations with China, firmly supports the one-China principle, and considers the relationship with China as one of the most important bilateral relations.

“Maldives is grateful for China's invaluable support to Maldives's fight against the pandemic and its economic and social development, and looks forward to carrying out vaccine cooperation with China, discussing the resumption of direct commercial flights between the two countries and tourism cooperation, and pushing forward bilateral relations.

Maldives highly appreciates China's firm defense of multilateralism and economic globalization and stands ready to enhance multilateral communication and coordination with China and cooperate with China in climate change and other fields,” Khaleel said.

However, given the MDP's commitment to democracy and its debt to the democratic world, the government in Male is expected to be more accommodative to India and the West than to China. Furthermore, as Hamid Ghafoor pointed out, Yameen made the grievous mistake of latching on to distant China and ignoring India while sitting in the middle of the Indian Ocean. 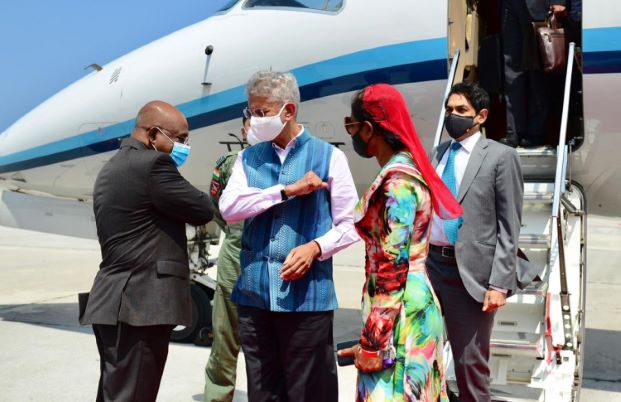