COLOMBO: The two-day visit of Pakistan Prime Minister Imran Khan to Sri Lankahas put Pakistan-Sri Lanka relations on a new plane. While the traditional defense and security ties will be enhanced, the relationship may acquire a noticeable economic content.

Imran Khan’s intercession on the issue of the burial of the COVID-19 dead, might result in government’s lifting the ban on it, thus bringing the curtains down on the bitter conflict between the State and the Muslims, for whom burial is a mandated Islamic practice.

It is clear that from now on, Pakistan-Sri Lanka relations will have a major trade and investment component as both countries have pledged to increase two-way trade from the current US$ 460 million to US$ 1 billion. For the first time, Sri Lanka has been invited to join the China-funded China-Pakistan Economic Corridor (CPEC) to reach out to growing markets in Central Asia.

The China-factor in this matter was evident when Imran descried CPEC as the “flagship of the Belt and Road Initiative”, President Xi Jinping’s pet scheme with a global reach.

Of course, security will remain a key element in the relationship as in the past. But that too will be enhanced by a Pakistani credit line of US$ 50 million for Sri Lanka’s defense projects. The two sides have agreed to cooperate on tackling a common enemy - terrorism and religious extremism.

In April 2019 Lankan suicide bombers inspired by the Islamic State (IS) had killed 277 innocent people, and Pakistan has so far lost 70,000 lives in terrorist attacks carried out by Islamic bigots.

The Joint Communique “stressed the need for stronger partnership for supporting and coordinating with each other in dealing with matters related to security, terrorism, organized crime and drug and narcotic trafficking as well as intelligence-sharing.”

On the issue of the burial of Muslims who had died of COVID-19, Khan had told a group of Muslim MPs who met him prior to his departure, that he had taken up the matter with Prime Minister Mahinda Rajapaksa and President Gotabaya Rajapaksa and had secured “a positive response”.

Significantly, there is an oblique reference to this in the Joint Communique which said: “Both sides underlined the importance of inter-religious dialogue and harmony as a key to promote cultural diversity, peaceful coexistence and mutual empathy.”

Media reports said that later on Wednesday, Prime Minister Mahinda Rajapaksa told Buddhist monks that there was pressure from different quarters to rescind the ban on burial and that the monks said that if the technical experts agreed to allow burial they would have no objection.

Given the dire need for the support of Pakistan and the Organization of Islamic Cooperation (OIC) in the UN Human Rights Council (UNHRC) to face a resolution against Sri Lanka in March, it has become necessary to accommodate the Muslims’ demand. The OIC had in fact openly asked for the lifting the ban. Reports suggest that the ban will be lifted shortly.

Khan was able to reaffirm, for Pakistan, the goodwill of the regime of the Rajapaksas. Prime Minister Mahinda Rajapaksa described Pakistan as a “close and genuine friend.” And Imran Khan, on his part, announced a credit line of US$ 50 million for Sri Lanka’s defense projects. He extended a grant of US$ 327,916 (PKR 52 million) for a modern sports facility in Sri Lanka to be named “Imran Khan High Performance Sports Center”.

Other goodies were: 100 scholarships for undergraduate medical students; sponsorship of an Asian Civilization and Culture Centre at the University of Peradeniya in Kandy, Sri Lanka’s cultural capital and encouragement to make use of the “Buddhist Trail” that Pakistan will be putting in place to attract Buddhist pilgrims to ancient Buddhist sites in the Gandhara region now called Khyber Pakhtunkhwa.

This will enable Pakistan to showcase its achievements in saving these monuments and idols from religious bigots and idol thieves and win plaudits from Buddhists in Sri Lanka and other Buddhist countries.

Significantly, Khan invited Sri Lanka to take advantage of the China-funded China Pakistan Economic Corridor (CPEC) running right down his country from the Karakoram range in the North to the Arabian Sea in the South.

He described CPEC as the “flagship project’ of China’s Belt and Road Initiative (BRI). Sri Lanka has ports, an airport, and the up and coming Colombo Port City which China considers part of its BRI, though the Sri Lankan government is yet to portray them as such.

But Sri Lanka is well disposed towards the BRI though it has not formally joined it. Foreign Secretary Adm.Prof.Jayanath Colombo had recently said that the BRI provides opportunities to Sri Lanka to grow its international trade and get foreign direct investments.

CPEC could also play a role in realizing the joint Lanka-Pakistan aim of taking bilateral trade from the current low of US$ 460 million to US$ 1 billion.

Other significant outcomes are: a decision to forge relations between parliamentarians of the two countries who are both law makers and opinion makers. A decision to set up mechanisms for frequent inter-governmental consultations was also taken.

The two sides noted the existence of close cooperation between them in regional and international forums on issues of mutual interest, and agreed to further strengthen a coordinated approach on such matters.

Lankan Prime Minister Mahinda Rajapaksa thanked the government and the people of Pakistan for the constant support extended by Pakistan to safeguard the independence, sovereignty and territorial integrity of Sri Lanka.

Such support has great significance now in the context of the possibility of Sri Lanka’s facing at the UNHRC, a hostile resolution on its alleged failure to atone for “war crimes” in its fight against Tamil Tiger terrorism.

However, Khan had one disappointment during his trip – the Lankan government’s backing out of a commitment to let him address parliament. He was denied the chance to be the third Pakistani dignitary to address the Lankan parliament after Gen. Ayub Khan in 1963 and Zulfikar Ali Bhutto in 1975.

Having got wind of the fact that his plan to speak in parliament was thwarted because the Lankan government feared that he might raise the Kashmir issue (a hobby horse of Pakistani politicians) and raise the hackles in New Delhi, Imran chose not to embarrass his hosts by insisting on the item being on the agenda.

Imran Khan did mention Kashmir in a trade and investment conference in Colombo. Kashmir is the only dispute between India and Pakistan, he said, adding that it can only be resolved through dialogue, GEO news of Pakistan reported.

Khan said he offered the Indian government a chance to holds peace talks with Pakistan after getting elected but nothing came out of it. “We want to resolve all disputes in the subcontinent through dialogue.”

Officially, his address to the parliament was cancelled ostensibly because the Speaker had written to the government saying that, in view of the COVID 19 pandemic, he might not be able to ensure full attendance of MPs. But few took this excuse seriously. 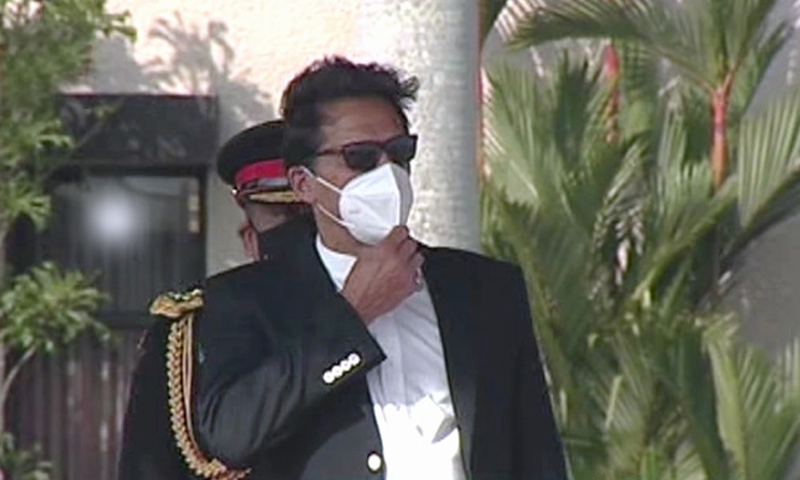