Protests not just about Suu Kyi

BANGKOK: Myanmar activists have called on the international community for help as security forces loyal to the military continue their draconian sweep against the civil disobedience campaign that has brought the country to a standstill since the Feb. 1 coup. The pleas come as analysts, commentators and diplomats who know Myanmar fear that more bloodshed is almost inevitable.

This comes in the wake of the bloodiest day of protests on Feb. 28 after police and security forces fired live ammunition into crowds of protestors in Yangon, Dawei, Mandalay, Myeik, Bago and Pokokku.

According the United Nations human rights office, 18 people were killed and over 30 wounded. Local rights’ groups, however, believe the figure is much higher.

Several eye-witnesses have told IPS that police are invading houses, breaking down fences, doors and windows – whatever stands in their way – to conduct searches and carry out indiscriminate arrests without a warrant. Soon after the Feb. 1 coup, military leaders changed the law to allow unrestricted search and arrest, as well as indefinite detention.

“It’s a total war zone,” Walter Khun, a Myanmar citizen and founding partner with financial advisors based in Yangon, told IPS. “Our associates throughout the country are reporting the same: junta troops terrorising civilians.”

Over the past two days there have been scores of reports of police systematically looting shops and homes, stealing food from markets and commandeering possessions from private homes.

“They’re turning the country into a massive battlefield,” Zaw Naing, a local Myanmar businessman, told IPS. His statement was echoed by many other sources with whom IPS spoke.

Increased troops and police are being deployed across Myanmar, with convoys of soldiers and sailors being sent in as reinforcements to the strategic towns of Mandalay, Mawlamyine, Monywar, Taunggyi and Dawei.

Ruthless police charges with rifles have been filmed and posted on Facebook. In Kalaymyo – in the Sagaing region north of Mandalay – citizens managed to push advancing police with riot shields and a water cannon back. Skirmishes have also be reported in Mandalay and elsewhere.

Today March 2, the sound of gunfire was heard irregularly throughout the city of Yangon. Eye-witnesses were unable to distinguish whether it was live ammunition or rubber bullets.

In Sanchuang, in the northern-central part of the city, security forces conducted training exercises on the footpaths with snipers lying on the ground and taking aim with their rifles. Videos of the incident flooded Facebook and other social media outlets.

Security forces have also erected barricades and blockades at strategic roads and thoroughfares to prevent the protestors fleeing from one part of the city to another. As of today, Mar. 2, authorities have ordered all of Yangon’s major shopping centres, including Junction Square, Capital Retail Myanmar and Myanmar Plaza to close indefinitely.

Many big supermarkets are also closed. Some believe this is part of the security forces control and dispersal strategy to prevent protestors taking refuge inside shopping complexes when the police charge.

“Protestors are being shot. We are very angry, we are very upset,” Ma Myint, a 30-year-old young communications graduate from north of Yangon, told IPS. “How many dead bodies does the UN need to act?” she asked after Sunday’s deaths.

Reuters reported that today, Mar. 2, that the Association of Southeast Asian Nations held discussions with the military, urging them to release civilian leader Aung San Suu Kyi and leaders from her National League for Democracy (NLD).

“The UN is watching, the US is watching, the whole world is watching but when will they act? We need international intervention based on the ‘right to protect,’” young professional, Thiri Kyaw Nyo, told IPS. “The must act otherwise there will be more bloodshed in the coming weeks.”

Dr Sa Sa, Myanmar’s Special Envoy to the UN – who represents the elected MPs — called on the international community to bring the authorities to justice for “crimes against humanity”.

“It’s time for the international community to act to protect our innocent, defenceless people who dare to stand up to these thugs who now controlling our country,” Dr Sa Sa told IPS in an extensive interview.

According to military sources the security forces standing orders and rules of engagement are to respond if attacked and the use of lethal force is permitted.

Regional military analysts believe the security forces have been relatively restrained compared to their past practices, including the crushing of the 1988 democratic uprising. The fear is the closer it gets to Mar. 27, Armed Forces Day – the anniversary celebrations for the military — the more they will not tolerate the continued civil disobedience campaign and protests in the street. Some analysts expect the army to deploy its full military might against the protests before then.

The military have been progressively ratcheting up their response – highlighted by Sunday’s tragic events.

Sa Sa vowed the protests would continue despite the security forces crackdown.

“We must continue to remind the army that we are not giving up, we are not going away, and we will continue to frustrate their efforts to run the country at every turn,” said Sa Sa.

The protest movement is having a dire effect on the junta’s ability to rule. Banks are closed, government offices empty and the country’s fuel supplies are running dangerously low. Hospitals, universities and schools are mostly closed, and most factories have also been idle for the last four months.

Myanmar is virtually at a standstill.

But Sa Sa insisted the protests must remain non-violent. “We are a non-violent movement, our weapons are our voice, our mobile phones and social media,” Sa Sa said.

“It’s the army that are committing crimes.

“These are the ones who facing real criminal charges and international justice at the Hague [at the International Court of Justice], they are the ones who should be in prison … not our leaders [referring to Suu Kyi and other NLD leaders] … they must be made accountable for their crimes.”

Suu Kyi appeared in court on Feb. 16 on charges of violating import restrictions after walkie-talkies and other foreign equipment were found in her villa compound. She and other senior leaders, as well as human rights activists have been detained under house arrest since the coup.

On the surface the protests seem to be leaderless and an expression of aspirations of the young – most of the protestors are under the age of 30.

But the civil disobedience movement encompasses more than the street campaigners.

While the movement is largely galvanised around releasing Suu Kyi, and a call for the military to abide by the election results of the November polls that saw Suu Kyi’s NLD convincingly win the majority vote, the campaign is much broader.

Myanmar’s civil servants — the doctors, nurses and health workers who initiated the civil disobedience campaign four weeks ago — are still on strike despite the junta’s threats and intimidation, according to a young doctor heavily involved in the movement in Mandalay.

The doctor, who did not want to be named, told IPS: “They are serious about protecting democracy, and have vowed not to stop till the coup commander is defeated and the culture of coups eradicated forever.”

Myo Win, activist and executive director at Smile Education and Development Foundation, told IPS: “It’s much broader: it’s about completing the transition to democracy, ripping up the 2008 constitution and replacing it with a democratic, federal state, and ending military dictatorships forever.”

The 2008 constitution allows for the military commander-in-chief to take power in extreme cases.

Meanwhile, local community neighbourhood watch teams have cordoned off areas in Yangon’s townships, built their own makeshift barriers and mounted 24-hour guard, to prevent the police venturing into their townships and impeding their advance charges.

“It’s a ‘cat and mouse’ game between the security forces and the protestors,” said one of the 1988 protests veterans who is involved in organising logistics — communicating over walkie talkies with protestors.

At street corners in Yangon, protestors are reportedly keeping watch and warning others when police enter nearby streets. Upon alert, many take refuge to wait until the police pass before reemerging, singing songs and shouting.

“They’re organised in small groups of protestors throughout the city and are keeping the revolutionary flame alive,” Nyein Chan Aung, a veteran activist from the 1988 protests, told IPS.

The campaigners are determined to continue irrespective of what the security forces throw at them.

“This is about our future,” said Ma Myint. “Our future is being taken away from us … we feel like that: we do not want to go back to the darkness. We were looking forward to a brighter future, now suddenly it’s gone dark.” 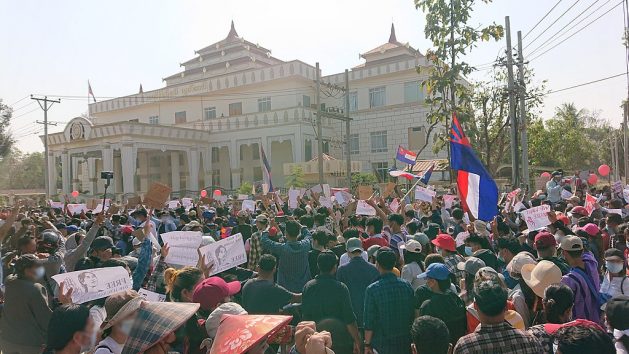