India-Bangladesh relations have seen ups and downs in the past 50 years. Since Sheikh Hasina became Bangladesh Prime Minister in 2008, relations have stabilized. New Delhi has taken in its stride, Dhaka’s growing economic relations with Beijing through the latter’s Belt and Road Initiative (BRI).

On her part, Sheikh Hasina has curbed the activities of anti-India and anti-Hindu Islamic radicals and terrorists and has completely stopped sheltering Assamese separatists. India’s failure to deliver on the Teesta river waters sharing issue continues to irk Dhaka, but it appears to have put it on the backburner.

Indian Prime Minister Narendra Modi’s two-day visit to Bangladesh, which concluded on Saturday, was a high water mark in bilateral ties in recent times. Modi conferred the Gandhi Peace Prize on Bangladesh’s founder, Sheikh Mujibur Rahman, paid homage at the latter’s grave in his native village Tongipura, and gifted 1.2 million doses of the India-made COVID-19 vaccine to Bangladesh in addition to 3.2 million doses already gifted. He also gifted 109 Life support Ambulances. Cooperation in the educational and connectivity fields is set to expand.

The Bangladeshi mainstream media, generally critical of India and the Bharatiya Janata Party (BJP) over its anti-Muslim Citizenship Amendment Act and the National Register of Citizens, had no adverse remarks to make during the visit, though social media carried criticisms.

However, the emergence of religion-based communal politics in West Bengal and Bangladesh could turn out to be spoilers.

In Bangladesh, militant Islamic communalism had been dormant due to firm action taken by the Hasina government in the 2016 Holey Artisan Bakery massacre case. But now there are signs of a re-emergence of Islamic groups. Protesting against the presence of Narendra Modi in the independence day celebrations, the Hefazat-e-Islam protested in Dhaka, Chittagong and Brahmanbaria which resulted in five deaths in police firing.

According to the Rapid Action Battalion (RAB) many leaders and activists of different banned militant outfits like the Hizbut Tahrir, JMB, Ansarullah Bangla Team and Harkatul Jihad have resurfaced.

In areas like Shegunbagicha, Purana Paltan, Malibagh, Mouchak in Dhaka, these outfits have put up posters urging the Muslim Ummah to establish an Islamic Caliphate. They plan a month-long propaganda campaign for the establishment of a Caliphate.

The Hefazat-e-Islam has an on-going anti-Bangabandhu statue campaign which led to the burning of 80 Hindu houses in Sunamganj in Sylhet district. Earlier, the Hefazat made Sheikh Hasina to remove a statue of Justice in front of the Supreme Court, featuring a lady clad in a white sari holding the scale of justice. Hasina herself said the depiction was inappropriate. Hefazat was her ally then. The link broke after the death of its aged Supremo.

Although some see a Pakistani hand in the revival of militant Islam, many commentators like Brigadier General Shahedul Anam Khan, say that the real reason is the shrinking space for dissent in Hasina’s Bangladesh.

Although Hasina is the driving force behind Bangladesh’s remarkable economic growth and a feeling of general wellbeing among the public, she and her party activists have been intolerant of dissent. Many critics have been made to disappear and many bashed up. The Digital Security Act, meant to stamp out cybercrime has been used to quell dissent.

General Anam Khan points out that Bangladesh has slipped one position in the World Press Freedom Index to 146. “While it has climbed four notches in the democracy index, there is little to celebrate on that account because Bangladesh is still classified in the "hybrid regime" category, which means that substantial irregularities often prevent the elections from being free and fair, according to a report by the research and analysis division of the Economist Group,” he says in The Daily Star.

More than 1,000 cases have been filed in Bangladesh under the Digital Security Act since it was implemented in 2018. Bangladeshi human rights monitor Odhikar claims that the Digital Security Act is mostly being used by businessmen and politicians for targeting critics. 550 people have disappeared in the country since the Awami League government was sworn in 11 years ago.

There is no legitimate political opposition in Bangladesh. The Bangladesh Nationalist Party (BNP) is in tatters partly due to the prolonged incarceration of its leader Begum Khaled Zia on corruption charges and partly due to its boycott of the last parliamentary elections.

General Khan says that the gap is being filled by religious groups which do not claim to be political organizations, but nonetheless command the support and influence of a large segment of the people in this country. They offer opinions and take positions on national issues that go down well with some sections of society.

He further says that despite claims to the contrary, courting these groups by the political parties and hobnobbing with them to curry their support (since they command large vote banks) is a common political strategy. Compromising with these elements has become a part of the policy for ensuring political success.

The emergence of the Hindu right wing in West Bengal and Assam could be another spoiler. The BJP is set to come to power in Assam, where anti-Muslim feelings have already been whipped up by the ruling party and before that, by the Assam Movement against alleged illegal immigrants from Muslim Bangladesh.

The BJP manifesto for the current elections in Assam, has promised laws against both “Love Jihad” and “Land Jihad” (alleged land grabbing by Muslim immigrants). Assam has been the epicenter of the anti-Muslim National Register of Citizens and the Citizenship Amendment Act.

If the BJP comes to power in West Bengal or even comes second in the on-going electoral race, the politics of the State will be marked by Hindutvic impulses which could impact on the Muslim minority in the State and Muslim-majority Bangladesh.

West Bengal has become communally sensitive, especially since the decline of the Left movement and the emergence of the Trinamool Congress as the ruling party in 2011. In 2013, under the stewardship of Chief Minister Mamata Banerjee, there were 106 instances of communal violence in West Bengal compared to the previous years which had an average of 15-20 each year.

In December 2016, in Dhulagarh in Howrah district, Muslims were not able to hold the Mawlid procession and a riot had broken out causing destruction of Muslims’ property. In May 2020, in Telinipara in Hooghly district, use of a public toilet by a suspected Muslim COVID patient led to a mob attack on all Muslims. As in Dhulagarh, no politician of any party, intervened to aid the Muslim victims.

Regrouping Islamic radicals in Bangladesh and rising communalism in West Bengal and Assam could prove to be an explosive mixture which could derail the current determined bid to improve India-Bangla relations. The need of the hour is to check this pernicious tendency quickly and firmly. 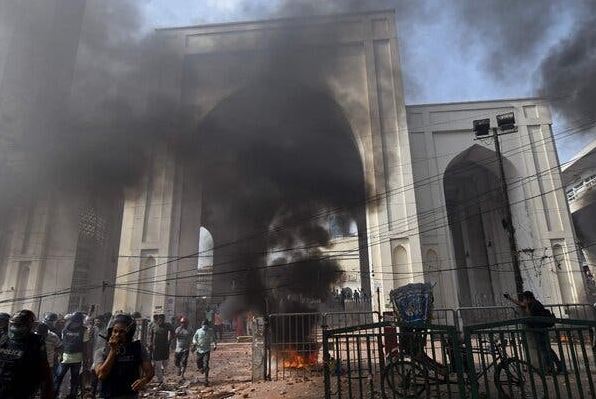