Syria - No Respite From Death, Destruction, Dread and Despair

UNITED NATIONS: The conflict in Syria is now ten years old. A decade of death, destruction, displacement, disease, dread and despair. I have spoken to Syrians in many parts of the country in recent weeks.

They see no respite. And they are right: our latest humanitarian overview, which my office released last week, shows that needs are higher than ever.

We estimate that 13.4 million people across all parts of Syria require humanitarian aid. Twenty per cent more than last year. The deep economic decay from a decade of war has deepened further over the last year, not least as a result of the pandemic.

The Syrian pound fell to its lowest point ever against the dollar this month. Because food is imported, one consequence of that is that food prices are at unprecedented levels.

UNICEF Executive Director Henrietta Fore will tell you more about that.

Several doctors, in different parts of Syria, have told me they are seeing many cases of malnutrition, even among breastfed children, and that the situation is getting worse.

A displaced father of 11 children told me the other day that they have all dropped out of school to look for work to help feed the family.

Just over a week ago, at least 30 communities in northern Syria were attacked by artillery shells and air strikes.

Two boys, cousins, 10 and 12 years old, were among the patients killed. Five medical staff are among the injured. Two of them remain in critical condition.

Al Atareb Surgical Hospital, like many others, was built underground to escape attacks like this. It seems grotesque that hospitals, which are protected under international humanitarian law, should have to operate underground, but that is the reality in Syria.

The location of the hospital was well known to the warring parties. The UN has supported it for several years. Its location was reported again to the parties on 1 March. This was obviously a deliberate attack, and you will all have seen the statement the Secretary-General issued.

As we speak, I am also, just in the last few minutes, hearing reports of a new air strike today in the area around Idleb city.

Moving on, I have expressed my concern to you before about increasing insecurity at the Al Hol camp. An MSF staff member there was killed while off-duty in their tent on 24 February.

Insecurity at Al Hol has now reached intolerable levels, threatening our ability to operate. Forty-one residents have been murdered since the beginning of the year.

The exercise has forced the suspension of many humanitarian services. Residents, including children, are being screened and their tents are being searched.

Security must be provided in a manner that does not endanger residents or violate their rights, and that does not restrict humanitarian access.

There are almost 40,000 foreign and Syrian children at Al Hol. More than 30,000 of them are less than 12 years old. It is entirely unacceptable that they remain in this unsafe environment. Countries of origin should take their nationals home.

Around 1,000 trucks of UN assistance cross through Bab al-Hawa every month, as authorized by the Security Council under resolution 2533.

One of the missiles struck a lot where trucks used for transporting humanitarian supplies were parked. Twenty-four trucks were destroyed or damaged.

The air strikes also started a fire in a nearby NGO warehouse storing food and other humanitarian supplies. A quarter of the stocks there, amounting to aid for over 4,000 people, were destroyed.

To put the impact of an attack like this into perspective, let me outline the extent to which people in north-west Syria depend upon cross-border aid.

There are apparently some misconceptions over the scale of the UN’s role. In one of your meetings earlier this year, it was suggested that the UN cross-border operation accounts for 10 per cent of the assistance. I was recently asked about that informally, and I said I thought the number was in fact around 40 per cent. When I reported that conversation to my staff, they said I had got the number wrong. “So it’s not 40 per cent?” I said. “No,” they said. “Well what is it then?” I said. “We think its’s nearer 50 per cent,” they said.

There are more than 4 million people in north-west Syria. We estimate that more than 75 per cent of them depend on aid to meet their basic needs. The cross-border operation reaches almost 85 per cent of these people every month.

The proportions vary depending on the type of assistance. For example, the UN provides the vast majority of emergency food assistance. Between 70 and 80 per cent of that is delivered by the World Food Programme.

The UN also, though, plays a major role in supporting others providing assistance. Many NGO operations rely, for example, on the UN for support in logistics, financing and procurement.

The UN cross-border operation is one of the most heavily scrutinized and monitored aid operations in the world. That is because the people paying for it – who are mostly Western and Gulf donors – have been clear that they will only do so if they are sure the resources are not being diverted to terrorist groups.

Because this programme is so well monitored and scrutinized, we know aid gets to the people it is supposed to.

Some people have suggested that aid must be being diverted, because otherwise we would not see the kind of malnutrition we now observe. That, too, is wrong. The reason there is so much malnutrition is that the cross-border operation is too small to prevent it. More money and more border crossings would address that.

People in north-west Syria know that the Security Council will shortly be deciding the future of the cross-border programme.

My office last week received a letter from women’s groups in Idleb. It said: “We are 130 Syrian women: teachers, engineers, doctors and housewives. We are all civilians who have lived a full decade in the war in all its detail. As women, mothers and those responsible for our families, we stand against stopping a cross-border resolution. We do not want our children to starve.”

We have also been continuing to try to seek agreement – as we have for more than a year – on cross-line deliveries to the north-west. I updated the Council again on that last month. The various parties have each recently described arrangements that they could go along with. But we have yet to find an approach everyone can agree. Discussions continue. While we deliver 1,000 trucks a month of aid cross border into the north-west, we have yet to see even a single truck, just one, cross line.

We estimate that 1.8 million people require assistance in areas of north-east Syria outside of the control of the Government. Over 70 per cent of them are considered to be in extreme need – well above the national average.

Reputable aid organizations tell us that the availability and accessibility of health care in the north-east is insufficient. Few health issues are adequately addressed due to the limited functionality and capacity of health-care facilities, the lack of adequately trained medical staff, and shortages of essential medicines.

NGOs operating in the north-east report imminent stock-outs of critical medicines like insulin, and cardiovascular and antibacterial medicines in multiple facilities.

The UN was able to support the supply chain of medical supplies through Al Yaroubiya until the Security Council authorization to do that expired. Reputable organizations operating in the north-east tell us that neither cross-line support to health facilities nor increased cross-border shipments by NGOs have since proved a sufficient replacement.

Recent assessments in Deir-ez-Zor and Al Hassakeh show that only half of the pregnant women and new mothers in these camps are able to access obstetric or antenatal care.

Humanitarian organizations are making all efforts to bridge gaps.

The World Health Organization warns, however, that funding is a key constraint, as available resources will only cover 40 per cent of estimated health supply needs for north-east Syria for 2021.

At least nine NGO-supported health facilities will close in the coming months if additional funding is not secured.

Let me finally say a few words about the assistance we are delivering across Syria, in all parts of the country, notwithstanding the complexities and constraints I have just described.

The humanitarian operation currently reaches about 7.7 million people across the country every month. A significant increase in what we were doing last year. That is a reflection of the deterioration of the situation.

On March 30, the UN will be co-hosting the Brussels V Conference in support of Syria and neighbouring countries affected by the crisis.

Humanitarian organizations coordinated by the UN are seeking an estimated US$4.2 billion for the response inside Syria, to reach 12.3 million people in need. Another $5.8 billion is required for support to countries hosting Syrian refugees in the region.

Our ability to deliver aid and stave off an even worse situation for millions of civilians will depend on the political will and financial generosity of the international community, including the countries represented in this Council.

Now is not the moment to reduce humanitarian aid to Syria. We need more money, not less, if we are to avoid a further deterioration – the consequences of which could be dramatic and widespread.

Mark Lowcock, UN Under Secretary-General for Humanitarian Affairs and Emergency Relief Coordinator, in his address to the UN Security Council on the humanitarian situation in Syria, 29 March 2021. 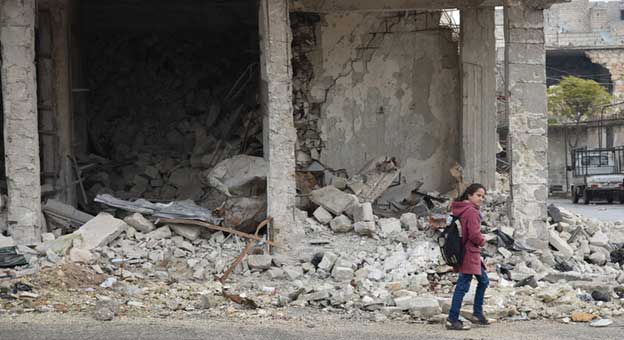