Yemen and its people seem unlikely to get an early respite from the bloody civil war, that has been plaguing the country for the past six years and is mostly seen as a proxy battle between Tehran and Riyadh. According to the United Nations, since 2015, the war had caused over 233,000 deaths, including 131,000 from indirect causes such as lack of food, health services and infrastructure. More than 20 million people were experiencing food insecurity, with 10 million at risk of famine.

The Armed Conflict Location and Event Data Project said the war had killed some 130,000 people, including at least 13,000 civilians slain in targeted attacks. Millions had been pushed towards starvation and tens of thousands of children had died both of starvation and disease.

The United Nations and aid agencies have been focusing on the humanitarian aspects but a recent donor’s conference with over 100 countries and agencies in attendance ended on a dismal note.

The UN had sought aid to the tune of $3.85bn but only $1.7bn was pledged. $191m was pledged by the USA and $430m by Saudi Arabia—both sums less than what was offered last year. Germany however had increased its offer to $241 million as compared to $ 138 earlier. Former American President Donald Trump had slashed $73 million in aid but the Biden administration had restored this amount.

But local aid agencies were worried that a recent report by the United Nations Security Council Panel of Experts could worsen the situation. The key elements of the report were allegations that Yemeni multinational Hayel Saeed Anam (HSA) Group made a profit of about $194m between mid-2018 and August 2020 from the letter of credit mechanism alone and that the Central Bank of Yemen (CBY) had misused Saudi deposits worth nearly $2bn and engaged in money laundering and foreign currency rate manipulation. THE latest reports indicate that The Panel of Experts had been reviewing the sections of the report in question and has recently issued an amendment to the report, advising to disregard sections of the report referencing allegations of corruption and money laundering. Sections of the international media has reported on these developments and the Panel’s review in HSA’s favour.

The report was said to have already disrupted international money wire transfers and caused damage to the reputation of banks that dealt with Yemen’s private sector, making it much harder to import food. UN Secretary-General Antonio Guterres had called it a “death sentence” on the Yemeni people when 400,000 children risked dying of malnutrition.

In the early days of Yemen’s 2011 uprising against then-President Ali Abdullah Saleh, the predominantly Shia Houthis of northern Yemen, backed by Iran aligned themselves with opposition parties. But after Saleh’s ousting from power they established an alliance with Saleh who was later assassinated by them as they had no further use for him. The war effectively started in 2014 when the Houthis seized large swaths of the country, including Sanaa.

They overthrew the internationally recognized government of President Abd-Rabbu Mansour Hadi in late 2014. Fighting escalated significantly in March 2015 when Saudi Arabia and the United Arab Emirates assembled a United States-backed military coalition in an attempt to restore Hadi’s government.

The conflict since then has, in addition to fighting within Yemen, been marked by the Houthis using drones and missiles to target Saudi Arabia’s oil infrastructure and military bases with the Saudi led coalition using air strikes against the Houthis strongholds. Both sides have been receiving arms and assistance from their foreign benefactors—the Houthis from Iran, which continues to deny that it is supplying arms, and the fighters loyal to President Hadi, supported primarily by Saudi Arabia and the UAE.

While the Houthis, who control northern Yemen and the capital Sanaa have been repeatedly accused of obstructing, stealing, and selling aid on the black market, the Saudis too have been accused of weaponizing hunger.

International exhortations for a ceasefire and negotiations have had no impact because the agendas of the two sides are diametrically opposed. The Houthis are determined to capture the whole of Yemen while Saudi Arabia is concerned about the existence of a pro Iran regime on its borders. Riyadh wants a buffer zone inside Yemen along the border while the Houthis want an end to blockades on the Red Sea port of Hodeidah and Sanaa airport.

With President Biden taking office certain developments in the region suggest that the US Administration has been pressurizing both sides to the conflict to come to an early agreement. As of the beginning of this year the Saudi-led coalition controlled Yemen’s airspace and waters, including of the Houthi-held Hodeidah port on the Red Sea which handles more than 70% of Yemen’s imports. The Houthis hold most of northern Yemen, including the capital Sanaa.

While lifting the terrorist group tag placed on the Houthis by Trump, Biden’s administration had imposed sanctions on Mansur Al-Sa’adi, the Houthi naval forces chief of staff, and Ahmad ‘Ali Ahsan al-Hamzi, the commander of Yemen’s Houthi-aligned Yemeni air force and air defense forces accusing them of procuring weapons from Iran and organizing attacks. At the same time President Biden had stopped all direct US military support for Saudi-led offensives leaving the Saudis with the option of countenancing an Iran backed regime on their border or continuing the conflict.

American officials have met the Houthi leaders in Muscat. Oman which had been acting as a mediator in ceasefire talks between Saudi Arabia and the Houthi group, was hopeful of an early agreement between the warring parties. Some Houthi officials, including the group’s chief negotiator Mohammed Abdulsalam, had been living in Muscat since the coalition launched air raids in support of the Hadi government.

U.S. special envoy on Yemen Tim Lenderking recently toured the region to press the warring sides to agree a nationwide truce to revive U.N.-sponsored peace talks on ending the conflict. But making clear the Houthis believed the plan must go further, Chief Houthi negotiator Mohammed Abdulsalam told the media: “We have discussed all these proposals and offered alternatives. We continue to talk.”

Saudi Arabia had unilaterally announced a new ceasefire proposal on March 22, which would see direct UN-backed political negotiations between the Yemeni government and the Houthis for the first time since late 2018. Houthi leaders quickly rejected the proposal, framing it as not serious, and the Saudis hit Houthi-held capital Sanaa with air raids the following night. Houthi spokesman Mohammed Abdulsalam said Saudi Arabia must declare an end to the aggression and lift the blockade completely, but putting forward ideas that had been discussed for over a year was nothing new.

Yemen’s internationally recognised government had rejected Houthi allegations that a blockade had been imposed on the war-torn country. Despite the Saudi offer, the Houthis continued their drone and missile attacks against Saudi Arabia as well as a ground offensive on the gas-producing Yemeni region of Marib, which was the only area in Northern Yemen still under the control of the internationally recognised government of President Abd-Rabbu Mansour Hadi. The escalation of attacks by the Houthis showed their determination to seize Marib.

During the past years Marib province had been spared heavy fighting, allowing local authorities to channel oil and gas revenue into the economy. But that stability had attracted at least 850,000 people displaced from areas gripped by fighting, according to the International Organization of Migration.,” Martin Griffiths the United Nations mediator had told the Security Council recently that the war in Yemen was “back in full force and that there had been a dramatic deterioration with the Houthi offensive on Marib.

There had been indications of instability in both camps. The UAE, Saudi Arabia’s main ally, had announced its decision to withdraw its troops from Yemen in July 2019, following bloody in-fighting between the separatist group it supported, the Southern Transitional Council (STC) and the internationally recognised and Saudi-backed government of President Abd-Rabbu Mansour Hadi.

There continued to be tensions between supporters of the President Abd-Rabbu Mansour Hadi and the separatist Southern Transitional Council, backed by the UAE, despite the inclusion of the Council’s members in a unity government in late December 2020.

In Aden angry protesters had stormed the presidential palace demonstrating the public anger over the lack of services, poor living conditions and depreciation of the local currency. Yemeni and Saudi forces evacuated members of the cabinet, including Prime Minister Maeen Abdulmalik Saeed, to a military building situated near the palace grounds.

Meanwhile there were reports of internal disaffection in the areas controlled by the Houthis. Recently, its second-tier members were said to have been openly criticising the group’s leadership on issues like administrative corruption and the emergence of black markets controlled by pro-Houthi elements. This internal discontent could eventually undermine the authority of the movement’s leadership and leave it more vulnerable to attacks by its adversaries.

The Houthis’ inability or unwillingness to address issues like unemployment, poor healthcare, and rising gas and food prices in the areas they control had begun to turn public opinion against them.

With Marib in the Houthi’s crosshairs, it is unlikely that there would any cessation of hostilities soon. Riyadh would have to respond to the Houthi onslaught which many speculate is at Iran’s behest as the Iranian leadership chafes under sanctions and has yet to get any positive signal of the USA returning to the nuclear deal. Iran had demanded the lifting of all sanctions before any talks take place and upping the ante in Yemen with a cost to Saudi Arabia could very well have figured in Iranian calculations.

But as the Houthi spokesman had said …“The humanitarian side must be separated from the military one,” …“We were asked for a comprehensive ceasefire … but the first stage is to open the sea ports and airports, then go towards the process of a strategic ceasefire, which is stopping the strikes, missiles and drones. “When the sea port and the airport open, we’re ready to negotiate.” Words that suggest that the plight of the people of Yemen is of secondary importance to the Houthis as compared to the objective of controlling the whole of Yemen.

So the proxy war will continue even as diplomatic efforts and pressure tactics are being utilized to make peace less elusive. 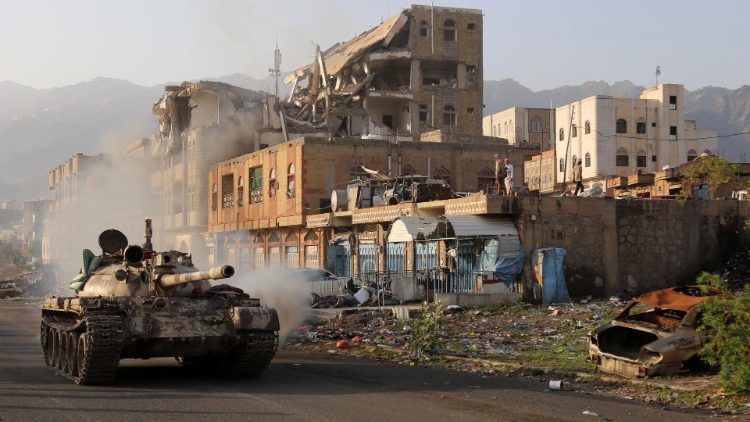