'Where is the money? Climate change is not a business'

What a huge difference a hundred days can make in the life of a nation and the world at large! Till January 19 the United States wasn’t even part of the global discourse on climate change, thanks to the previous president, Donald Trump. His successor Joe Biden joined the Paris Climate Agreement within hours of being sworn in. He has lost no time in assuming leadership of the international effort to address these crises by calling the first Virtual Summit of 40 Leaders on Climate on April 22-23.

The initiative deserves to be applauded; it signals that America is not only back, it is ready to lead. His decision to pay the US’s arrears to the Climate Fund should also be welcomed.

Biden’s high profile Special Envoy on Climate, John Kerry, former Secretary of State is globetrotting (he has visited India and China) and reportedly urging his hosts to announce ”ambitious” Net Zero targets by 2050 before the virtual summit. But he has nothing concrete to offer except vague promises and a simplistic narrative.

His message to China and India, respectively the largest and third largest polluters is simple: you are big polluters, so you must announce big targets; if you don’t, Net Zero by 2050 can’t be achieved. The US can help research new technologies, appeal to businesses with advanced technologies to transfer them, and urge private sector Funds and banks to offer loans to developing countries.

But the devil is in the details. Private tech firms aren’t moved by philanthropic instincts. They would extract competitive prices, and going by the fate of the Climate Fund, one should be very skeptical about the flow of funds out of Pension Funds etc.

And are apprehensions unreal about the economic development plans of developing countries being pushed back by years thanks to the shift from carbon fuels? Kerry’s proposition doesn’t answer that. For the US, it’s America first. Similarly for India, it’s India first!

His arguments sound unconvincing. The atmosphere is impacted by total emissions: it doesn’t distinguish if the bulk of the emission is coming from the developed world or the developing world, or whether some have been polluting for decades and others only for some years, or whether the per capita CO2 emission of some countries is much higher than others. If we want the global temperature not to rise beyond 1.5 degrees centigrade, all of us must commit to Net Zero now!

Biden’s Special Envoy was more candid in his interview with Raj Chengappa of India Today: ”We don’t have enough money going to that challenge of these new technologies. We’re going to try to change that. We don’t have enough joint effort, countries working together. That’s why I’m here, because President Biden wants India and the United States to work together to do the research and hopefully break through on some of these technologies.”

Kerry tried to present the India-US cooperation idea in a more persuasive manner: “We believe that a partnership between the United States and India in an effort to try to accelerate the discovery of the new technologies that we need to deal with the climate crisis, an effort to try to bring finance and help to do things that will accelerate Prime Minister Modi’s very aggressive and important commitment of 450 gigawatts of power over the next ten years from renewable, that’s what we need to do.”

The bottom line of the US approach is: forget the historical responsibility, ignore who is polluting most and at what rate per capita.

Union environment minister Prakash Javadekar wasn’t buying it. At a French Embassy event he said, “We can’t just forget, and we will not allow anybody to forget it. Historical emissions responsibility today is of China 28%, USA 40%, Europe10% and India is only 3%. We are not responsible for the climate change that is happening”.

Javadekar stressed, “Principle of common but differentiated responsibilities (CBDR), a principle under the Paris Agreement which requires richer countries to lead and take historical responsibility for emissions caused in the past is important.”

He tore into Kerry’s promises. “Where is the money? There is no money in sight. You have polluted, destroyed the world, and brought climate change. Now you are saying don’t use coal. The alternative technology has to be cheaper than coal, only then people will do away with coal… they should make technology at an affordable cost. Climate change is not a business.”

Notwithstanding these facts, India can’t afford to be seen as the fall guy when 120 countries have declared Net Zero targets. Navroz Dubash of the Centre for Policy Research suggests that India should declare Net Zero by 2050 as a long term aspirational target, and continue moving vigorously on the renewable energy front hoping to reach the ambitious target of 450 GW renewables by 2030. Former ambassador Chandrashekhar Dasgupta recommends we declare our commitment to reach Net Zero by 2050 now, and pledge our contribution to global efforts in conformity with the principle of CBDR.

Shouldn’t there be a demand for concrete action to meet the nationally determined targets for 2030? While the historical responsibility argument is legitimate, it won’t nudge the discourse towards an agreement. Will there be takers if developed countries are asked to reduce their per capita emissions? That’s not past but present. It’s doable if there is genuine commitment to fighting climate change. It involves introducing lifestyle changes.

Given the enhanced energy requirements for fulfilling the government’s Make in India and Atmanirbhar Bharat goals but not letting our carbon emissions soar, we have no option but to increase the use of renewable energy in India exponentially. And realising that neither new technologies nor funds are likely to come from the developed world in the near future, we must upscale our research on a war footing and come up with carbon capturing and less polluting technologies of our own. After all, we did make our own supercomputer when the US had refused to give one, and most recently a Covid-19 vaccine. We can do it if we push this pursuit passionately.

If we want to reduce the total emissions, which in itself is not enough to limit warming to safe levels, those who contribute more should bring down their share more drastically and much faster.

In spite of serious differences on a number of issues from Xinjiang, Taiwan, Hong Kong to the South China Sea and the ongoing trade war initiated by Trump, the US hopes to bring China to the climate change table. It was the personality and persuasion of Barack Obama that brought both Narendra Modi and Xi Jinping on board the COP16 Paris Agreement. For Biden to do that, he will have to retreat from strident anti-China rhetoric. Besides, the China of 2021 isn’t the China of 2016! 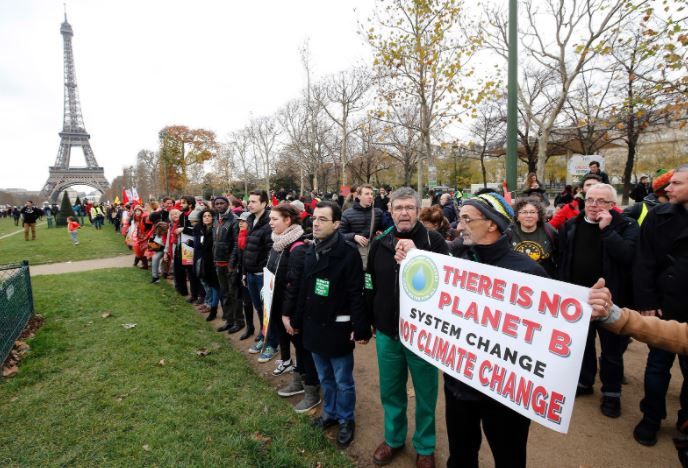