From April 2 (Good Friday) to April 10, there were nonstop violent demonstrations in Northern Ireland, every day with Irish Catholic nationalists (who want to reunify with the Republic of Ireland) and British-Irish loyalists or unionists (who want to remain part of the UK) confronting the police – molotov cocktails and barricades were everywhere. Tensions still remain. Most of the violence is taking place in Belfast, but it has spread to other towns as well, especially in mostly Protestant loyalist places, such as Carrickfergus and Newtonabbey.

Part of it started over the funeral of former Irish Republic Army leader Bobby Storey last year. 24 (mostly catholic) Sinn Fein politicians attended the republican funeral in a huge event in defiance of pandemic-related lockdown measures – Sinn Fein is historically associated with the provisional Irish Republican Army. Many loyalists called for an investigation. Two weeks ago, prosecutors announced no action would be taken against them. Loyalists then interpreted this as evidence that the state gives a kind of preferential treatment to republicans.

This event was a catalyst that brought to surface many grievances and complaints against the police forces in the country. Organised crime gangs such as the South East Antrim UDA and paramilitary groups (that control many working class loyalist neighborhoods) took advantage of the situation to retaliate against police raids and operations targeting their criminal activities.

A lot of it has to do with the post-Brexit situation of Northern Ireland as well, where most people voted against it. The island of Ireland is of course divided into two countries: the Republic of Ireland (independent since 1921, and a member of the European Union) that comprises most of the island, and Northern Ireland, which is part of the United Kingdom.

Although Northern Ireland is part of the UK, the Brexit deal actually left it inside the EU customs unions and single market. This, in a way, “pushes” Northern Ireland away from Britain and pushes the Irish island towards reunification, a scenario feared by loyalists who feel their Britishness is thereby diminished – one has to keep in mind that Northern Ireland was pretty much created to be a kind of “haven” for UK unionists within the island of Ireland otherwise they would become a minority in the Republic of Ireland.

To this day, Northern Ireland remains a very polarised society: about 90 per cent of its youth grew up attending religious segregated schools.

The problem is the UK government had promised Brexit would not create barriers to trade between Northern Ireland and Britain. However, since Brexit, there are checks on food, agricultural and other goods moving between Britain and Northern Ireland (to comply with EU requirements) – and that has been causing many inconveniences. It slows the movement of goods, as a result of which the population has been facing product shortages amid the pandemic.

This is being caused by the arrangement made with the European Union, called the Northern Ireland Protocol. Such a new regulatory “border” between Northern Ireland and the rest of the UK has in fact created a kind of border in the Irish Sea, thereby eroding the very place of Northern Ireland in the UK, loyalists claim.

The complicated situation arose out of the so-called Brexit Trilemma involving the goals of 1) no hard border on the Irish island; 2) no customs border in the Irish Sea; and 3) no British participation in either the European Union Customs Union or the European Single Market.

It is impossible to have all three at the same time. The third item was the whole point of Brexit and returning a hard border within the Irish island would bring back the memories of those years of conflict when the UK–Republic of Ireland border were militarised. So Britain sacrificed the second item.

Thus, while the rest of the UK (that is, Great Britain) left the EU Single Market, Northern Ireland still adopts its regulations on electricity and goods.

When in 1998 the Good Friday Belfast Agreement brought an end to the conflict, the border issue did not arise because both the Republic of Ireland and Northern Ireland were EU members within a Common Travel Area. And so was Britain. The Brexit referendum changed that.

The general feeling amongst loyalists is one of betrayal and abandonment. Northern Ireland Justice Minister Naomi Long explicitly accused Boris Johnson of “dishonesty” over this border issue. Brussels has sued Britain over it, claiming it constitutes a breach of the Brexit agreement.

This is happening at a time when the cause of Irish union is gaining more support throughout the island of Ireland – Sinn Fein has been calling for it – and so the loyalists are reacting. The violence is worrying many leaders in Europe, who have condemned it – including Boris Johnson. On Thursday the Biden administration also voiced its concern regarding the escalation of tensions.

The 1998 Good Friday Agreement was supported by former Democrat President Bill Clinton and so Biden would be following Clinton in taking a conciliatory role. After Brexit, the UK is seeking new free trade deals and the special relationship with the US will tend to grow stronger. An example is Johnson’s keenness on having the UK join the QUAD. Apparently, Britain compromised too much for Brexit, and Northern Ireland unionists now feel abandoned.

The so-called “Irish question” dominated the political life of Britain for two centuries at least and had become a thing of the past – or so many thought. It has come back, apparently.

While much is said about the rise of nationalism and “tribal” and ethnic conflicts in eastern Europe, the violence in Ireland is a reminder that nationalist, ethnic and religious conflicts and separatism are a reality in western Europe too – be it Catalan and Basque separatism in Spain, France’s recent “anti-separatism” bill (widely seen as an Islamophobic measure) or the violence in the UK, the West has no higher moral ground. 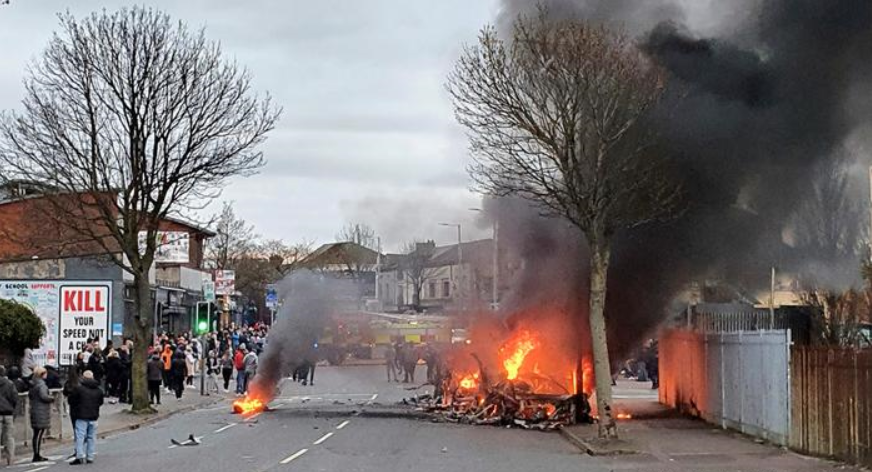