“The Indian prime minister’s overconfidence lies behind the country’s disastrous Covid-19 response.” So begins The Guardian’s editorial on the covid-19 crisis that has engulfed the country. “Political hubris met pandemic reality in India this week. At the beginning of March, the Hindu nationalist government of Narendra Modi claimed the country was in Covid-19’s “endgame”. India is now in a living hell,” the edit reads.

The edit lays the blame for the ongoing crisis squarely on the Prime Minister and his administration. “Like Donald Trump, Mr Modi would not give up campaigning while the pandemic raged. India went ahead with five state elections in April, and an unmasked Mr Modi held huge rallies. Mr Modi’s brand of Indian exceptionalism bred complacency. A presumption of national greatness has led to a lack of preparedness…” it continues. “The Indian prime minister suffers from overconfidence in his own instincts and pooh-poohs expert advice,” the edit adds. “ As with many of the countries hit hardest, India’s death toll was largely avoidable and a result of arrogant and incompetent government,” it says.

As India continues to record over 3 lakh new daily Sars‑CoV‑2 infections, international media has turned the spotlight to the crisis, drawing attention to the grim reality that is the lack of hospital beds and medical supplies in the country.

The Economist details India’s trajectory leading upto the second wave, also pinning the blame for the crisis on the Prime Minister and his administration, stating that Modi’s “slowness” to respond to an “avalanche of grief” had led to the “catastrophic” second wave.

“As avoidable as it is tragic” states an edit by the Washington Post. “The sudden wave came after India relaxed restrictions. Tens of thousands of spectators were allowed to fill stadiums for cricket matches; movie theaters were opened; and the government permitted enormous religious gatherings such as the Kumbh Mela, a festival in which millions of Hindus gathered to bathe in the river Ganges. Also, India went ahead with elections and rallies in four states and one union territory; crowds at election rallies have been ignoring guidelines,” the edit reads.

“If the apocalypse had an image, it would be the hospitals of India,” reads a widely circulated piece by Rana Ayuub in TIME Magazine, pinning the blame for the ongoing covid-19 crisis in the country squarely “at the top.” “Why was India caught unprepared as the second wave ravaged a cross-section of Indian society? The responsibility lies with a strongman regime that has ignored all caution.”

“Complacency and government missteps have helped turned India from a seeming success story into one of the world’s worst-hit places, experts say. And epidemiologists warn that continuing failure in India would have global implications. But politicians in India, still stinging from the pain of the last national lockdown, have mostly avoided major restrictions and have even returned to holding big election rallies, sending mixed messages to the public. India’s vaccine rollout was late and riddled with setbacks, despite the country’s status as a major pharmaceutical manufacturer,” reads an article in the New York Times.

The BBC’s reporters on the ground have filed several stories - from New Delhi’s hospitals and streets.

Reuters reporters on the ground have filed stories from hospitals and crematoriums.” COVID patients die on trolleys outside Delhi hospital,” reads one headline. “Hospitals overrun as India’s COVID-19 infections top global record for second day,” reads another. “Mass cremations begin as India’s capital faces deluge of COVID-19 deaths,” is yet a third - with harrowing photos from Delhi’s crematoriums.

The media attention comes as several countries have cancelled flights from Delhi or issued travel advisories. 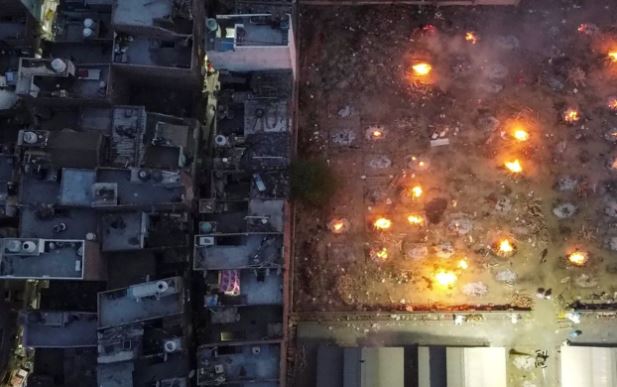 Cover Photo: A mass cremation of victims who died due to the coronavirus disease (COVID-19), is seen at a crematorium ground in New Delhi, India, April 22, 2021. Picture taken with a drone. REUTERS/Danish Siddiqui