COLOMBO: The recent death of 33 year old extremely sick Sri Lankan girl student Wishma Sandamali in a Japanese Immigration Detention Center, allegedly due to callous neglect on the part of the authorities, has highlighted several issues pertaining to human rights in Japan. It has exposed Japan’s underside and opened up the larger issue of human rights in that country.

Specifically, the areas of concern are: the plight of foreigners in Japanese immigration detention camps; the Japanese attitude to foreign immigration; and the overall human rights situation in that country. All three areas need urgent attention and reform if Japan, known to be a modern democracy, is not to be bracketed with human rights violating countries.

Sandamali, who had over-stayed her student visa wanting to work in Japan, was detained in a camp for illegal immigrants in Nagoya in August 2020. While she was fighting her case for release, she complained of sickness, which became progressively worse. She was vomiting whatever she ate and was rapidly losing weight and even the ability to move in her bed. But the authorities declared her a psychiatric case or as one feigning illness to secure release.

When Japanese human rights bodies took up her case, they were blithely told that nothing was wrong with her. She died on March 6, alone in her tiny cell.

According to her two sisters, who travelled to Japan for her funeral, the authorities refused to release video footage of Sandamali in the detention center prior to her death, prompting many to challenge the country’s opaque detention practices, reports said.

Many prisoners in Japan are put in solitary confinement in a small dark room, with one electric light, the switch of that is located outside the cell. Punishments for even minor infringements are harsh. One of the punishments is to look at a given point motionless for a time period set by the warder. During detention, the prisoner has no choice in any matter.

As the Human Rights Watch (HRW) report for 2020 pointed out, Japan has no law prohibiting racial, ethnic or religious discrimination, or discrimination based on sexual orientation or gender identity. Japan has no national human rights institutions.

Anti-death penalty advocates have long raised concerns about death row inmates having inadequate access to legal counsel, being notified of their execution only on the day it takes place, and some being executed after their lawyers filed a request for retrial, HRW pointed out.

Japanese criminal procedure law continues to allow suspects to be detained for up to 23 days prior to prosecution without the possibility of release on bail. It prohibits lawyers from being present during interrogations. Japan’s rape law requires that prosecutors prove that violence or intimidation was involved, or that the victim was “incapable of resistance.”

A major problem in Japan is that immigration rule violators do not want to be deported. They demand asylum, which Japan is totally against giving. Detention follows. Harsh prison conditions are perhaps meant to persuade the inmates to agree to deportation. But about 40% of them are persons who had committed crimes and fear going back.

However, this cannot be an excuse to keep them in detention under inhuman conditions as Prof.Hiroko Akizuki at Asia University said. The length of detention and conditions at detention facilities in Japan have been criticized internationally and there needs to be improvement in regard to human rights, he said. Hunger strikes have taken place and there have been deaths, including suicides.

Japanese are believed to have an atavistic fear of being overwhelmed or swamped by foreigners. Hence the harsh treatment of illegal immigrants or over stayers. Historically, the Japanese have resisted foreign incursions of any kind. The fear is reflected in the very restrictive immigration laws existing now.

Between 1640 and 1853, Japan followed the Sakoku (closed country) or isolationist foreign policy because it wanted to protect itself from Portuguese, Spanish, Dutch and British Christian missionaries who were using class differences in Japanese society to stir revolts against the native rulers. Relations and trade between Japan and other countries were severely limited. Nearly all foreign nationals were barred from entering Japan.

But after Japan opened up in the 1860s, Korean workers were imported. During World War II people from the conquered countries, especially Koreans, were recruited for “dangerous and dirty” jobs. These people were looked down upon and discriminated against. Local governments have carried out campaigns among Japanese employers to persuade them to treat their foreign employees, especially Koreans, respectfully.

Between 1948 and 1996, Japan had the obnoxious Eugenics Protection Law (EPL). After World War II, when Japan struggled to rebuild itself, it sought to prevent people with physical and cognitive disabilities from being able to have children. The sterilization law also targeted lepers and those with mental illness.

Human rights organizations believe that at least 25,000 people were sterilized in the 48 years the law was in existence. It is thought that at least 16,500 of those did not give their consent to sterilization. Sterilization peaked in the 1960s and 1970s, and continued until the last operation was conducted in 1993. The law was finally revoked in 1996.

In 2015, the Shinzo Abe government refused to admit refugees affected by conflicts in the Middle East and Africa. He favored short-term working visas for migrant workers to "work and raise incomes for a limited period of time, and then return home.”

In 2018, the Justice Ministry received 10,493 applications for refugee status, largely by people from Nepal, Sri Lanka, and Cambodia. But the ministry recognized only 42 people as refugees, while another 40 asylum seekers were classified as needing humanitarian assistance, allowing them to stay in Japan. In 2019, authorities granted asylum to less than one percent of applicants.

But a recent survey showed that 70% of Japanese want immigration to be made easier. Japanese women held demonstrations against the ill treatment of refugees. Ageing Japan needs foreign labor to run its economy, which faces a marked labor shortage. According to Financial Times, the Japanese workforce was expected to drop from 65.3 million in 2017 to 52.5 million in 2040, a fall of 22%. The overall population is expected to fall from 126.7 million in 2017 to around 110 million by 2040.

Since, Japan is against recruiting foreigners in large numbers to fill the yawning gap, it is trying to reduce non-nationals in irregular employment categories, while accelerating immigration of skilled workers. However, a revised immigration law was made which allowed more than 300,000 foreigners to receive work visas in sectors including farming, fishery, and nursing. In 2020, there were 1.72 million foreign workers in Japan, with the bulk (450,000) being in the manufacturing sector.

In contrast to its Western allies, Japan has not been in the international human rights movement. Human Rights organizations like Amnesty and HRW have noted that Japan has abstained from almost all Myanmar-related resolutions at UN forums, including those related to atrocities against the Rohingya Muslims.

Japan also did not address the collapse of democratic institutions and the sharply deteriorating human rights environment in Cambodia, where Prime Minister Hun Sen cracked down on opposition politicians, independent media and political activists. Japan took the lead in drafting a weak resolution on Cambodia at the UN Human Rights Council in September, the human rights bodies point out.

Cover Photograph: Sandamali’s sister and her lawyer walk to the detention centre 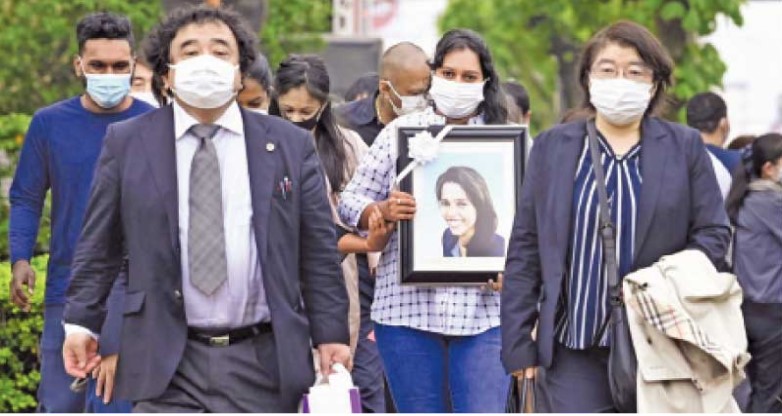