India Has No Choice But to Reach Out to the Taliban

‘Afghans are going to have to decide their future,’ Biden said

In September 2014 on his maiden trip to the United States as Prime Minister of India, addressing the Council on Foreign Relations in New York, Narendra Modi conveyed some public advice to US President Barack Obama: “Don’t leave Afghanistan in a hurry.”

The sage advice was repeated to his successor Donald Trump in no certain terms. Modi’s advice seems to have been greeted with a shrug. Both Obama and Trump were keen to get all American soldiers back home.

It is a different matter that neither could meet the timetable of withdrawal they had set for themselves, and the task was left to Joe Biden. Of late there is bipartisan consensus: both the Republicans and the Democrats want American troops out of Afghanistan.

The Afghanistan quagmire is the longest involvement of US troops on foreign soil since Vietnam. Fatigue and war-weariness hang in the air in American public discourse. And why not? After spending some two trillion dollars and with some 2,800 soldiers killed, what has the US achieved? Its exit from Afghanistan is its biggest foreign policy defeat in the last 45 years. The historical folklore that no foreign power has ever succeeded in occupying and controlling Afghanistan stands vindicated.

Since Obama’s presidency the US has been trying face-to-face negotiations with the Taliban whom they violently overthrew in 2001 taking some of their top leaders to the Guantanamo Bay prison. Both Pakistan and Qatar have played a crucial role in these negotiations. Ironically, some of the top Taliban leaders in talks with the US are former American prisoners!

Taking note of the Taliban’s military capabilities, the support they still enjoy in sizeable parts of the country, and the violent attacks they have mounted killing civilians, both President Ashraf Ghani and his predecessor Hamid Karzai have often stated that the Taliban are Afghan citizens who have gone astray and ought to be brought back into the mainstream of national politics - provided they respect the constitutional legitimacy of the post-US government, shun violence, sever any links with Al Qaeda or other terrorist organisations, and respect human rights.

For the greater part of the negotiations, the Taliban weren’t prepared to accept the constitutional authority of the present government but eventually, under tremendous US pressure, grudgingly agreed to negotiate the terms of power sharing, and accepted America’s principal demands. But going by the ease with which they are able to take over villages and towns even as US soldiers withdraw, some observers wonder if the government in Kabul might not collapse soon.

Though Biden’s meeting with Ghani in the Oval Office on June 26 underlined the legitimacy of the current government, and his assertion that “our troops may be leaving but support for Afghanistan is not ending… we are going to stick with you and we are going to do our best to see to it, you have the tools you need” sounded reassuring, the bottom line, that “Afghans are going to have to decide their future, what they want” said it all. The US deadline for withdrawal stands regardless of Taliban attacks, and from now on the Afghan government will have to fight it out for its future.

Ghani seemed visibly resigned: “our course is to manage the consequences and to ensure that the people of Afghanistan rise to the challenge.”

Given the complex ground realities and shifting sands of loyalties, Afghanistan faces the most daunting prospects. The consequences will not only be felt by the Afghanistan people but will have serious reverberations in India, Pakistan, Iran, Russia, China, as well as the USA and its NATO allies.

Few believe the Taliban are genuinely interested in power sharing, their main goal being to grab power at the earliest. If they do regain power, will they rule with the same regressive policies or present a new, reformed and moderate makeover which they have been assiduously cultivating?

Meanwhile, Pakistan’s support to the Taliban is an open secret. If a Taliban dominated government is installed in Kabul, will Pakistan be doing the backseat driving?

While memories of the horrific treatment meted out to women under the earlier Taliban regime remain fresh in the minds of many, is the Afghanistan of 2021 the same as in 2000? A child born in 2000 is now 21 years old and some might not necessarily go along with a Taliban Islamic Emirate.

India has been shouting from the rooftops that there is nothing called Good Taliban or Bad Taliban, they are all the same, and essentially bad, a perception no longer shared by the US. It has also been flagging the tagline that the Afghan peace process must be Afghan owned, Afghan led and Afghan controlled - reiterated by the foreign minister Jaishankar in September 2020 at the Intra-Afghan peace talks hosted by Doha.

Nevertheless the US decision to withdraw by September 11 and circumstances inside Afghanistan leave India with no option but to reach out to the Taliban. The confirmation by Qatar’s special envoy Al Qahtani that Indian officials met Taliban representatives in Doha recently hasn’t surprised strategic analysts. As early as 2018, when Russia hosted Afghan-Taliban talks in Moscow, India had quietly sent two diplomats. And at the 9th Heart of Asia Conference held on March 30 this year, Jaishankar said that India supports a dialogue between the Afghan government and the Taliban.

Notwithstanding the Taliban’s dubious role in the hijacking of IC-814 in 1999 and its collusion with terrorist groups that attacked India, to protect its longterm interests in Afghanistan, with investments of nearly three billion dollars in hundreds of utility projects, and valuable capacity-building and training intended to generate goodwill among the people and to preempt and scuttle Pakistan’s anti-India designs, seeking a functional relationship with the Taliban makes sense.

But we must ensure our overtures to the Taliban don’t hasten the collapse of the elected government or weaken its position.

The US, India, Russia and Iran can and should collectively work to prevent the return of Al Qaeda or the Islamic State to Afghanistan, and its descent into becoming a safe haven for terrorists. A spike in terrorism will follow if they return. 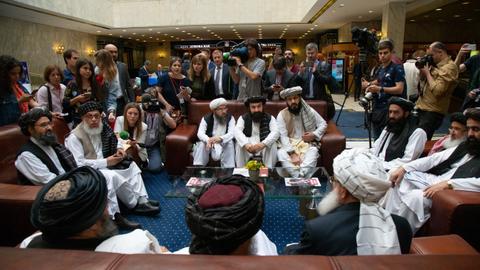