No place at the table

The ease and speed with which the Taliban are believed to have captured half the districts in Afghanistan and supposedly imposed strict Sharia laws must have unnerved millions of Afghans, particularly women, and has shocked the international community.

The Taliban’s lightning onslaught is aimed at forcing the government to negotiate on its terms or face complete military defeat. Afghanistan’s National Security Forces, ANSF, despite all the training imparted by the US and India, haven’t put up a big fight.

Perhaps they lack the patriotic fervour which Indian soldiers show because of their tribal loyalties? Besides, if media reports are to be believed, many of them have not been paid for months. Understandably they aren’t inclined to risk their lives in the fight against the Taliban.

A delegation of government representatives, including former president Hamid Karzai and former chief executive and head of the High Council for National Reconciliation Abdullah Abdullah, met the Taliban delegation headed by Abdul Ghani Baradar in Doha on July 17-18 and agreed to meet again.

They issued a joint statement saying “the two sides (are) committed to continue negotiations at a high level until a settlement is reached”, stressing that they will “work to provide humanitarian assistance throughout Afghanistan.”

Before the talks, Hibatullah Akhundzada, the Taliban’s supreme leader, had said “the Islamic Emirate strenuously favours a political settlement”. And its spokesperson Mohammed Naeem had stressed that “the other side must have a true and sincere will to end the problem”.

Given their success in capturing large swaths of territory, the Taliban’s assurances should be suspect.

Without NATO air support, the ANSF isn’t expected to hold on for long: some cynics give just 6-12 months for the Ghani government to collapse.

Al Qaeda sources claim that 1000-2000 of their fighters are already back back in Afghanistan. At a recent conference in Tashkent Ashraf Ghani accused Pakistan of sending in over 10,000 “jihadi fighters” to assist the Taliban, an allegation denied by Imran Khan who shared the same stage.

The alleged abduction of the daughter of the Afghan Ambassador in Islamabad for a few hours and her torture has further vitiated Af-Pak relations. Pakistan resorted to its usual diatribes against India and accused the Indian government of fabricating the abduction story.

With the exit of US troops imminent, Russia and China have stepped up their efforts to fill in the gap. Russia, keen to secure the central Asian republics from terrorists and stop the narcotic trade, is hosting a meeting of the troika of Russia, China and Pakistan.

A query on why India wasn’t included was tersely dismissed by the Russian spokesman who said India had no influence over the Taliban, and that India and Pakistan keep on accusing each other of exploiting the situation in Afghanistan.

The Chinese government’s interests in Afghanistan relate to protecting the Xinjiang province from radical Islam, mining rich minerals and incorporating Afghanistan in the Belt and Road Initiative.

Shunning its earlier antipathy, Shia Iran has reached out to the Sunni Taliban to retain its religious, political, economic and cultural leverage in Afghanistan.

India, not having found a place on the table with Russia, China and Iran, has no option but to broadly support the American strategy: help the Ghani government survive, while maintaining channels of communication with the Taliban to foil attempts to hoist an Islamic emirate.

India and the US will also want to prevent the return of Al Qaeda, the Islamic State and other terrorist groups and the development of a safe haven in Afghanistan to protect against increased attacks on India. They will also want to save Afghanistan from plunging into a violent civil war, and demand that human rights are observed for all.

Sounds like asking for the moon. In June, General Scott Miller, the top US military commander in Afghanistan had said, “Civil war is certainly a path that can be visualised if this continues on the trajectory it’s on right now.”

Former commander of the Allied Forces in Afghanistan General David Petraeus too painted a very grim picture. “I fear the decision to withdraw has consigned Afghanistan to a bloody civil war, and is likely to produce millions of refugees, cause damage to infrastructure and foist an ultraconservative, theocratic regime over much of the country that curtails women’s democratic processes and human rights.”

Former US President George Bush also expressed his anguish. “I am afraid Afghan women and girls are going to suffer unspeakable harm… they are going to be slaughtered by the brutal people.”

So, is it game over for the Afghan government? Is the Taliban’s takeover of the reins of power in Kabul a given? A lot will depend on how committed the US is to achieving its strategic objectives in Afghanistan after wasting 20 years, spending roughly $2 trillion, and losing the lives of over 2,800 soldiers.

Once all American troops are out of Afghanistan, its dependence on Pakistani support will diminish drastically. And the Biden administration will be less hesitant to mount attacks against the Taliban or terrorist groups to degrade their capability.

Even without boots on the ground, the US has the advanced military power to halt the Taliban’s advance and their takeover of the capital and other key cities from afar. It can demolish terrorist safe havens, strengthen the capabilities of the ANSF by offering weapons and sharing intelligence, and prevent a civil war.

Sustained surgical strikes of missiles from aircraft carriers or bases in the region, especially from Qatar, and the extensive use of drones and aerial bombers could help the ANSF escape total military defeat. And the annual assistance of $3 billion might keep it afloat.

In this way America can nudge the Taliban to participate in inclusive government that involves all major ethnic groups, and that doesn’t throw away the gains of the last 20 years.

Biden can also afford to turn the screws on Pakistan to act against terrorist infrastructure/ terrorists on its soil.

With no boots on the ground, the US will no longer be called an occupying force, and the establishment of an inclusive, moderate government should be welcomed by neighbours.

If Biden shows the political will and resolve to stay the course, he will be hailed as the president who brought back all the American soldiers and also saved Afghanistan from civil war and a return to medieval ages. This could receive bipartisan support at the Capitol.

While conceding that the Taliban have got strategic momentum over the ANSF, General Mark Milley, Chairman of the Joint Chiefs of Staff reportedly said, “I don’t think the end game is yet written.”

And sure enough, a limited air strike by the US on the outskirts of Kandahar which reportedly killed 3 Taliban fighters and destroyed 2 vehicles and was criticised by the Taliban as a violation of Doha agreement might have sent out multiple signals.

To the Afghanistan government that it hasn’t been abandoned, not yet. To the Taliban that the storming of provincial capitals and imposition of Sharia laws will not go unpunished. To ordinary citizens that it won’t be a return of the earlier Taliban Regime. And to Pakistan that it shouldn’t celebrate prematurely.

Taliban spokesperson and member of the negotiating team Suhail Shaheen’s claims that they aren’t aiming to monopolise the government, and assuring women that they won’t be subjected to restrictions except wearing a hijab, are a direct result of US pressure.

But the Taliban’s demand for the ouster of Ghani, whom they call a warmonger, before the new government can be installed stands rejected by the US, at least, for now. White House press secretary Jennifer Psaki reiterated that Biden supports the current leadership in Afghanistan, including President Ghani.

And when he phoned Ghani on Friday, Biden probably conveyed the same message.

Surendra Kumar is retired from the Indian Foreign Service 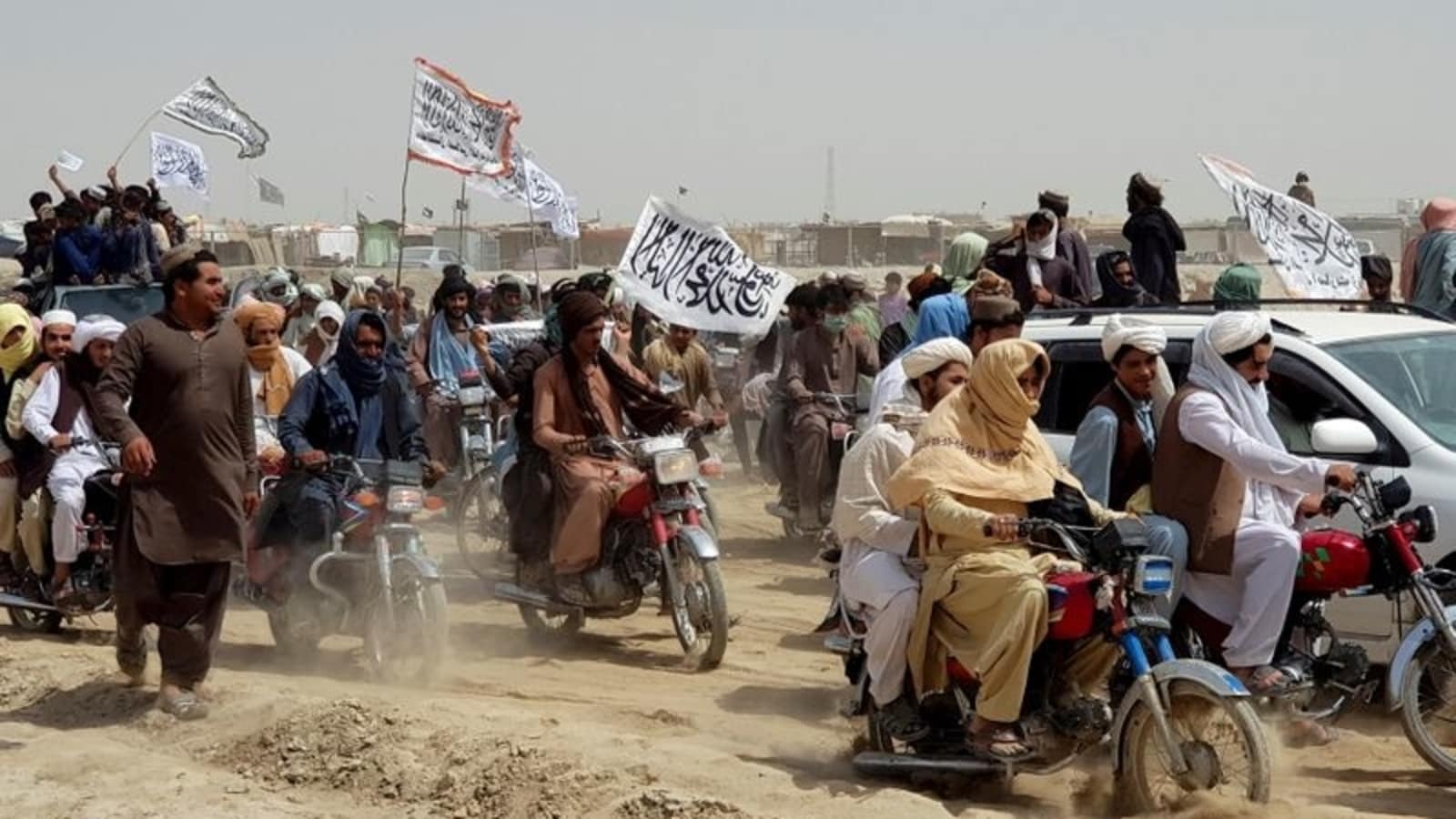