BRATISLAVA:There will soon be no one left to defend human rights or help minorities in Belarus as the country’s third sector moves closer to “complete liquidation”, international rights groups have warned.

Belarus’s authoritarian president, Alexander Lukashenko, has stepped up his regime’s crackdown on any potential opposition in recent weeks, ordering the closure of scores of NGOs, claiming they are being run by foreign entities fomenting the destabilisation of the country.

As of mid-August, more than 60 civil society groups had been shuttered, including not just human rights organisations but some promoting women’s rights, helping the disabled, and working with people who have HIV/AIDS.

This comes amid a wider crackdown on independent media and pro-democracy activists which began a year ago after mass protests following Lukashenko’s re-election in a widely disputed election.

Belarussian civil society has come under increasing pressure over the last year as authorities in the country have moved to repress any possible opposition to the regime.

Not only have many organisations faced sudden police raids and checks, some staff have been arrested or harassed, while demands to fulfil what groups say are impossible administrative obligations have been used to force their closure.

Some groups have moved out of the country and are continuing their work from abroad. However, this limits what services and help they can provide.

“Some groups provide legal services, lawyers, for instance, for people. Those simply won’t be there now,” said McGill.

Groups providing key social services, including help for the elderly or the sick will also be affected.

“Many non-profit organizations did work with the issues that the state did not do and, having lost the services of NGOs, ordinary people, including those from vulnerable groups, will suffer,” Svetlana Zinkevich of the Office for European Expertise and Communications NGO, told the Devex media platform.

Her organisation, which works to build third sector capacity, has been told it must close.

Lukashenko has been in power since 1994 and during his rule, Belarus has been repeatedly criticised for human rights abuses and suppression of opposition. He has often been dubbed ‘Europe’s last dictator’.

But the scale of the attacks on the third sector, and wider repression in society of anyone seen to be linked to pro-democracy or anti-regime movements, has shocked seasoned observers of the country.

Rachel Denber, Deputy Director of the Europe and Central Asia Division at Human Rights Watch (HRW), told IPS: “Belarusian civil society had, despite years of authoritarian autocracy, managed to flourish, expand, and grow quite strong. The scale and scope of the raids, arrests, and moves to close civic organizations in recent months in Belarus is unprecedented in this region.”

There has been an equally shocking crackdown on independent media with most independent news outlets having been forced to close and the few independent journalists still working talking of living in daily fear of arrest.

According to Reporters Without Borders (RSF), the country is now the most dangerous place in Europe for journalists, and the Belarussian Association of Journalists (BAJ) says that over the last year almost 500 journalists have been arrested, 29 have been imprisoned, and there have been almost 70 documented incidents of violence against reporters.

Meanwhile, the BAJ, the only independent representative organisation of journalists and media workers in Belarus and one of the country’s most prominent champions of freedom of expression, has been dissolved on the order of the Supreme Court for allegedly not dealing with alleged administrative violations after a Justice Ministry inspection earlier in the year.

One worker in what remains of Belarus’s independent media told IPS: “We have never encountered so many violations of the rights of journalists, especially physical attacks, arrests, and detentions.

“An unprecedented number of journalists are under criminal prosecution, being deemed political prisoners. It is obvious that the authorities are trying to silence the press, constantly increasing the level of pressure, thereby grossly violating the right of their citizens to information, and no one knows when this will end.”

Apart from NGOs and their staff, the dire situation has also forced many ordinary people to leave the country.

Natalia*, a former emergency services worker who was involved in organizing protests last year, told IPS she had fled Belarus after fearing she and her family were about to be arrested.

She said that she was arrested many times, abducted off the street by police, told her three children would be taken from her and put into care unless she stopped organising protests, tortured in police cells, had her leg broken by riot police at a protest before suddenly fleeing with the rest of her family one night after discovering her home had been broken into by security forces.

“I had kept a small bag of clothes packed in case I was detained and held ahead of a trial. It was all I had when I crossed the border. I later found out a warrant for my arrest had been issued,” she said.

Meanwhile, Alexiy*, a former student in Minsk, told IPS how he had left the country earlier this year by trekking through forests across the border into Russia and then travelling on to Western Europe.

He said that what has been happening in Belarus over the last year was “shocking and sad” and that life had become “terrible” in many places, especially the capital Minsk. “There is fear everywhere,” he said.

It is unclear how long the current repression in the country is likely to last. Much of the international community has condemned what they say are the appalling human rights abuses being committed in Belarus, and some countries have imposed tough sanctions on Lukashenko’s regime.

But whether these are having their intended effect is hard to gauge.

Groups like Amnesty International suspect the NGO closures are related to sanctions imposed by Western nations.

It is also thought that the regime is orchestrating flows of thousands of undocumented immigrants towards its borders with EU states in the Baltic region, to potentially provoke an international refugee crisis which it can use as leverage to get the EU to reverse sanctions.

Analysts also believe that the regime’s fate – and that of pro-democracy movements, independent media, and the wider third sector – depends more on financial injections from Russia than external pressure from Western governments.

Russian president Vladimir Putin has approved USD 1.5 billion in loans for Belarus over the last year while Lukashenko is also courting closer economic ties with his traditional ally.

McGill said: “The country can go on without the third sector, and it can go on as it is as long as there is no economic collapse, which is not going to happen while Russia is giving its financial support.”

But others see some hope in the fact that even as it faces liquidation, people working in Belarus’s civil rights groups are refusing to abandon their work entirely.

“The situation is grim. [But] it’s heartening that so many civic groups are still finding ways to carry out this work. It speaks to their commitment and sheer determination,” said Denber.

*Names have been changed for reasons of safety. 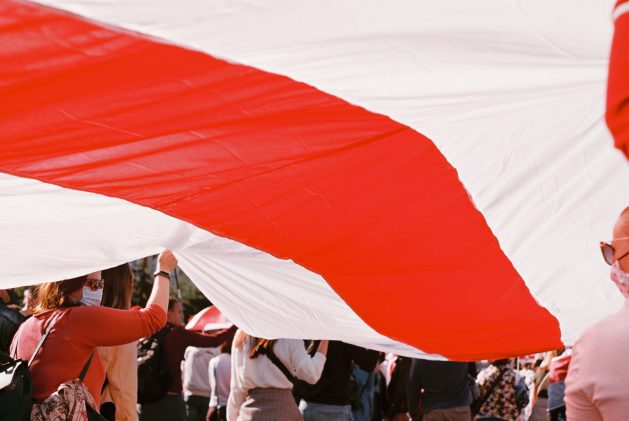