Panjshir has fallen to the Taliban with a bang — and a whimper. The bang is because a 40-year old legend lies shattered, the legend of the invincibility of Panjshir Valley. And the whimper is because the short-lived ‘resistance’ had a tame ending.

A BBC report said the revolt’s two top leaders Ahmad Massoud and Amrullah Saleh were not even in Panjshir during the past 4 days at least but had left for Tajikistan and were apparently leading the so-called ‘resistance’ via Twitter. It may seem farcical and will have deleterious consequences.

First, the significance of the Taliban’s ‘conquest’ of Panjshir is that the war has ended. The chances of revolts erupting in other parts of the country are remote. Mazar-i-Sharif mutely watched, where the Tajik population is substantial. Atta Mohammed Noor and Rashid Dostum have been surprisingly quiet and both are probably out of the country. After capturing Ismail Khan, Taliban let him leave for Iran. Noor, the most prominent warlord, is inclined to put a priority on politics over military action.

These warlords have no political future. It is yet to sink in that with the Taliban's ascendance, the era of warlordism is ending in Afghanistan. Dostum is charged with war crimes, having massacred hundreds of Taliban fighters in captivity.

There must be tons of incriminating evidence against Saleh too. Noor is reputed to be the richest man in Afghanistan but his standing as a public figure plummeted in recent years due to his image as a very corrupt man. Ismail Khan is far too old, and at the end of the road. None of them has a pan-Afghan appeal to even remotely match Taliban’s.

Tajikistan seems to have become a sanctuary for retreating Afghan warlords. But will it become a base for mounting anti-Taliban resistance? Unlikely. Russia’s stance will be crucial. Admittedly, Moscow played a dubious role fuelling the Panjshir revolt. But Taliban and Pakistan are in a forgiving mood, and the good thing is that Russia always knows which side of the bread is buttered.

The Russian Foreign Minister Sergey Lavrov is already toying with the idea of accepting the Taliban’s special invite for the announcement of their government. One happy solution would be that Moscow provide a lavish decadent life in exile for these immensely rich Afghan warlords, and thereby generate some equity vis-a-vis the Taliban. It is a familiar Russian tactic in the Central Asian steppes.

Russia’s main dilemma, however, remains: If the Taliban stabilise the situation in northern Afghanistan and tighten up border security, the threat perceptions in Central Asia, which currently borders on xenophobia, would recede. Now, Russia’s grip over Central Asian states is directly linked to its role as provider of security. The more secure those countries feel, the less will be their dependence on Moscow.

Quite obviously, the Taliban are savvy enough to understand all this. Therefore, a consolidation of the Taliban’s grip on northern Afghanistan is to be expected. Taliban knows that this is China’s concern too.

Like Russia, the United States is also hyping up the spectre of civil war in Afghanistan. Both are stakeholders, in a manner of speaking, in a civil war, since their interference in Afghanistan is dependent on unstable conditions. However, unlike Russia and the US, Iran’s unhappiness with the Taliban’s assault on Panjshir is authentic — based on its ethnic and cultural affinities with the Afghan Sunni Tajiks who account for somewhere between 25-30 percent of the population.

However, Iran’s core constituency is the Hazara Shia and Taliban will accommodate its concerns. Any expectation that Iran may gang up with Russia to fuel an anti-Taliban resistance will remain a pipe dream. Iran has huge stakes in Afghanistan’s stability. Border security is a core concern.

Above all, the Taliban is no longer an adversary for Tehran, which is already looking for economic opportunities in Afghanistan. Connectivity through northern Afghanistan to Uzbekistan and Central Asia is a strategic project, as its partnership with China is poised to expand by leaps and bounds once the 25-year, $400 billion economic pact gets activated.

Above all, Tehran shares China’s geopolitical concerns, especially to keep the Americans out of Afghanistan. Iran is becoming a member of the Shanghai Cooperation Organisation mechanism and it now has added leverage to give traction to dealings with the Taliban government.

Indeed, the US is frantic that other countries (except lackeys like the UK or Australia and Canada) may eventually begin to deal with the Taliban government. Washington wants to prevent that happening by hyping up scaremongering and scripting false narratives casting the Taliban government in poor light. Upto a point, this may work, but a strategy based on negativism is an inherently flawed one.

The US’ future prospects for interference in Afghan affairs will depend heavily on the fortunes of the ISIS. The US has been exaggerating the ISIS threat lately, as it provides alibi for future military intervention in Afghanistan. In reality, though, the ISIS could grow only in the benevolent climate of the US occupation and the tacit acquiescence of the Ashraf Ghani government.

Ghani’s Kabul set-up had selective uses for the ISIS affiliates in their agenda to bleed Pakistan. The Pakistani Taliban most certainly was also complicit. However, Pakistan will ensure that the Taliban government clamps down on these terrorist groups operating out of Afghanistan. It is a profound national security issue for Islamabad. High-level consultations with the Taliban leadership have already begun. The pincer movement will start showing results sooner than one may think.

Without doubt, the Taliban have ISIS in its crosshairs. But, arguably, if the extent of state patronage that ISIS enjoyed is no longer available, it may cease to be a magnet for radical Afghan elements. Again, with the end of foreign occupation, Afghanistan is done with ‘jihad’. Taliban has shown the skill to assimilate extremist elements if they are reconcilable as well as the ruthlessness to eliminate recalcitrant troublemakers.

Removing all conceivable alibi for foreign intervention will be a top priority for Taliban leadership. But the Taliban is not a revanchist movement. In the Taliban folklore, what took place was a national liberation struggle to rid the motherland of colonisation. Importantly, the trajectory of the Taliban’s relationship with China is linked to its success in curbing the terrorist groups. And Taliban attributes the highest importance to China’s goodwill and all-round support. Therefore, the Pentagon generals will eventually have to eat their words once again if they keep pushing the apocalyptic scenario of civil war conditions. Some American think tankers give the spin that the Taliban will not deny space to its militant allies. But these self-styled experts overlook that tactical considerations of the period of resistance no longer exist today and the Taliban’s interest lies in stabilising the Afghan situation and get on with good governance.

To be sure, there are daunting challenges ahead. The massive ‘brain drain’ weakens the new government’s capacity to perform efficiently. Ghani and his clique have looted the Treasury. As if in tandem, the US promptly blocked the Taliban government’s access to the country’s reserves (approx. $9 billion plus.) On top of it, sanctions have been imposed.

In sum, the US is vengeful and determined to make life as difficult as possible for the Taliban government. Such a tactic may continue so long as the Taliban defies American pressure. But the silver lining is that the US’ European allies may not follow its footfalls. Germany has already broken ranks. Italy too may follow. France is brooding. Qatar is manifestly sympathetic toward the Taliban. China, of course, has openly stated its readiness to help.

This is where the fall of Panjshir becomes a defining moment. The Taliban’s preference was to reach a negotiated settlement. But once the Taliban realised that Massoud and Saleh were asking for the moon — 1/3 of all cabinet posts, etc. — they decided to act.

A protracted revolt just 50 kilometres away from the capital would have dented the Taliban’s credibility and opened the pathway for large-scale foreign interference. Certainly, the aura of victory in Panjshir boosts the Taliban’s national standing. At the end of the day, the Taliban won where the Soviet Army failed even after 9 attempts. 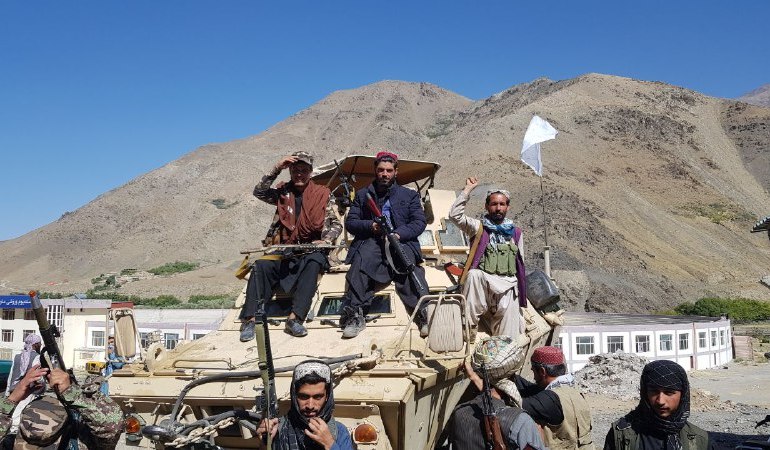