The Taliban at the UN

In a world that seems to be at verbal war with itself, the Taliban is consolidating its hold in Afghanistan. France, in a highly unusual reaction, has withdrawn its envoys to the US and Australia on a submarine deal accusing the two governments of ‘lying’ and the Quad member nations - US, India, Australia and Japan---are meeting in person in New York amidst strong protest and warnings from China.

In the midst of this, the Taliban that has formed a noninclusive government in Kabul has astounded all by nominating its Doha-based spokesperson Suhail Shaheen as its Ambassador to the United Nations. The Afghan ambassador representing the earlier Ghani-led government Ghulam Isaczai has not stepped down, and clearly, this United Nations General Assembly session will see some controversy on this.

UNGA is being held against the backdrop of a rising China, a diminished US, and a consolidating Taliban in Afghanistan. The Taliban remains in the consolidated UN list for sanctions but that has not stopped it from insisting that it should be recognised as the government of Afghanistan and has nominated the Taliban.

The UN Secretary-General has been informed by the Taliban’s new Foreign Minister Amir Khan Muttaqi through a letter that Shaheen is representing the new government in Afghanistan and should be allowed to speak at the UNGA. The letter has been forwarded to the UN nine member credentials committee and not surprisingly, a decision is still awaited.

Interestingly Pakistan, according to reports from New York where the session is ongoing, had an idea about this but is clearly not supportive. In fact it's Foreign Minister Shah Mahmood Qureshi formally questioned the nomination saying, “Who is he representing?”

Speaking to the media Qureshi asked, “who is he reporting to? What kind of communication can you have with a person at the U.N. who is not recognized? It is a complex and evolving situation.”

Meanwhile, recognition for the Taliban has been held up by its delay in forming an exclusive government. Its first cabinet is full of Taliban hardliners with the supposedly agreed-on representation of other groups and individuals in the new government not making visible progress. Russia and China are leading the consultations with the Taliban with former Prime Minister Hamid Karzai and Foreign Minister Abdullah Abdullah also part of the talks at different levels. However, a breakthrough has still to be reported.

The one concession that the Taliban is paying to world opinion is to keep its head down insofar as excessive human rights violations are concerned. Compared to its first innings in power 20 years ago this new entity of a younger generation is following some basic code of conduct that has prevented widespread arrests, detentions, and deaths.

Women of course remain the worst affected with reports now of all women-run restaurants being shut. Women have disappeared from the streets of Kabul which was the little oasis that the Americans created to show the world of their good intent. That this was not true for the rest of Afghanistan is becoming clearer by the day. The Taliban at the onset had promised that women could work and study, but not be part of politics. So while the latter is true as the first Cabinet does not have a single woman representative, the Taliban has still to announce its policy for women in real terms. The vague ‘we will follow the Sharia’ has little meaning, as the interpretation of Islamic law varies according to the mindset of those in power clearly. For instance, Malaysia interprets the Sharia very differently from Saudi Arabia and so on.

After the first flush of success, the Taliban will have to cull its policy on a more democratic platform, simply to reduce dissent and get the space to govern. Significantly most of the world has indicated its willingness to recognise a Taliban government that is inclusive, follows a more human code of conduct, condemns terrorism and respects human rights for women, dissenters and the media. The Taliban has announced not once but a few times that it will not follow the path of terror, and will not allow its territory to be used by extremist and terror groups. But on the rest, it is still dragging its feet, with the talks ongoing.

The Taliban presence at the UN is to send a message that it expects to be recognised as the legitimate government of Afghanistan. Permission for Shaheen is not likely in this UNGA session at least where the world is still groping for a cohesive policy on the new government in Kabul, but it is really the proverbial had thrown into the ring announcing: ‘we are here, you have no choice but to recognise us’. The politics around this is already playing itself out at the UN from all believable reports and indifferent state capitals across the world.

By the way, for those interested, AP has reported that the U.N. spokesperson Stéphane Dujarric confirmed that the UN Secretary-General António Guterres received the Taliban request on the letterhead "Islamic Emirate of Afghanistan, Ministry of Foreign Affairs," signed by "Ameer Khan Muttaqi" as "Minister of Foreign Affairs." The UN had not recognised the last Taliban government but observers now sense a ‘softening’ of sorts. 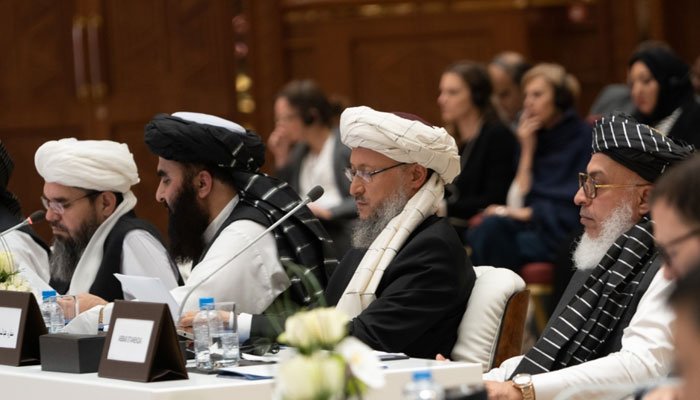