India and Sri Lanka now appear to be shedding doubts and reservations about each other and getting closer in multiple ways simultaneously.

India’s urgency to counter China and Sri Lanka’s economic compulsions have combined to bring about top-level ‘to and fro’ visits in quick succession.

This will be followed by President Gotabaya Rajapaksa’s visit to Kushinagar in North India on October 20, to participate in the inauguration of the Kushinagar International Airport.

The airport will be inaugurated by Indian Prime Minister Narendra Modi and the Indian and Lankan leaders are expected to have talks on the sidelines of the event.

Kushinagar is where the Buddha attained Mahaparinirvana (or release from saṃsāra, karma and rebirth). To Buddhists, Kushinagar is as sacred as Buddha Gaya where the Buddha attained Enlightenment. Archaeological excavations led by C.L. Carlleyle in the early 1870s, had revealed the main stupa in Kushinagar. A 6.10-meter-long statue of a reclining Buddha was discovered in 1876. In 1903, A Burmese monk, Chandra Swami, made the disused Mahaparinirvana temple into a living shrine.

During his visit earlier in the month, Indian Foreign Secretary Harsh Vardan Shringla had given finishing touches to a new scheme to strengthen bilateral economic and political links which had slackened despite the relentless efforts of successive Indian diplomats.

Economic relations particularly were in the doldrums. India-suggested and mutually agreed development projects were languishing while Chinese projects were forging ahead both in volume and speed. Even Indian projects which were within India’s grasp like the Eastern Container Terminal at Colombo, were snatched away. The coal-fired power plant in Sampur and the LNG project in Kerewelapitiya also slipped out.

However, a variety of factors led to a change in the outlook in Sri Lanka. The COVID-19-triggered economic slowdown, the financial/dollar crunch it created here, and the possibility of losing the lucrative American market and the European GSP Plus tariff concession, led to the Rajapaksa regime’s taking a softer line towards the US, EU and their allies India and Japan.

This automatically led to some distancing from China. While China was useful for accessing big loans, the market for Sri Lankan products were in the US, EU and India and not China.

Although it is not known if any news projects for India are in the Sri Lankan pipeline, Indian Foreign Secretary Shringla, Lankan President Gotabaya and Finance Minister Basil Rajapaksa had all shown keenness to increase Indian private sector investments in the island. Both governments appear keen to make these plans work this time round.

To make up with India, the US$ 700 million project to build and run the Western Container Terminal in Colombo port has already been given to the Adanis of India. More recently, a decision was taken to give a US$ 400 million stake in the LNG plant in Kerawelapitiya to the American company ‘New Fortress Energy’ to strengthen ties with the US. More US investments are expected, especially in the tourism sector.

Politically, Sri Lanka wishes to be a non-aligned and neutral country to ward off the possibility of becoming a theater of war between the US and India on the one hand (as partners in QUAD) and China on the other.

With the creation of the AUKUS and the gifting of nuclear submarines to Australia by the US, any war here could well become a nuclear war. This is why President Gotabaya Rajapaksa proposed to the Indian Foreign Secretary that New Delhi should support Sri Lanka’s bid to make the Indian Ocean a Zone of Peace.

It is not clear if New Delhi would go along with this as it has hitched its geo-political security wagon to the US vis-à-vis China. But if New Delhi is to keep Colombo in its fold, it has to address the latter’s anxieties and recognize its yearning for strategic autonomy.

On its part, belligerent China is in no mood to relax its anti-India stand. Replying to a question about Indian Vice President Venkaiah Naidu’s recent visit to Arunachal Pradesh, which China calls “South Tibet”, the Chinese Foreign Ministry spokesman Zhao Lijian said: “The Chinese government has never recognized the so-called Arunachal Pradesh established unilaterally and illegally by the Indian side, and is firmly opposed to the Indian leader’s visit to the area concerned.”

India and China are at loggerheads in Sri Lanka and also Afghanistan where China supports the Taliban government and India opposes it.

The on-going visit of the Indian army chief, General Manoj Mukund Naravane, fits into New Delhi’s bid to more forcefully and consistently engage Sri Lanka in multifarious ways. As General Naravane himself said here on Wednesday: “As matured democracies, the quality interaction among the elected leaders in both countries is mirrored by similar interactions by both militaries.”

General Naravane then highlighted the importance of modernizing both the Indian and Sri Lankan military organizations to suit international standards and to be geared to meet with different types of emerging threats, including cyberattacks.

Talks between him and Lankan Army Commander Gen.Shavendra Silva, also focused on the ongoing ‘Mithra Shakti’ training exercise where both armies are engaged. The visiting Indian Army Chief assured support for continuity and broadening of training programs in India. Gen.Naravane offered the India army’s technical assistance for upgrading the military requirements of the Sri Lanka Army.

Several Indian army chiefs had visited Sri Lanka before Gen. Naravane. But the latter’s visit would stand out because he would be seeing a changed Lankan army. The present Lankan army, thanks to President Gotabaya Rajapaksa, is part and part of the country’s civil administration unlike the previous Lankan armies and other armies in South Asia. The Lankan army is now used in regular infrastructure construction, urban development, COVID-control, Health Administration among other activities. Retired Majors General were appointed to head Customs, Civil Aviation and Ports departments.

The Defense and Foreign Secretaries are retired high ranking military personnel. When the pandemic struck, Army Commander General Shavendra Silva was put in-charge of COVID-19 containment and he did a “splendid” job, as Naravane said on Wednesday.

In his most recent address to the public at Saliyapura, President Gotabaya Rajapaksa justified the appointment of military officers saying that he wanted jobs done. He has faith in the army as he was himself a Lt.Colonel during the war.

With Sri Lanka being pushed into the Indo-Pacific geo-political vortex because of the sharpening conflict between the entrenched powers (US, UK, India, Japan and Australia) and the emerging power (China), the Sri Lankan army could acquire a different profile to tackle the new situation.

In fact, intensifying geo-politics with a strong military dimension could affect all armies in the region. Against this background, it will be worthwhile to study the development of the Sri Lankan army and other armies in the region. In this context, there is a need for these armies to engage with each other.

This has been recognized by General Naravane. On Wednesday, he noted that high level political engagements between India and Sri Lanka are being matched by high level military engagements. 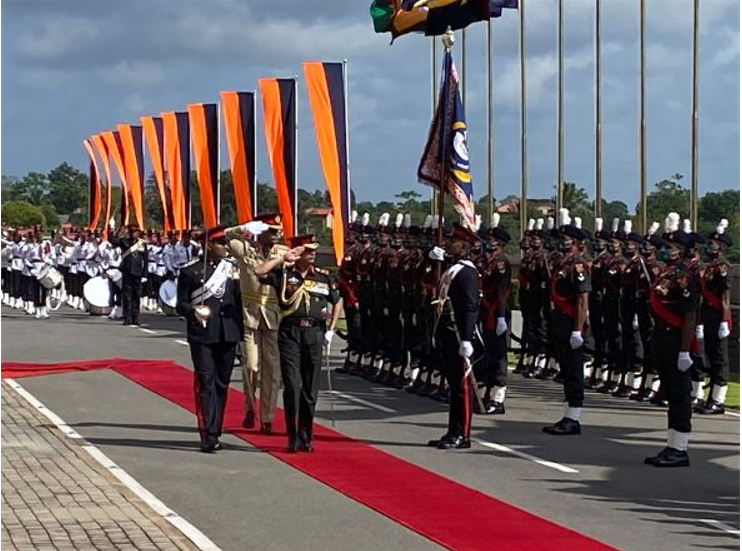