China’s punitive actions, one against a state-owned Sri Lankan bank and the other its endorsement of a Chinese company’s Letter of Demand for US$ 8 million from a Sri Lankan government official in the organic fertilizer purity issue, have invited harsh anti-China public comments.

Although the government in Colombo has chosen to be silent, Sri Lankans as a people including the media, now see China as a threat and not a friend. This is a huge setback for China in Sri Lanka, which has so far been seen as a firm friend of Beijing’s.

Relations between Sri Lanka and China were excellent between 2010 and 2015 when the pro-China Mahinda Rajapaksa was President. During this period, China constructed the US$ 1.1 billion Hambantota port, an ultra-modern container terminal in Colombo, a state-of-the-art airport at Mattala, and had begun constructing the US$ 1.4 billion Colombo Port City.

But relations struck a bad patch when the Mahinda Rajapaksa government was replaced by the pro-West regime led by Prime Minister Ranil Wickremseinghe. The port city was stalled for a year and a half for alleged corruption. China reportedly incurred a loss of US$ 380,000 per day as a result of the suspension of work.

Eventually, the government had to bow to China. It had to give China outright possession of 20 hectares of land and another 88 ha on a 99 years lease in the Port City. Unable to pay loan instalments for the Hambantota port, the government leased it out to China for 99 years.

When Gotabaya Rajapaksa, brother of Mahinda Rajapaksa, assumed the Presidency in 2019, he jolted China by telling an Indian interviewer that he will re-examine the Hambantota deal. Eventually he restricted himself to ensuring that the security of the port was in the hands of the Lankan navy.

Under Gotabaya’s charge, China continued to fund various projects and extended financial help. But being more sensitive to India’s security concerns than Mahinda Rajapaksa, Gotabaya yielded to India’s pressure to cancel a China-funded and ABD-sanctioned solar energy project in the islands of Jaffna close to the Indian coast. The Chinese were dismayed but did not take any punitive action.

When COVID-19 struck, India took the lead in supplying Sri Lanka its Covishield vaccine. China tried to fill the gap when India stopped its supplies, but the Lankan authorities did not permit Sinophram to be used on the ground that the data given were incomplete.

The Chinese on their part refused to give more data. With the result, 600,000 does were in cold storage for months even as COVID deaths were mounting. When the bar on Sinopharm was eventually lifted, China rushed to make Sinopharm the main vaccine in the island.

President Gotabaya’s decision to ban the use of chemical fertilizers entirely and force farmers to use only organic fertilizers, created an agricultural crisis. Since Sri Lanka had no commercial production of organic fertilizer, it had to import urgently. China won a contract. But the ship carrying the organic granular fertilizer was not allowed to enter Colombo port because the Lankan quarantine authorities said that samples of the fertilizer had the harmful bacteria Erwinia.

On a court order, the State-owned Peoples Bank did not honor the Letter of Credit. The Chinese embassy and the Chinese company, Qingdao Seawin Biotech Group Co Ltd., argued that the consignment had been cleared by the Chinese authorities and that the testing at the Colombo end by the National Plant Quarantine Service (NPQS) was not technically proper.

And in a tit for tat step, the Chinese embassy blacklisted the Peoples’ Bank. The Lankan media accused China of bullying. The Chinese embassy then suggested that the samples be tested in a world renowned lab in Europe but this did not secure any response.

The Chinese company then escalated the conflict by sending a legal notice to the Lankan official at the NPQS, Additional Director W.A.R.T. Wickramaarachchi, who had issued the test reports. The Letter of Demand seeking US$ 8 million in three days. If not, it threatened to make the official who issued the test reports personally responsible and liable to legal action.

Through its local lawyers, the Chinese company stated the reasons why it considers the Sri Lankan tests invalid. After saying that the Qingdao Seawin Biotech Group is the largest organic manufacturer in China, exporting to 600 clients across 51 countries including US and Germany, the Letter of Demand said that the charge that the consignment had Erwinia was “wrong, incorrect and untrue.” It said that the National Plant Quarantine of China had certified that there was no harmful bacteria.

The letter said that the production process was Roller Double Drying at 600 C. “All pathogenic raw materials will be killed in that temperature,” it pointed out. The letter further said that the Chinese authorities had tested samples on October 3 and 13 and the reports issued by the Technical Center of the Qingdao customs clearly showed that the samples did not contain Erwinia.

Accusing the Sri Lankan quarantine authorities of not following the testing protocols they ought to have followed as signatories of the International Plant Protection Convention (IPPC), the lawyer’s notice to the Additional Director said: “The test and identification of Erwenia spp ought to be as set out in IPPC Diagnostic Protocols for Regulated Pests ISPM 27: Erweinia. However, the testing and/or isolation and the results set out in your aforementioned reports, more particularly your report dated 4, October 2021, are not in compliance or conformity with the aforementioned IPPC Diagnostic Protocols for Regulated Pests ISPM27: Erwinia amylovora, in as much as the growing temperature for Erwinia is 25c to 30c. The quarantine testing temperature for Erwinia carotovorv ought to be set at 25c to 35c and according to the applicable international standards agreed and set out in IPPC, the temperature of testing is set at 25c as per IPPC Diagnostic Potocols for Regulated Pests ISPM27 DP13. Furthermore, the pathogenicity experiment of inspection and quarantine of harmful microorganisms needs to use Koch hypothesis experiment on healthy plants.”

News reports in Sri Lanka said that the Lankan quarantine official concerned had not received the said Letter of Demand. The Sri Lankan government has also been silent. Government has the option of going by a court order if one or more of the parties approach a court. Alternatively, it could take up the matter diplomatically with the Chinese embassy since the Chinese embassy is openly pushing the Chinese company’s case.

If the dispute festers and if the media coverage, now very hostile to China, continues, Sri Lanka-China relations will be badly affected. Sri Lanka may also suffer. Although China is not a market for Sri Lankan exports (the US and EU are), it is the only source of money for infrastructure development which the war-ravaged country is thirsting for. China has also been one of the few unwavering supporters of Sri Lanka in international fora, especially the UN Human Rights Council where Sri Lanka bashing by the West is a hardy annual.

Much depends on the attitude of the Lankan President Gotabaya Rajapaksa who enjoys vast discretionary powers as the Executive President. But unlike his brother Prime Minister Mahinda Rajapaksa, he does not seem to have a natural affinity with China.

The 60 dollar question now is: will Gotabaya Rajapaksa step in and put out the fire or will he allow it to consume Sino-Lankan relations. With the US and India emerging as a possible alternative to China he could take a hard stand on the issue.

But the Chinese themselves appear to be keeping the door for a settlement. The Letter of Demand indicates that their quarrel is with the Addition Director of the Lankan Quarantine Service personally, as he had signed all the contested test reports. Perhaps making him the target is a ploy to enable the Lankan government to find a solution.

Perhaps the government could agree to the earlier Chinese suggestion for third party testing in Europe, with both the exporter and the importer agreeing to accept the results.

However, the prospects do not look bright as even the China-friendly Prime Minister Mahinda Rajapaksa had told the Chinese Ambassador that Sri Lanka could not accept tainted fertilizers and that his country would accept only consignments which met Sri Lankan standards. 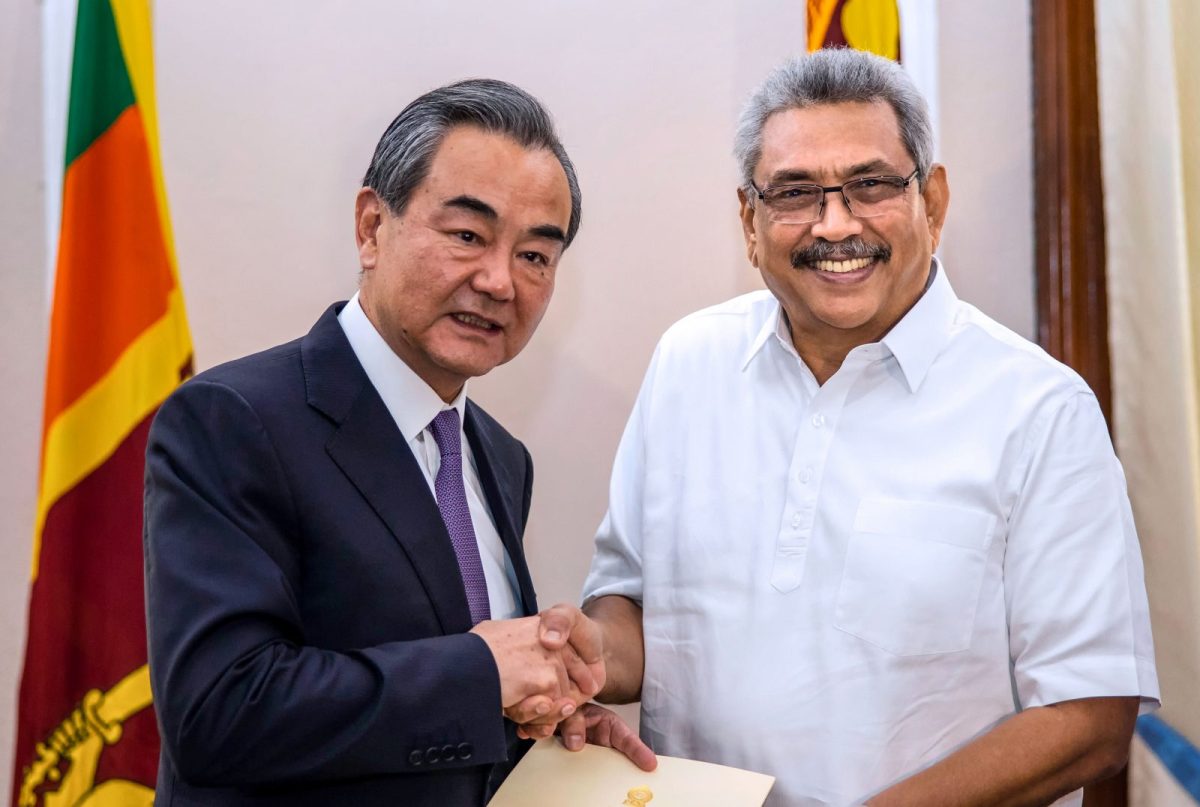