Tries to fill a gap in Indian policy on Lankan fishermen

China is assiduously cultivating North Sri Lankan Tamil fishermen in an effort to fill a gap created by India’s inaction in regard to the suffering these fishermen undergo as a result of massive poaching and bottom trawling indulged in by Tamil Nadu fishermen in the Palk Strait, Palk Bay and the Gulf of Mannar.

In a strategic move aimed at getting the support of the Tamil-speaking fishermen of the Northern Province, China has set up a sea cucumber hatchery and a foodstuff factory and has also gifted fishermen with fishing gear worth Lankan Rupees (LKR) 6 million.

The Chinese embassy tweeted that during his visit to the Northern Province recently, Ambassador Qi Zhenhong took local officials and reporters on a study tour of the “New Silk Road” Foodstuff factory at Mannar. The factory employs 100 plus local workers, 85% of whom are females from nearby villages. Every month the factory produces 300,000 cans of fish and provides incomes to thousands of fisher families in the area, the tweet said.

The Tamil daily Virakesari reported that while in Mannar, the Chinese Ambassador went into the sea with the help of the Sri Lankan navy to see the Rama Sethu or the series of shoals between Sri Lanka and India which, it is believed, were the little islands created by Hanuman to help Lord Rama’s army crossover from India to Sri Lanka in the epic Hindu Ramayana.

The Jaffna-based economist Dr. Muttukrishna Sarvananthan, writing in 2019 in the state-owned Daily News notes that the areas around the Gulf of Mannar, Palk Bay, and Palk Strait are home to large stocks of marine resources. The shallow seas are rich grounds for high value shrimp species, and sedentary, demersal fish.

After the end of the anti-terror war in 2009, Jaffna district should have experienced an increase in fish production, but it experienced a fall of 34%. This is because of poaching by Indian fishermen using bottom trawlers, Sarvananthan says. The fish catch in Mannar declined by 17 % between 2012 and 2013 and by another 12% between 2014 and 2015..

Bottom trawling has also been “mass killing” the under-grown fish (called ‘by-catch’) as trawlers shovel the bottom of the seabed indiscriminately. The trawlers also irreparably damage or destroy fishing nets used by fishermen in Sri Lanka, thereby causing the latter to avoid fishing on days that Indian trawlers are expected to poach in Sri Lankan waters, consequently incurring a livelihood opportunity cost.

Quoting Oscar Amarasinghe, Sarvananthan says that over a three-year period (2006–2008), five estimates of loss ranged from US$ 16 million (lowest) to US$ 56 million (highest) per annum. The average of these five different estimates is US$ 41 million or LKR 5,293 million per annum.

Repeated appeals by the North Lankan fishermen to the Sri Lankan and Indian governments to stop the Indian fishermen from poaching and bottom trawling, have failed.

The Indians keep promising to restrain their fishermen from crossing the International Maritime Boundary Line (IMBL) and from bottom trawling in Sri Lankan waters, but have been unable to deliver because fishermen are a powerful political constituency in Tamil Nadu.

Previously, the Sri Lankan navy used to shoot, and sometimes even kill the intruders, but this is no longer done on appeal by India to treat the intruders humanely. This weekend 43 poachers were arrested. And as in the past, these would be released (only to go back and come again).

The governments of India and Sri Lanka have set up a Joint Working Group to meet periodically and discuss the fishing issue, but these meetings have not been productive. Efforts by the Tamil Nadu and Indian governments to divert these fishermen to deep ocean fishing have failed.

The North Lankan fishermen’s appeals to Lankan Tamil politicians and successive Lankan governments to take up the matter with India strongly, have fallen on deaf ears. While Colombo has not been sufficiently interested in the issue, as it affects only the minority Tamils, Lankan Tamil politicians do not want to antagonize or alienate their counterparts in Tamil Nadu because the latter support the larger Lankan Tamil demand for provincial autonomy.

Some recent incidents of Lankan Tamil fishermen attacking the Indian intruders did not get local political support as such attacks would spoil the Lankan Tamils’ fraternal ties with Tamil Nadu.

To prevent China’s entry into the Northern fisheries sector to the detriment of Indian interests, and to enable both Indian and Sri Lankan fishermen to jointly fish in the narrow sea, India could consider a proposal made by a former Principal Scientist at the Madras Research Centre of the Central Marine Fisheries Research Institute of India, Dr. Mohamad Kasim.

According to Dr.Sarvananthan, Dr. Kasim envisaged the construction and deployment of artificial reefs for the restoration of the coastal ecosystems; improvement of biodiversity; and increasing the biological resources. The artificial reefs should complement the natural coral reefs as they do in the coasts of Kerala, Tamil Nadu, Pulicat, and various other places in India.

The biodiversity of the bottom living bio-foulers could be greatly increased by increasing the sea bottom substratum. Sarvananthan quotes Dr. Shinya Otake, a Marine Biologist at Fukui Prefectural University in Japan, to say that some of the artificial reefs built in Japanese waters support a biomass of fish that is 20 times greater than similarly sized natural reefs.

Adoption of these steps would improve the livelihood of coastal fishing communities of both Tamil Nadu and North Sri Lanka, as there would be enough fish for the fishermen of both areas. 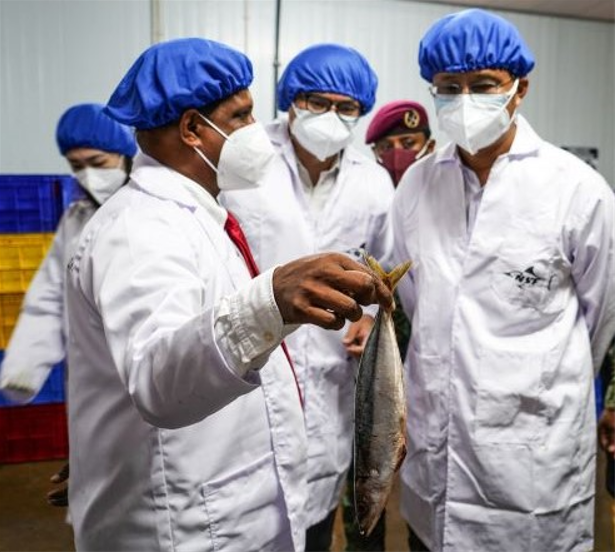