Sri Lanka and India on Thursday signed a fresh agreement on the 99 giant oil tanks in Trincomalee to supersede the controversial one signed 19 years ago in 2003.

Through the new agreement, 85 of the 99 tanks will be under the control of Sri Lanka, either directly or indirectly, the latter being through a joint venture with India in which Sri Lanka will have a 51% share. Each tank can hold 12,000 mt of oil.

The Sri Lankan Energy Minister Uday Gammanpila described the new agreement as “historic” and the Indian High Commission tweeted to say that it is “a milestone in India-Sri Lanka economic and energy partnership.” The High Commission’s tweet further said: “ Congratulations to all parties on signing the Agreement to develop Trincomalee Oil Tank Farm. Sincerely appreciate the guidance from leadership of India and Lanka and support from all Ministers and officials concerned.”

It is reliably learnt that the President of Sri Lanka, Gotabaya Rajapaksa, acknowledged the unique role played by Minister Gammanpila in arriving at this agreement and said that only Gammanpila could have brought it about. The Minister is an outspoken Sri Lankan nationalist, and with him working out the agreement, it is expected to go down well with the island’s nationalists, who have been wanting Sri Lanka to retrieve the tanks given to India by an agreement in 2003. “What no government could do in 19 years has been achieved now,” Gammanpila said with satisfaction.

In the annexure of the India-Lanka Accord of 1987, India had proposed to run the tanks through a joint venture with Sri Lanka, which the latest agreement envisages.

The signatories to Thursday’s agreement were the Sri Lankan Treasury Secretary, the Commissioner General of Lands, the Ceylon Petroleum Corporation (CPC), the Lanka Indian Oil Corporation (LIOC), and the Trinco Petroleum Terminal Ltd.

At a press conference held earlier, the Minister said that the State-owned Ceylon Petroleum Corporation (CPC) will get 24 tanks to develop and use independently of the Lanka Indian Oil Corporation (LIOC); 14 of the tanks, currently used by the LIOC, will be leased to the LIOC for 50 years; and the balance of 61 tanks will be managed by the Trinco Petroleum Terminal Ltd.,(TPTL) a joint venture of the CPC and LIOC to be launched soon. In the TPTL, the CPC will own 51% of the shares and the LIOC will hold 49%. The TPTL will be a subsidiary of the CPC.

In effect, 85 out of the 99 tanks will be under the control of the CPC directly or indirectly. And the LIOC will manage only 14 tanks, Gammanpila said.

Tracing the history of the controversial tank farm issue, Gammanpila said that by the India-Sri Lanka Accord of July 29, 1987, the two countries were to jointly develop the tanks. India’s interest in these 99 tanks, each of which could hold 12,000 metric tons of oil, was more strategic than economic. India was wary about the tanks going into the hands of countries inimical to India. It therefore desired the development of the tanks by an Indo-Lankan joint venture.

However, no joint venture was formed and the unused tanks continued to gather dust. But on February 7, 2003, the Ranil Wickremesinghe government handed over all the 99 tanks to India on a 35-year lease. The Lanka Indian Oil Corporation (LIOC), a subsidiary of the Indian Oil Corporation (IOC), developed some tanks and has been using 14 of them after refurbishing them at a cost of US$ 1 million per tank. As a lease payment, LIOC has been giving US$ 100,000 per year.

In 2017, when Ranil Wickremesinghe was back in power as Prime Minister, an attempt was made by his government to take a part of the tank farm on lease from the LIOC. But this move was unsuccessful.

Asked if the CPC, which is a loss-making public sector undertaking, has the money to refurbish the tanks it will take over, the Minister said that all the tanks will not be refurbished and used at one go. It will be done step by step and added that the cost of refurbishment per tank, is not unbearable. “It costs US$ 1 million per tank, and that is affordable,” he said.

There are indications from the Sri Lankan government that in view of the security concerns India has vis-a-vis the oil tanks, Colombo will give a “written assurance” that nothing will be done in regard to the tanks which will endanger India’s security. 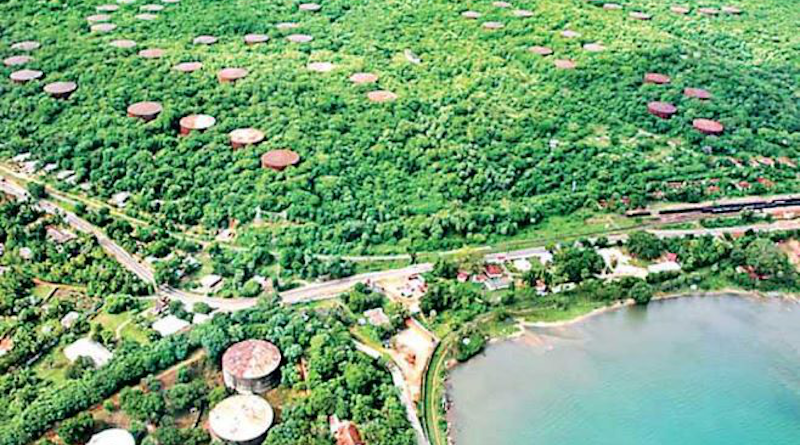