A long and determined effort by the political parties of the Tamil-speaking communities in Sri Lanka to jointly write to the Indian Prime Minister Narendra Modi seeking his good offices to persuade Colombo to address the political grievances of the Tamils and the Muslims, has failed.

The Indian Origin Tamil (IOT) parties led by Mano Ganeshan and the Sri Lanka Muslim Congress (SLMC) led by Rauff Hakeem, had objected to certain demands and references in the draft saying that these were inimical to their political interests.

The IOT parties said that the demand for federalism could not be put forward by them because such a demand would alienate the majority Sinhalese, among whom they have to live and seek their political fortune. The IOT parties also have a tradition of becoming part of the government of the day and, therefore, they cannot take very antagonistic positions.

IOT leader Mano Ganeshan said that the majority Sinhalese community would dub the demand for federalism as anti-national and use it to oppose all the demands of the Tamils. The IOT parties wanted the letter to the Indian PM to focus on the retention and full implementation of the 13th. Amendment (13A) of the Sri Lankan constitution. The 13A appears to be headed for repeal or a severe pruning if the Gotabaya Rajapaksa government goes ahead with its plan to draft a new constitution for Sri Lanka. The 13A gives the Sri Lankan Provinces a modicum of powers under a Unitary constitution. Even these limited powers might be taken away.

The IOT believe that India’s help could be legitimately sought only for the retention and full implementation of the 13 A because it flowed from the India-Sri Lanka Accord of 1987 signed by the then Indian Prime Minister Rajiv Gandhi and the then Sri Lankan President J.R.Jayewardene in July 1987.

However, the reference to the Indo-Sri Lanka Accord in the letter irked the SLMC leader Rauff Hakeem who said that the Accord had manifestly neglected the Muslims. Also, the Muslims of the Eastern Province would not support the merger of the Northern and Eastern Province (as the Tamils have been demanding) because merger would make the Muslims a minority in a united province and further exacerbate their minority status in Sri Lanka as a whole.

Not wanting to dilute the draft letter to the Indian PM as per the wishes of the IOT and the SLMC, the parties of the Northern and Eastern Sri Lanka, the home of the Sri Lankan Tamils, decided to sign the letter dated December 29, 2021. These parties plan to hand it over to the Indian High Commissioner Gopal Baglay next Tuesday or Wednesday.

The Tamil National Peoples’ Front (TNPF) led by Gajendrakumar Ponnambalam kept out of the entire exercise because it felt that the 13A has no place even as a temporary arrangement or as the first step towards a federal structure. The only solution the Tamils should fight seek is full federalism, according to the TNPF.

Explaining his position, IOT leader Mao Ganeshan said that the original idea was to present a common front with a common set of demands, in other words a “Common Minimum Program” (CMP) to the Indian PM. The CMP could not include divisive issues, he said. He also felt that the letter to the PM should be short and not 13 pages. There is no need to recall the past in detail as these are known to the Indian Establishment very well, Ganeshan added.

He was at pains to stress that at the moment, there is a crisis situation as regards the 13A and this has to be met urgently with the good offices of the Indian Prime Minister. Therefore, the one and only focus of the letter should have been the 13A.

On the contrary, the ITAK strongly felt that the demands of the Tamils could not be confined to the 13A, which, in any case, could only be a starting point. The case of federalism could not be lost sight of at any point of time.

Therefore, the letter said that the “Tamil-speaking people remain committed to a political solution based on a federal structure that recognizes their legitimate aspirations.”

Calling for the unification of the Tamil Homeland, the letter pointed out that the Tamil speaking peoples have always been the majority in the North and East of Sri Lanka, thereby calling for a merger of the Northern and Eastern provinces.

On the 13A, the letter said that it was introduced into a Unitary constitution “making the exercise one of decentralization instead of devolution.” It pointed out that since 1987, the North-Eastern Tamil parties have been moving towards a federal structure in their campaigns.

Giving the landmarks, the letter said that at the Oslo peace conference between the Sri Lankan government and the LTTE, the Sri Lankan delegate, G.L.Peiris, had said that the two parties had agreed to “explore a solution founded on the principle of internal self-determination in areas of historical habitation of the Tamil-speaking people, based on a federal structure within a united Sri Lanka.” When Mahinda Rajapaksa was President, he told the visiting Indian Foreign Minister S.M.Krishna, that Sri Lanka would go “beyond the 13A”. And in an address to the Sri Lankan parliament, Indian Prime Minister Modi had said that he was a “firm believer in cooperative federalism.”

It was against this background the letter to the Indian PM, finalized by the North Eastern Tamil parties, sought Indian help to make the Sri Lankan government “fully implement the provisions of the 13A and implement the clear commitments made by all sections of government from 1987 onwards.”

A leader of one of the North Eastern Tamil parties said that the IOT parties had “agreed” to the draft letter initially and that it was the North-East-based Ilankai Tamil Arasu Katchi (ITAK) that was putting spokes in the wheel. The ITAK did not want the credit for getting the various parties together to go to the Tamil Elam Liberation Organization (TELO) leader Selvam Adaikalanathan.

The source also said that Mano Ganeshan finally opted out because of the insults hurled at the IOT community by an ITAK leader, S.Sritharan. The source also alleged that ITAK leader M.A.Sumanthiran had continuously worked to scuttle the bid to write to the Indian PM because he felt that the Indians would not help the Sri Lankan Tamils to achieve their goals and that it would be better to seek American help.

But IOT leaders said that their information was that the US would concentrate on wartime accountability and human rights issues, and leave the other political issues to India, the regional power. 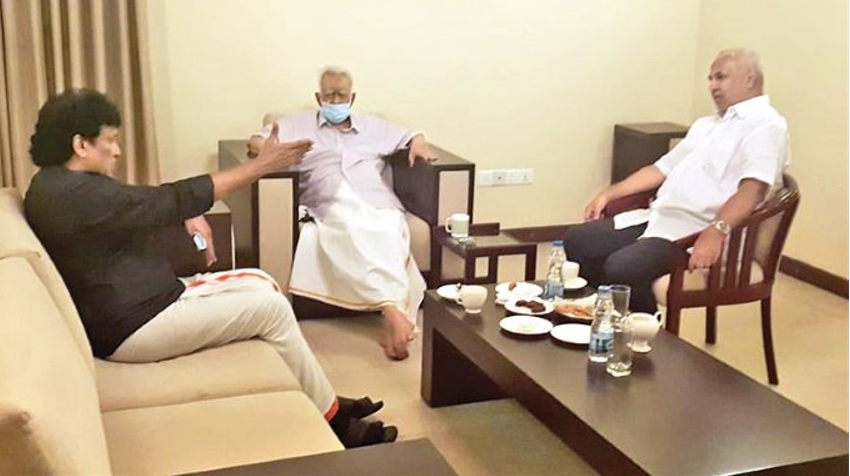