What prevents de-escalation and who benefits?

The Ukraine Russia border is currently the most dangerous point of conflict internationally with 100,000 Russian troops massed on the Russian side of the border, the US planning troop deployment and Ukrainian forces on high alert. Presidents Biden and Putin as well as the Secretary of State Blinkin and foreign minister Lavrov have been talking in an effort to de-escalate. But this has not happened so far.

The US says that Russia wants to invade Ukraine and if it does they will face severe debilitating sanctions. The US and EU believe that Ukraine has a right to join NATO as a sovereign nation. Russia says that it will not invade Ukraine, but they cannot accept Ukraine joining NATO as NATO missiles on its borders would threaten Russian security and they want a legal document reassuring them to that effect. So what is behind this standoff? What will happen and what can be done?

The reason that Putin has dug in his heels at the frozen Ukraine border is that Russia no longer trusts the US / NATO promises. Russia for years has been ready for compromises with NATO if their security is also guaranteed. However there is a trail of broken promises:

i) Gorbachev was promised that NATO would not expand eastward during his talks with the US Secretary of State in 1989. But ten former central east European states joined NATO and have military bases.

ii) The Organization for Security and Cooperation in Europe in cooperation with Europe's Paris Charter signed a mutual cooperation agreement for steps forward in peace and security with Russia in 1990.

iii) Yeltsin made several concessions from 1990–1993 to accommodate NATO positions, including in Serbia.

iv) In 1994 the Russia NATO Partnership for Peace was signed and they had shared joint exercises and peacekeeping.

v) 1997 the NATO–Russia Founding Act made a commitment that both NATO and Russian security would not be undermined.

vi) The 1999 OSCE European Security Charter spoke that the security of countries in Europe would not be undermined one at the expense of the other.

vii) After the 2001 WTC attacks and war on terror, Russia was supportive of US concerns. In 2002 the Russia–NATO Council was established giving Russia an equal role in shaping policies toward terror threats. But the West had a triumphalist position and did not respond to Russia at the time.

With such a record, when the US is wooing a crisis torn Ukraine, Putin has decided to dare Ukraine, the EU and NATO with a show of strength. For the Russians NATO missiles on their border seconds away from Moscow is a red line.

A Russian invasion of Ukraine is illogical, as Russia has already got what it wanted from Ukraine and invading it will be a catastrophe that Russia does not want. Russia already dismembered Ukraine and the various crises are embedded in the intertwined history of the two countries. After Russia and Ukraine collectively declared independence in 1990, two major regions within Ukraine, Crimea and the Donbas where almost the entire population is ethnic Russians and Russian speaking found themselves a minority in a new country. With rising Ukrainian nationalism and the removal of Russian as an official language, movements asking for autonomy and secession and accession to Russia started in these Russian ethnic provinces.

Crimea on the Black Sea historically was always part of Russia but was gifted to Ukraine in 1956 as all were within the Soviet Union. In a referendum organized by the Crimean parliament an overwhelming majority voted to secede from Ukraine and join Russia. This gave Putin the opportunity to support this move, send Russian forces and Crimea became part of Russia. In the Donbas region after years of civil war, the two ethnic Russian majority regions of Donetsk and Lugansk were given autonomous status under the Minsk Agreement of 2014 and 2015. In fact the solution to the current standoff can come from these Minsk Agreements that were signed by the EU, Ukraine and Russia.

So what prevents de-escalation and who benefits? First are the two opposing narratives and positions between the US and Russia as outlined above that appear intractable. Second are leaders with domestic pressures like a domestically weakened Biden, an autocratic Putin facing economic stagnation and declining popularity, various NATO heads of government whose domestic ratings could do with some diversion and mobilized nationalisms.

Meanwhile Europe is divided, with no appetite for a violent conflict on its soil and decreasing interest in NATO or paying the price for more security offences. Sanctions on Russia will surely cripple Russia, even though they have been preparing for economic isolation for several years and they have allies with whom they can engage economically. History has shown that unilateral sanctions hurt people but not regimes.

Most critically the worst sufferers in the conflict without end that this can become will be the people, on all sides but especially in Ukraine, who will be impoverished and become aid dependent. It will also put great strain on the economies and ordinary people of all European countries. The damage to the climate with military deployment will be huge, incalculable and irreversible. The rise of a neo Nazi right already present in Ukraine, Europe and many other parts of the world will only accelerate and there will be a blow to values of human security and sustainable development.

It is therefore in the interest of people committed to peace, social justice, climate and ecological security to push their leaders toward a common and collective security, de-escalation and long term solution. A new cold and hot war is detrimental to people and the planet and they need to pull out the stops to stop this.

Professor Anuradha Chenoy is former Dean of the School of International Studie Jawaharlal Nehru University. She was also chairperson and director of the Centre for Russian and Central Asian Studies. 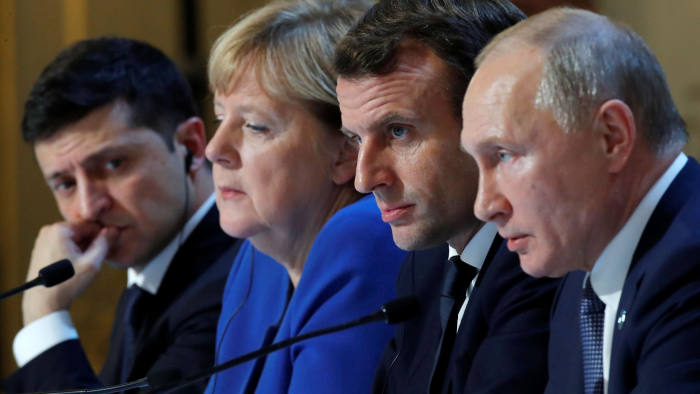