The three-day conclave in Oslo on January 23-25 for interaction for a core group of Western diplomats with Taliban officials marks a new phase in the political situation in Afghanistan. The West was represented by the US, UK, Germany, France and Italy as well as the European Union.

Norway is uniquely placed to reconcile alienated parties. Apart from its strong intelligence system in Afghanistan, Norway has carved out a niche for itself in international diplomacy in diverse theatres such as Mozambique, Venezuela, Colombia, the Philippines, Israel and the Palestinian Territories, Syria, Myanmar, Somalia, Sri Lanka and South Sudan.

In the absence of an active intelligence station in Afghanistan, CIA and MI6 depend on inputs from the Norwegian Refugee Council, which has an extensive network of thousands of field workers. The NRC has keept up an enviable working relationship with the Taliban over the years.

The NRC secretary-general Jan Egeland was present during the conclave held behind closed doors at the Soria Moria Hotel, on a snowy hilltop outside Oslo surrounded by forests which used to be a sanatorium to rejuvenate wounded minds and tired bodies.

Egeland’s remarks to the media perhaps gave the best insight to what transpired at the snowbound Soria Moria Hotel where the Taliban delegation and western diplomats spent 3 days together in total seclusion. Egeland forcefully argued:

“The sanctions are holding us back. We cannot save lives without lifting the sanctions. They are harming the same people that NATO spent billions of dollars defending until August.”

“We must talk to those who have control in countries where people are in need (of help). We talk to those who make it possible for us to save lives, we do that everywhere. They are the actual authorities in the country. And they see how the economy is now about to collapse and the enormous need to bring in aid from western countries.”

Egeland said calling the talks “a step in the right direction.” The leitmotif of the conclave was the dire humanitarian situation in Afghanistan and the collective West’s response to it. However, such lavish hospitality — a private jet was sent to Kabul to fetch the Taliban officials — and engaging the Taliban in a western capital was sure to evoke indignation and protests.

Therefore, the human rights situation also figured in the talks. The general talk for sometime has been that coinciding with the Nauroz festival on March 20, Taliban would make some announcements to accommodate the human rights activists in regard of the rights of women and girls in Afghanistan.

Equally, there is the vexed question of an “inclusive government” in Afghanistan, which the Taliban had promised. Again, the Norwegian hosts arranged a separate session for “the representatives of the Afghan civil society.”

The interaction between the Taliban and the “chosen seven” ended in a joint statement expressing hopes and intentions “to work together for better political, economic and security outcomes in the country.”

Without doubt, the Taliban’s priority lies in realising the twin-objectives of removal of western sanctions against its leaders and international recognition for the government. Conceivably, the Taliban delegation led by acting foreign minister Amir Khan Muttaqi and the western diplomats (who included the US special representative Thomas West) had detailed exchange of views in this regard. Muttaqi sounded pleased: “Norway providing us this opportunity is an achievement in itself because we shared the stage with the world.”

All that Foreign Minister Huitfeldt would say was, “The meetings here in Oslo provided a good opportunity for Western countries… to make clear what they expect of the Taliban. If we are to help the population and prevent an even worse humanitarian crisis, we must have dialogue with the de facto authorities in the country.”

She said “the values and policies of the Taliban are vastly different from our own. But we have to work with the world as it is. We believe it is important to have talks of this kind with the Taliban.”

But Huitfeldt insisted: “Let me stress that facilitating talks such as these in no way represents a legitimisation of the de facto authorities in Afghanistan… We know the Taliban will actively defend their own interests – and are seeking legitimacy… We have issued clear demands, and now we must wait and see if they deliver on what they have said.”

In Huitfeldt’s words, “Face to face, in a safe place, they were given a clear message: legitimacy must come from the Afghans themselves, and it requires reconciliation and a more inclusive form of government… Reconciliation between Afghans – and creating a framework for increased Western engagement with the Taliban – will take time, and will depend on many more people than were in the meeting room here in Oslo. But the talks will have ripple effects… They establish points of contact.”

The western diplomats reportedly placed “tangible demands” in front of the Taliban and will “follow up on and see if they have been met.”

What is the big picture here? At its most obvious level, Washington feels a renewed sense of urgency about Afghanistan against the backdrop of its rivalry with Russia and China. Russia and China’s preoccupations over Ukraine and the Winter Olympics respectively have come handy for scheduling the event in Oslo.

Indeed, the recent deterioration in the relations between Pakistan and Afghanistan gives an opportunity for the West to engage the Taliban in a setting free of Pakistani interference. Finally, a format of dialogue has been created, which completely bypasses the regional states.

But then, the regional states only should take the blame. They have had a free hand to influence the Taliban government but they kept waffling and lacked a unified purpose. Simply put, the Western powers have occupied a vacuum rather than displaced the regional states.

This will have consequences. Clearly, the US doesn’t want the Taliban to pivot to Moscow or Beijing. To that end, it will establish an effective presence in Afghanistan through the Western NGOs, humanitarian aid groups and international agencies.

By incrementally reducing its pressure on the Taliban in the period ahead, Washington hopes to leverage its policies. Washington gets a free hand now to use political, economic and international instruments with a view to just about keeping the Taliban government running. It is not in the US interests if any of the regional states dominates Afghanistan.

Put differently, the financial and humanitarian aid to Afghanistan will be used as instrument in such a way that the Taliban government can remain in power without having to lean towards its neighbours. Of course, the Taliban always desired to normalise relations with the US and will be manageable.

Indeed, such a strategy will make it even more difficult for the neighbouring states to decide what to do. The most reasonable course for neighbouring countries would have been to reach a coordinated approach to recognise the Taliban. Pakistan tried hard to prevail upon Russia and Iran. But, as the Oslo conclave shows, that is a moot point today. 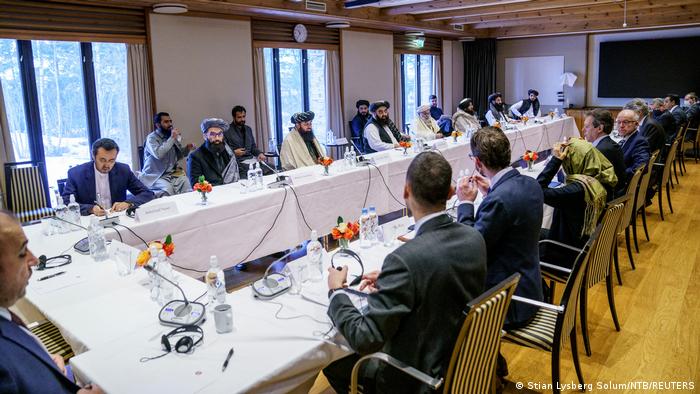