Biden teams up with Germany

Americans use the slang “lockstep” recalling a characteristic trait of their prisons of the 19th century when inmates had to shuffle step due to the chain that linked their legs. But the US President Joe Biden used that powerful evocative metaphor to convey on Monday that his country and Germany are aligned on fighting any Russian aggression in Ukraine.

“Germany is one of America’s closest allies,” he said, adding the two nations were “working lockstep” to address the alleged Russian aggression. Biden was speaking ahead of his bilateral meeting with new German Chancellor Olaf Scholz at the White House.

For Russia, “lockstep” is a horrific 20th century metaphor that harks back to Nazi Germany. Disregarding the pejorative tone, Biden casually tossed it around to drive home German-American solidarity and discipline. Scholz simply responded, “I’m looking forward to working closely together with you.” Scholz said the US is one of Germany’s “closest allies.”

Much has been made out of Scholz’s reluctance to mention the Nord Steam 2 project at this joint press conference with Biden. But did it really matter? Biden spoke for him, suggesting firmly that the Nord Stream 2 issue should not get in the way of ties with Germany.

Indeed, Biden, who’s been a leading figure in American foreign policy for nearly half a century, recognises the delicate politics Scholz is facing with the project. He also knows Scholz is new to his job and is unable to unite the transatlantic alliance in a response to Russia, as his predecessor Angela Merkel would have.

Overall, Biden has reason to feel pleased that the relations between the US and its European allies are strong despite apparent disagreements on certain aspects of a response to Russia. Fundamentally, the alliance agrees that a Russian military intervention in Ukraine cannot go unchecked.

Washington is also not losing sleep over the French-led talks with Russia and sees President Emmanuel Macron’s efforts to engage with the Kremlin as a way to amplify France — and therefore himself — as a more influential player than Biden or Boris Johnson. Macron is only two months away from the presidential election where he seeks a second term.

After the visit to Moscow, Macron traveled to Kyiv on Tuesday. He told reporters that “the next few days will be decisive and will require intensive discussions which we will pursue together.” But Moscow cannot be in two minds that when the chips are down, the US’ allies will inevitably line up behind Biden, as history testifies.

The unknown unknown, if at all, is how the allies might react if the Russian intervention were to fall short of a large scale military move and is limited to, say, an operation confined to the Donbass region of Ukraine. This probably explains why Scholz would not publicly commit on the future of Nord Stream 2 pipeline.

The CNN speculated that Scholz would have reached some sort of understanding with Biden. The point is, German economy is closely tied to Russia’s, and scrapping the Nord Steam 2 could hit it hard as well as Scholz’s political standing.

At such a sensitive juncture, it is also part of Washington’s tool box to confuse Moscow by playing the good cop, bad cop. The so-called Berlin Declaration of the Weimar Triangle between Germany, France and Poland on Tuesday called on Russia “to de–escalate the situation at the Ukrainian border and engage in a meaningful dialogue on security on the European continent.”

It said, “France, Poland and Germany express willingness to engage constructively in meaningful and result–oriented discussions on security issues of mutual concern.” Yet, it added, “In line with the Alliance’s dual–track approach the leaders agreed that the Alliance needs to continuously keep its deterrence and defence posture under review and be ready to adapt as necessary to a further deterioration of the security environment, including in the framework of NATO’s enhanced forward presence.”

The moribund Weimar Triangle’s sudden appearance can only confirm Moscow’s such a suspicion that Washington is playing games. While Germany and France have so far opted for a more diplomatic approach towards Russia and continuously emphasised the need to resume dialogue with Moscow, Poland has taken a tougher stance. The trilateral format is a clumsy attempt to recalibrate Europe’s approach to the Kremlin.

Clearly, Russia is being wooed by such diverse quarters in the West, in different permutations and combinations. British Foreign Secretary Elizabeth Truss is landing in Moscow on Thursday and Scholz himself next Tuesday. But on the core issues as such, namely, NATO’s rollback and Russia’s security demands, there is no movement.

In fact, none of these countries — UK, France, Germany or Poland — is even qualified to negotiate the core issues with Russia. At best, they can provide an “exit route” for Russia to “de-escalate” by withdrawing troops far away from the Ukraine border, without loss of face.

Frustration is building up in Moscow. The Foreign Ministry lashed out at Germany today calling it an “occupied state” where American ambassadors “are giving orders to German officials” and are “backed up by 30,000 American boots on the ground.”

The Foreign Ministry spokesperson Maria Zakharova implied that Scholz caved in under US pressure. She said, “Germany needs this gas not because they like Russia or want to please us – they just need it, it’s what feeds their economy, it’s a resource their industrial development hinges on, it’s what they need to live, basically… a vital issue.”

Zakharova lamented that not only with Germany but with the rest of Europe too, it’s the same case. “There’s been no talk of any sovereign interests for a long time now,” as she put it.

The timing of this outburst cannot be accidental. Certainly, it deliberately scattered the “feel-good” lingering in the air following Macron’s visit. Russia is not impressed that European leaders are making a beeline for Moscow. It sees a strategy to wear it down in inconsequential diplomatic gyrations.

And, all this is while NATO is substantially building up its forces on Russia’s borders and continues to develop military infrastructure on adjacent territories. Also, the Russia-Ukraine relations are deteriorating with both sides massing large numbers of military personnel and equipment along their borders. 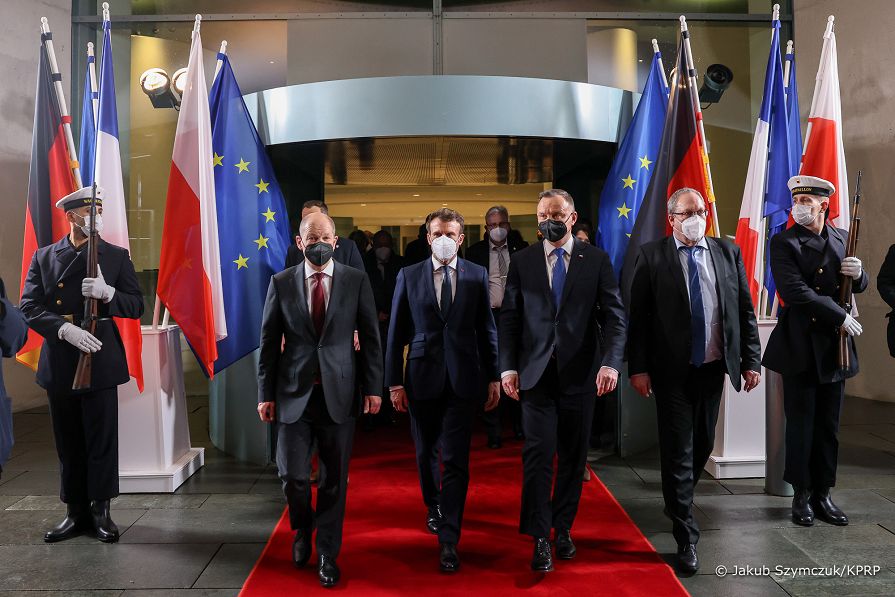