In solidarity or hypocrisy-

NEW DELHI: The attack on the satire magazine Charlie Hebdo’s offices has reiterated the need to protect media freedom. A host of dignitaries from across the world joined a march through the streets of Paris as a measure of solidarity for the victims and for the value of free speech.

At the forefront of the march was Israeli President Benjamin Netanyahu -- whose presence led to some controversy because of Israel’s attempts to curb speech against its policies in regard to Palestine. "Someone who fomented state terrorism with the death of 2,500 people in Gaza is now there [in Paris], waving at other world leaders and marching hand in hand with them," said Turkish President Recep Tayyip Erdogan.

Images such as the caricature below were widely shared on social media: 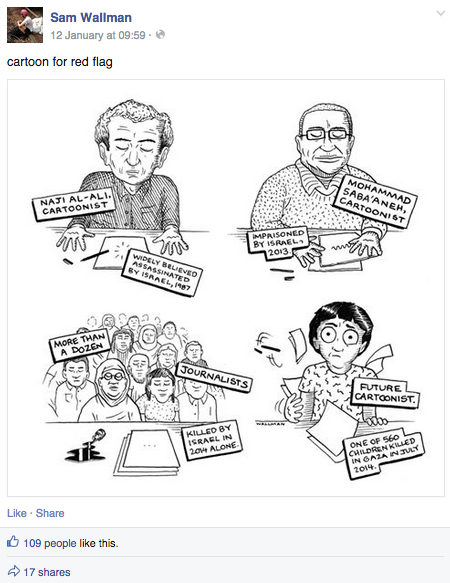 Israel in fact ranks a mid 96 of a 180 countries on the Reporters Without Borders 2014 World Press Freedom Index.

In fact, the world has a long way to go in ensuring press freedom. India ranked 140th in the list, with the Indian subcontinent witnessing the biggest rise in violence for journalists in the Asian region for the second year running. In India, a record number of eight journalists and one media person were killed in 2013. This was twice the 2012 death toll, and more than the total death-toll for Pakistan. The organisation, in its report, states: “Criminal organizations, security forces, demonstrators and armed groups all pose a threat to India’s journalists. The violence and the resulting self-censorship is encouraged by the lack of effective investigations by local authorities, who are often quick to abandon them, and inaction on the part of the federal authorities.”

Bangladesh (146th) witnessed levels of violence against journalists with those covering the trials of former political leaders accused of war crimes during the 1971 war facing attacks and threats. Ahmed Rajib Haider was hacked to death; Sagar Sarowar and Meherun Runi were murdered; Asif Mohiuddin was stabbed and accused of blasphemy.

In Pakistan (158th) too the government seems powerless against the Taliban and other armed groups who routinely threaten and attack journalists, reporters and commentators. Seven journalists were murdered in 2013, of which four were killed in Balochistan, earning it the reputation of Pakistan’s deadliest province.

In Sri Lanka (165th), the report focused on Uthayan - which was the target of two violent attacks within the space of 10 days in April. Two of its employees were injured, its printing press was set on fire and the premises were badly damaged. Uthayan received a Reporters Without Borders Press Freedom Prize, remaining the only Tamil newspaper not to suspend publishing at any time during the civil war in Sri Lanka. Six of its employees have been killed in connection with their work.

In Nepal (120th), the run up to the November elections witnessed a more aggressive stance from party workers toward critical journalists. Burma is ranked (145th) with the report expressing caution about whether the improvements in media freedom, such as the launch of eight new dailies in 2013, will be sustainable.

The report highlights the link between armed conflict and declining media freedom, with Syria (177th) being an extreme case of this since March 2011. The Syrian crisis has had repercussions in the region, affecting media polarisation in Lebanon (106th), Jordan (141th), and Iraq (153rd). This negative correlation is also seen in other conflict ridden countries such as Malu (122nd), the Central African Republic (109th), the Democratic Republic of Congo (151st), Somalia (176th), and Nigeria (112th).

Media crackdown in Egypt following Mohammed Morsi coming to power had placed the country at 159th, and continuing prosecution even after the army’s return to power has left Egypt’s ranking unchanged.

The report states that, “Countries that pride themselves on being democracies and respecting the rule of law have not set an example, far from it. Freedom of information is too often sacrificed to an overly broad and abusive interpretation of national security needs, marking a disturbing retreat from democratic practices. Investigative journalism often suffers as a result.”

It cites the United States as an example, with the country falling 13 places to 46th place for its efforts at tracking down and prosecuting whistleblowers and sources for leaks. The trials of Bradley Manning and pursuit of NSA analyst Edward Snowden and their role in the disclosure of sensitive information is described by the report as “being in the public interest.” The Department of Justice’s seizure of Associate Press phone records, New York Times Journalist James Risen who is subject to a court order to testify against a former CIA employee who is accused of leaking information, and freelance journalist Barrett Brown facing 105 years in prison for posting information hackers obtained from intelligence company Stratfor, are all cited as examples of threats to media freedom.

The United Kingdom (33rd) is criticized for the “disgraceful pressure” on the Guardian newspaper by its detention of David Miranda, journalist Glenn Greenwald’s partner and assistant. The report states, “both the US and UK authorities seem obsessed with hunting down whistleblowers instead of adopting legislation to rein in abusive surveillance practices that negate privacy, a democratic value cherished in both countries.”

In the Americas, Guatemala fell 29 points to 125th place as it witnessed a two fold increase in attacks against journalists, including four murders. The US, as mentioned above, fell 13 points to 46th place. This was equalled by Paraguay that fell 13 points to 105th; the country had already plummeted last year, following a coup in June 2012, three years after a coup sent Honduras (129th, -1) to the level where it remains in the current post-election chaos. In Africa, the two most noteworthy falls, by Mali and Central African Republic, were due to armed conflicts mentioned above. In Burundi, where a presidential election is imminent, the senate passed a law restricting the freedom of journalists. In Kenya (90th, -18), the government’s much criticized authoritarian response to the media’s coverage of the Westgate Mall attacks was compounded by dangerous parliamentary initiatives, above all a law adopted at the end of 2013 creating a special court to judge audiovisual content.

The past year was marked by laudable legislative developments in some countries such as South Africa (42nd, +11), where the president refused to sign a law that would have endangered investigative journalism. Panama (87th, +25), Dominican Republic (68th, +13), Bolivia (94th, +16) and Ecuador (94th, +25) all witnessed improvements, although in Ecuador the level of media polarization is still high and often detrimental to public debate.

In Georgia (84th, +17), the 2013 presidential election was less tense that the previous year’s parliamentary elections, which were marked by physical attacks and hate campaigns against journalists.

The report comments on Israel’s 17 place rise by saying it must be offset against its 20-place fall in the 2013 index as a result of Operation “Pillar of Defence” in November 2012, when two Palestinian journalists were killed, and the many raids it carried out against Palestinian media. Security needs continue to be used as an excuse to limit freedom of information. The Israeli media are able to be outspoken but media located in “Israeli territory” must comply with prior military censorship and gag orders. Investigative reporting involving national security is not welcome. Abusive treatment of Palestinian and foreign journalists by the Israel Defence Forces is common, especially during the weekly demonstrations at the Separation Wall. Many photojournalists were deliberately targeted when leaving the demonstrations in November 2013. On 4 December, an Israeli high court endorsed the seizure of equipment from Wattan TV during an IDF raid in February 2012.

The report -- released in 2014 -- does not account for Israel’s latest offensive against Gaza, that killed 2500 people in the summer.

Methodology: The World Press Freedom Index measures the level of freedom of information in each country, based partly on a questionnaire filled out by partner organisations, correspondents, journalists, researchers, jurists, and activists in each country. The research also include quantitative data such as number of journalists/reporters jailed, abducted, exiled or killed; the number of media outfits censored, etc. There are six criteria for scoring countries: pluralism, media independence, legislative framework, transparency, and infrastructure.