The Rashtriya Swyamsevak Sangh, literary meaning the 'National Volunteer Organization', is a large and widespread Indian Hindu volunteer organization with a membership of 5-6 million, the website said.

RSS is also the backbone of the ruling Bharatiya Janata Party (BJP) and Prime Minister Narendra Modi is a member of the RSS.

Bhagwat and Moragoda discussed a wide range of issues, including the age-old cultural and religious relations between India and Sri Lanka, especially between Buddhism and Hinduism, and sought ways and means through which a dialogue could be established between these two world religions both of which originated in India.

Senior office bearers of the organization were also present at the meeting.

The High Commissioner of Sri Lanka gifted two large framed photographs to the organization to mark this occasion. These photographs feature two murals from the Kelaniya Rajamaha Vihara which depict the gift of Buddhism to Sri Lanka by India.

Of these photographs, the first depicts a mural of Arahat Mahinda delivering the message of the Buddha to King Devanampiyatissa upon arriving in Sri Lanka while the second depicts the arrival of Theri Sanghamitta to Sri Lanka bearing the right-hand branch sapling of the Sri Maha Bodhi Tree.

Earlier in the day, High Commissioner Moragoda paid a floral tribute to the memorial of the late Dr. Keshav Hedgewar, founder of the Rashtriya Swayamsevak Sangh. At the Dr. Hedgewar Smarak Samiti (Hedgewar Memorial Committee) building, he also unveiled the two photographs that were gifted, in the presence of the senior officials of the Committee.

Founded by Dr. Keshav Baliram Hedgewar on 27 September 1925 in Nagpur with the intention of creating a Hindu nation, the RSS promotes the ideals of upholding Indian culture and the values of a civil society and spreads the ideology of Hindutva, to strengthen the Hindu community, the High Commission website said.

In new and similar diplomatic moves, both Colombo and New Delhi are trying to revive Buddhist and Hindu links between India and Sri Lanka. Although previous governments had also done so, the Narendra Modi government in India and the Gotabaya Rajapaksa government in Colombo have given a new impetus to this approach.

While Modi is promoting Hindutva as the most authentic Indian ideology, Gotabaya Rajapaksa has been emphasizing the Buddhist character of Sri Lanka as a whole. The two leaders see no conflict between Hinduism and Buddhism (though there is a political and territorial conflict between the largely Hindu Tamil minority and the largely Buddhist Sinhalese majority in Sri Lanka).

India is using the Buddhist link with Sri Lanka to portray itself as the closest and the most natural friend of Sri Lanka’s in the South Asian region. India has extended a grant of US$ 15 million for the promotion of Buddhist links between the two countries. The grant will assist in deepening people-to-people linkages between the two countries in the sphere of Buddhism through the construction/renovation of Buddhist monasteries, capacity development, cultural exchanges, archaeological cooperation, reciprocal exposition of Lord Buddha’s relics, strengthening of Buddhist scholarship, and supporting the clergy. However, for reasons not known, Sri Lanka is still to make use of this grant.

Meanwhile, the Sri Lankan High Commissioner in India, Milinda Moragoda, had explicitly made religious diplomacy an important part of his plans for the development of closer ties with India. In his booklet on his plans, Moragoda has advised Sri Lankan diplomats to participate in public Hindu ceremonies.

Taking a leaf from Indian diplomacy in Sri Lanka, Pakistan has also been using its Buddhist heritage to cultivate good relations with Sri Lanka where more than 75% of the people are Buddhist. Pakistan has produced a documentary and a tabletop glossy on the Buddhist Gandhara civilization and has taken Buddhist monks on trips to Buddhist sites in the Khyber Pakhtunkhwa province.

China, which had traditionally kept away from any links with religion, is now featuring Sri Lankan Buddhist ceremonies in its media. China had also organized a World Buddhist Conference at Shaanxi in 2014 to enhance its appeal among Buddhist countries in Asia. 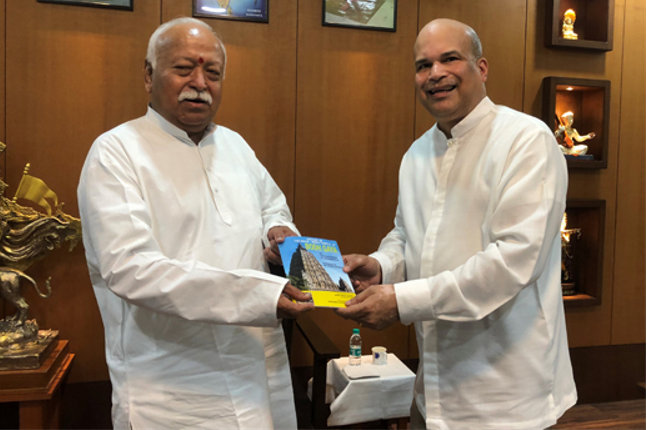