India Should Not Miss the WW 3 Pointer

The transition of India’s foreign-policy mindset during the post-cold war period from an international outlook to a national one, and then its colossal drop to a ‘mofussil’ thinking, is a tragic phenomenon. One outcome of it has been the tendency to reduce foreign policy to a single theme — India’s relations with the United States — which began after the Narasimha Rao government.

Narasimha Rao was India’s last prime minister with an erudite mind on international affairs who of course benefited from the pedagogy of Jawaharlal Nehru, who had every reason to have a world outlook while navigating the Congress through a complex period between two world wars when the country was locked in a struggle for freedom with a superpower — Imperial Britain — with an empire over which the sun never set.

That’s how Nehru got intimately associated with the Bolshevik Revolution intellectually, emotionally, personally to distil out of it great morals and signposts for an independent India.

All that is history. Since Rao, there has been a steady decline as the Indian ruling elite got entrapped in the ‘unipolar predicament,’ thanks to indoctrination by the lobbyists of America, and the fatalistic narrative took hold that we are destined to live in a New American Century.

Even after 1999 and the tragic vivisection of Yugoslavia, including the NATO’s barbaric 78-day bombing of the capital city Belgrade without a mandate from the UN, it did not occur to our ruling elite that a blood-dimmed tide had been loosed in the world order and a ‘rough beast, its hour come round at last / Slouches towards Bethlehem to be born’ — to borrow the chilling lines from the poem Second Coming by Irish poet WB Yeats.

That beast, with the shape of a lion’s body and ‘a gaze blank and pitiless as the sun’ has since moved from devouring the carcass of Yugoslavia into Afghanistan, Iraq, Georgia, Libya, Syria, Somalia, et al, and arrived in Ukraine in 2014.

It eyes the vast luscious Eurasian landmass eastward where there are many multiethnic, plural societies like Yugoslavia, big and small, with internal contradictions that make them vulnerable to dismemberment.

Yet, the Indian elite is in stony sleep — not only the ruling elite but also the opposition parties — Congress and the communist parties, in particular, who are credited with having some educated, well-informed minds at the leadership level. They think what is unfolding in Eurasia is a Russia-Ukraine issue!

Thus, Prime Minister Narendra Modi makes a phone call to Vladimir Putin on Thursday. Logically, he should have followed up with a phone call to Joe Biden, instead of leaving Ukraine issue to External Affairs Minister S. Jaishankar to sort out with his friend Antony Blinken.

Indeed, Blinken and a string of western diplomats promptly got in touch with Jaishankar, emboldened by the wrong signal that Modi’s call conveyed. Even Ukraine’s foreign minister called Jaishankar!

And then came the fateful emergency meeting of the UN Security Council on Friday, where India all but implied that it saw developments as a ‘Russia-Ukraine’ matrix — plainly put, an issue of national sovereignty and territorial integrity, war and peace.

Inspired by this trend, Modi got a phone call from Ukraine’s president Volodymyr Zelensky. It doesn’t need much ingenuity to figure out that Zelensky (who reportedly fled Kiev with his family), acted on the belief that India’s stance is up for bargaining.

Now, it is an open secret that the ex-comedian with no political experience whom fate catapulted to power in Ukraine in 2019 (thanks to an oligarch who saw potential to manipulate him), is actually a mere cats-paw of western intelligence.

Thus, Washington has decided to work on Delhi, sensing that an opportunity is at hand to confuse the Indian leadership with the American narrative — Russia has violated Ukraine’s sovereignty, must end its military operations and withdraw, blah blah.

Russia is not at war with Ukraine, but is locked in an existential struggle to avoid the fate of Yugoslavia. Period. The spectre that is haunting Putin is NATO membership for Ukraine, which the Americans have been orchestrating.

Following the CIA-sponsored coup in Ukraine in 2014, an anti-Russian power calculus emerged in Ukraine. The US’ point man for Ukraine in the Obama Administration was none other than Biden himself. He made countless trips to Kiev during 2014-2016 to fine tune that transition.

There is a scandal still brewing in US politics that Biden used his influence to secure some highly lucrative business in Ukraine for his son. At any rate, there is also personal element here for Biden — one may say, he is a ‘stakeholder’ of sorts.

Ukraine suffers from rampant corruption. Simply put, someone should have properly advised the PM that he should not enter a turf that angels fear to tread.

The core issue today is not ‘Russian invasion’. Putin has spelt out unambiguously that Russia does not intend to occupy Ukraine and that its objective is two-fold: ‘demilitarisation’ and ‘denazification’ of Ukraine.

The first one means dismantling the military infrastructure that NATO has installed on Ukrainian soil right on Russia’s doorstep. Ukraine’s defence apparatus, including its command centres, are already hooked to the NATO system.

Putin has repeatedly warned that if the US instals missiles in Ukraine, Moscow would be within 5 minutes’ striking distance. It is ‘like a knife at our throat,’ he said on Thursday.

As for ‘denazification,’ the US and European intelligence agencies are using hardcore nationalist forces in Ukraine with Neo-Nazi leanings whose parentage goes back to the Second World War when their forefathers acted as collaborators of Hitler during the Nazi invasion of the Soviet Union.

They have a score to settle with all Russians, as after the defeat of Nazi Germany, Josef Stalin had severely punished them for sedition. Unsurprisingly, these forces have been integrated as the vanguard of NATO’s offensive toward Russia. The German spy chief personally visited Kiev to give final touch for the upcoming confrontation and had to be evacuated in a special operation from Berlin!

Under no circumstances will Russia give up until the twin objectives are realised — dismantling the offensive weapon systems installed by NATO in Ukraine and, secondly, scattering the Neo-Nazi forces that act as the US’ cats-paw.

Zelensky himself is a mere frontman. He is deeply unpopular, has no political base, and is rumoured to be a drug addict and unstable personality. He doesn’t make a worthy interlocutor for Modi to discuss war and peace.

Frankly, India has no role to play. This is a showdown between the US and NATO on one hand and Russia on the other. That said, the outcome of this titanic struggle in Central Europe will remould the world order and affect India profoundly.

Russia’s defeat can only lead to its dismemberment like Yugoslavia, and ensuing US hegemony. Therefore, Russia will throw everything into this struggle. It won’t even hesitate to use its thermonuclear capability to defend itself, if need arises.

The US is setting a ‘bear trap’ for Russia using the neo-Nazi forces. It calculates that if the Russian forces get bogged down, the door opens for a NATO intervention — 175000 NATO troops are positioned already on Russia’s borders with massive firepower and air and naval formations surrounding Russia from all sides.

A NATO intervention will be tantamount to US-Russia war — that is, a world war with nuclear weapons. On Thursday, Putin explicitly warned Biden to back off. But Biden has since indicated that the NATO will continue to pump weapons into Ukraine.

He disclosed yesterday that $250 million worth arms and ammunitions, night googles, etc. (for waging partisan war by the neo-Nazi forces) are on their way to Ukraine. Biden has thrown down the gauntlet to Putin.

From this point, things can take most dangerous turns unless Biden allows the dialogue between Moscow and Kiev to proceed, as per an offer from Putin. Biden seems, however, inclined to undermine dialogue, while preaching it.

Zelensky who first accepted Putin’s offer for a meeting has since retracted at America’s behest and the Russian offensive is resuming.

India’s foreign policy establishment is not lacking capacity to anticipate developments instead of sleepwalking into them. What seems absent here is a political leadership with commitment to view developments solely through the prism of India.

There is critical need to protect our country from fallouts and preserve core interests, especially relations with Russia, given India’s huge stakes in a multipolar world order. Alas, our PR’s impromptu UN remarks Friday came as big disappointment. India croaked like a frog in the well.

Read up the profound Chinese statement at the UN Security Council to draw inspiration. China’s stakes in the outcome are no less than India’s. 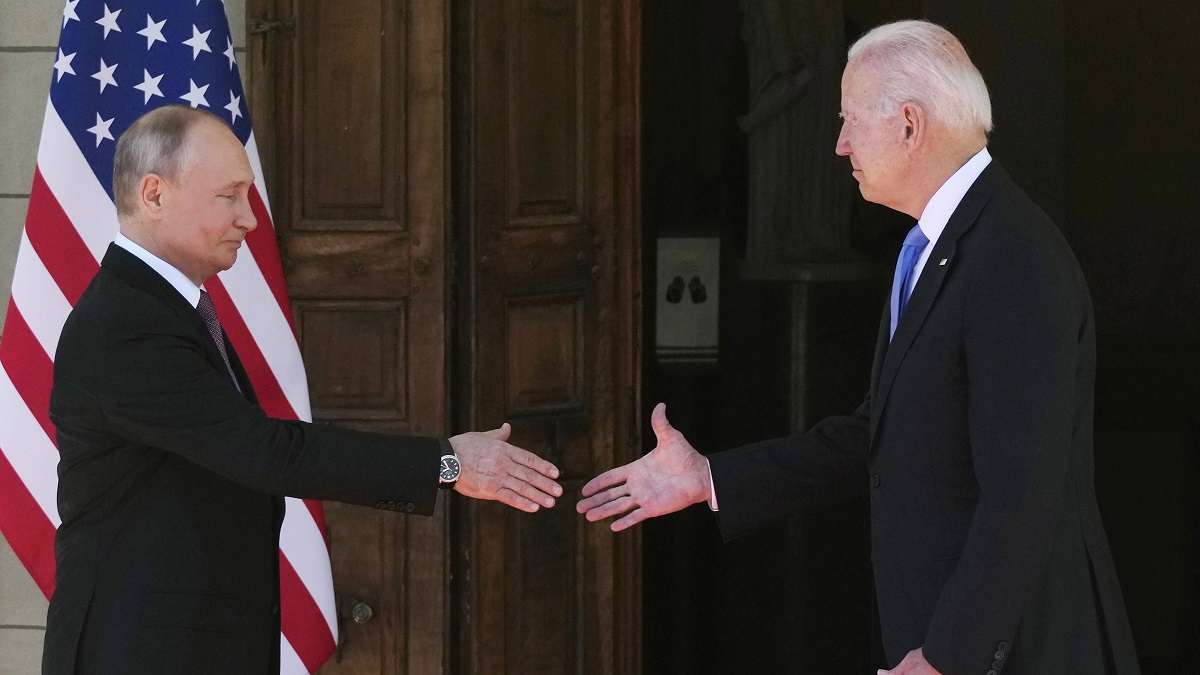