Just recently the world media featured this sweet old great grandma, 78 year old Valentina Konstaninovska carrying an AK 47 and swearing to defend Ukraine. The ‘awww’ response would have been tempered had the facts been disseminated by the same media that reported her being trained along with other Ukrainians to face the Russian troops in true journalistic fashion. However, some like the Daily Mail did point out that the shoulder-flashes worn by the soldiers on film displayed “a sinister, jagged symbol called the ‘Wolfsangel’. This is an explicitly Nazi emblem, originally used by Hitler’s ‘Das Reich’ Waffen SS division.”

As the Daily Mail UK pointed out very rightly in referring to the coverage of the current crisis “one of these opinions is the ridiculous cartoon idea that Russia is like Mordor in Lord Of The Rings, an utterly evil country ruled by a Dark Monster. And that Ukraine, its current enemy, is by contrast a shining Utopia, pluckily defending itself against the orc-like hordes of Moscow. This explains why the BBC were so keen to use this film, in which a Brave Granny Gets Her Gun. ‘Brave Granny Gets Her Gun From Some Neo-Nazis’ is not quite the same, is it?”

It isn’t. In a war that is being propagated by the world media without context or history (Read here) sides are being taken on the basis of wrong information, fake videos, half truths and coverage that presents a black and white picture justifying war and conflict. Moving away from the narrative of peace, the global media is creating a justification for violence - regardless of who is in the lead— that legalises the expansion of Nato and normalises its attacks on sovereign countries like Iraq, Syria, Libya, Yugoslavia (and of course Yemen) to name a few.

Russian President Vladimir Putin in his recent broadcast spoke of the neo-Nazis in Ukraine and his resolve to de-nazify, and of course demilitarise, the country that has wilfully become the arena for a confrontation that is essentially between the US and Russia:

“I would like to additionally emphasise the following. Focused on their own goals, the leading NATO countries are supporting the far-right nationalists and neo-Nazis in Ukraine, those who will never forgive the people of Crimea and Sevastopol for freely making a choice to reunite with Russia.

They will undoubtedly try to bring war to Crimea just as they have done in Donbass, to kill innocent people just as members of the punitive units of Ukrainian nationalists and Hitler’s accomplices did during the Great Patriotic War. They have also openly laid claim to several other Russian regions.

If we look at the sequence of events and the incoming reports, the showdown between Russia and these forces cannot be avoided. It is only a matter of time. They are getting ready and waiting for the right moment. Moreover, they went as far as to aspire to acquire nuclear weapons. We will not let this happen.

…. The purpose of this operation is to protect people who, for eight years now, have been facing humiliation and genocide perpetrated by the Kiev regime. To this end, we will seek to demilitarize and denazify Ukraine, as well as bring to trial those who perpetrated numerous bloody crimes against civilians, including against citizens of the Russian Federation.

I would also like to address the military personnel of the Ukrainian Armed Forces.

Your fathers, grandfathers and great-grandfathers did not fight the Nazi occupiers and did not defend our common Motherland to allow today’s neo-Nazis to seize power in Ukraine. You swore the oath of allegiance to the Ukrainian people and not to the junta, the people’s adversary which is plundering Ukraine and humiliating the Ukrainian people.”

There is scant reference by the global media to the neo-nazis Putin tried to spotlight in his world address. Ukraine is the only country in the world with a neo-nazi military unit, Azov. And that it is very active is confirmed by various reports, including a national guard tweet that has been training civilians against Russia for a long while now.

The Azov unit are declared ultra-nationalists, neo-Nazis with a white supremacist ideology. It’s background is interesting. It came out of two xenophobic and neo-Nazi groups, the Patriot of Ukraine and the Social National Assembly. It was formed in May 2014 and projected at the time as a volunteer group. And within months, November 2014 this group was integrated into the National Guard of Ukraine under then President Petro Poroshenko who showered high praise on them.

The unit of course denies being pro-Nazi but this is belied by its uniform that flashes the Nazi swastika and the SS signs. Despite the denial there is enough by way of interviews in the public domain from its members to underline its ideology that has created terror in parts of Ukraine. The media carried reports in January 2018 of Azov’s street patrol (national Druzyna) for law and order where it attacked the Roma and the LGBTQ communities.

Significantly in 2016 the United Nations Office of the High Commissioner for Human Rights had brought out a report where it documented the “extensive use of civilian buildings and locations by the Ukrainian military and the Azov regiment, and looting of civilian property, leading to displacement.” This was largely in Donetsk city that Putin has declared as independent now.

The report stated, “prima facie civilian buildings in Donetsk city, such as residential buildings, a shelter for homeless people 16, and a former art gallery17, continued to be used by armed groups…”

The world that has gone silent today is, however, very aware of the Azov regiment and its activities. A year after its induction into the Ukraine army Canada and the United States announced that they would not support or train this neo-Nazi unit. However, the Pentagon that often rules the White House would have none of it and Washington soon revoked the ban. And since then Azov has grown in stature and support, becoming what the Time described as the “hub for the far right across the world.”

US Congressmen have off and on tried to get Azov declared as a “foreign terrorist organisation” but to no avail. Interestingly Azov has been very active on Facebook, so much so that the social media giant was pressured to ban it. It did so, but has restored Azov now after the war began. “For the time being, we are making a narrow exception for praise of the Azov regiment strictly in the context of defending Ukraine, or in their role as part of the Ukraine national guard,” a spokesperson from Facebook’s parent company, Meta, told Business Insider.

Israel has played it both ways, and not so long ago Haaretz reported that 40 plus human rights organisations filed a petition before the High Court of Justice demanding that Tel Aviv stop exporting arms to Ukraine because these were also arming Azov. The Israeli Defence Ministry had ignored similar petitions earlier. This time around it seems that Israel has been forced to take action and has blocked the supply of arms to Ukraine currently. The Ukraine government has been very protective of Azov through the years.

“For the time being, we are making a narrow exception for praise of the Azov regiment strictly in the context of defending Ukraine, or in their role as part of the Ukraine national guard,” a spokesperson from Facebook’s parent company, Meta, told Business Insider.

Foreign fighters have been recruited in large numbers and are trained by the neo-Nazis. Estimates place the numbers at 20,000. The world has ignored this completely with the activities of violence recorded, and yet only as whispers in the global domain. There has been evidence that the perpetrators of major acts of violence in the world had received their training from Ukraine’s neo-Nazi militias but even so the support continues, and grows. 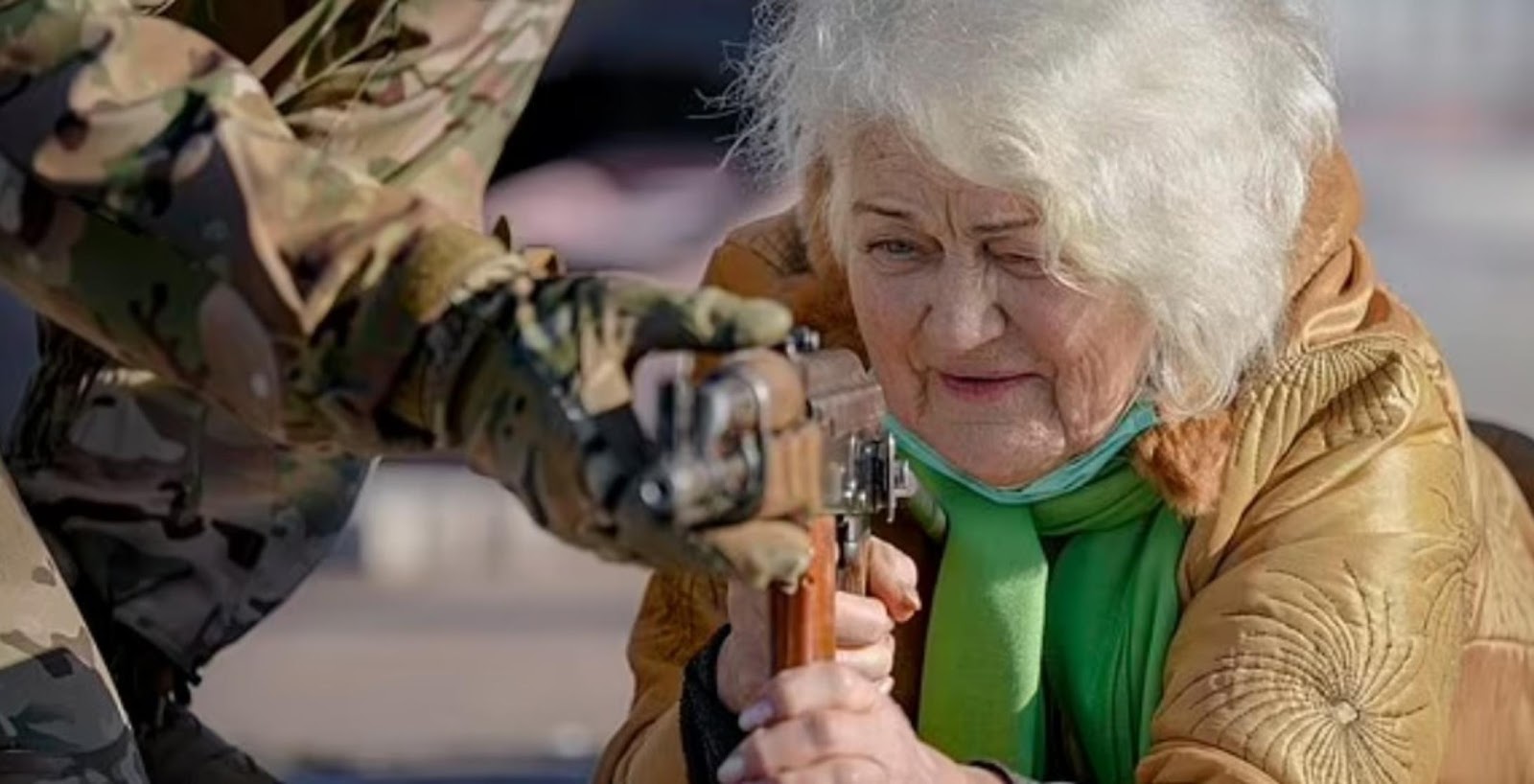